Kia Motors revealed the new Ceed ahead of its world debut at the 2018 Geneva International Motor Show. Among its enhancements, the new Ceed is available with Lane Following Assist, a ‘Level Two’ autonomous driving technology. Lane Following Assist tracks vehicles in front of the Ceed in traffic, and identifies appropriate spaces in other lanes to move in to safely to gain more ground in heavy congestion.

It detects road markings to keep the Ceed in its lane on the motorway, and controls acceleration, braking and steering depending on the convoy of vehicles in front. The system uses external sensors to maintain a safe distance from the vehicle in front, operating between 0 and 130 km/h (81 mph). 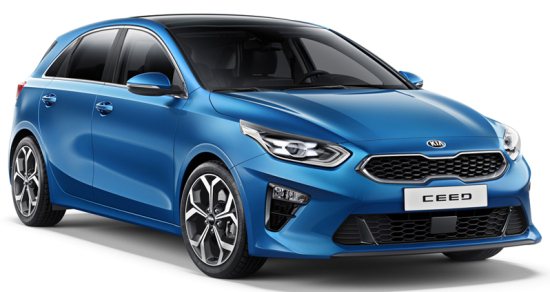 Since the first-generation Kia cee’d started production at Kia’s new Slovakian manufacturing facility in December 2006, more than 1.28 million units have been built. A new naming format—cee’d becomes Ceed—consolidates its reputation as a car for the Community of Europe, with European Design. More than 640,000 of the second-generation model have been built since production began in 2012. As it enters its third generation, the new Ceed is expected to account for an even greater proportion of Kia’s European sales.

Like its predecessors, the new model has been designed, developed and engineered in Frankfurt by Kia’s European design, product development and R&D teams. It will be manufactured at the brand’s production facility in Žilina, Slovakia, alongside the Kia Sportage and Kia Venga.

In 2006, Kia’s share of the European market was around 1.5%. In 2017, our market share reached 3.0%. Since the introduction of the Ceed, Kia’s annual European sales have more than doubled, from 225,000 in 2006 to more than 472,000 in 2017. In the medium-term, we are targeting annual sales of more than 500,000 vehicles. The Ceed model family will therefore continue to underpin the sustained growth of the Kia brand for years to come, remaining one of our best-selling product lines.

Constructed on Kia’s new K2 platform, the new Ceed is 20mm wider (1,800mm) and 23mm lower (1,447mm) than the outgoing model. Its wheelbase remains the same at 2,650mm, with the front overhang shortened by 20mm (to 880mm), and rear overhang extended by 20mm (now 780mm). The new platform supports the new Ceed’s more efficient packaging. The new model boasts a larger, 395-liter trunk, as well as greater shoulder room for rear passengers, more headroom in the front row, and a lower driving position.

The new Ceed range will be powered by a choice of powertrains. Gasoline options include an updated version of Kia’s popular 1.0-liter T-GDi (turbocharged gasoline direct injection) engine, producing 120ps, as well as a new 1.4-liter T-GDi power unit. Replacing the earlier 1.6-liter GDI engine, the new Kappa 1.4-litre T-GDi engine produces 140ps, 4% more than its predecessor despite its lower displacement. The engine’s turbocharger ensures a wider torque band than the earlier 1.6-liter engine, making it more responsive in a wider range of driving conditions while also reducing emissions. A 100ps 1.4-liter MPi (multi-point injection) engine will also be available.

Available with a choice of power outputs (115 and 136ps), the new 1.6-liter diesel produces 280 N·m of torque. Fitted with the new engine, the Ceed’s carbon dioxide emissions are expected to fall below 110 g/km on the new Worldwide Harmonised Light Vehicle Test Procedure (WLTP), when converted to the New European Driving Cycle (NEDC).

Every engine will be paired with a six-speed manual transmission, while the new 1.4-liter T-GDi and 1.6-liter CRDi engines will also be available with Kia’s seven-speed double-clutch transmission.

The cabin features a wide range of new technologies to enhance comfort and convenience for occupants. The floating infotainment system is available as either a 5.0- or 7.0-inch touchscreen audio system, or 8.0-inch touchscreen navigation system, with buyers able to specify a powerful JBL Premium sound system with Clari-Fi music restoration technology. Standard technologies include full Bluetooth smartphone integration, as well as automatic lights and keyless entry.

A Drive Mode Select system will enable owners to tailor their driving experience, with Normal and Sport modes. Drivers can use Drive Mode Select to alter the level of effort required to steer the car, while each mode subtly changes the character of the engine. Normal mode maximizes the potential for greater fuel efficiency and offers more relaxed steering inputs. Sport mode enhances throttle responses, enables faster acceleration—from a standstill and at speed— and adapts the steering to offer additional weight and more decisive responses to driver inputs.

An optional heated windshield—with nearly-imperceptible wires to gently heat the glass—makes the new Ceed easier to live with in colder months. The first time this technology has featured in a Kia, it melts away frost, ice and windscreen mist at the push of a button. A wireless smartphone charger, and heated and ventilated front and rear seats are also available.

Every new Ceed is equipped as standard with Kia’s Vehicle Stability Management (VSM), ensuring stability when braking and cornering by controlling the car’s Electronic Stability Control (ESC) if it detects a loss of traction.

The new model will make its public debut at the Geneva Motor Show in March, where a second body type will also be unveiled for the first time. The five-door hatchback will enter production in May. Sales of the new Ceed will commence exclusively across Europe at the end of Q2 2018.

Great innovation from Kia. Anyways, if you need the best windshield repair kit in the market, visit us at https://crackeraser.com