A UPS-led consortium has deployed new smart-grid charging technology in London that overcomes the challenge of simultaneously recharging an entire fleet of electric vehicles (EVs) without the need for the expensive upgrade to the power supply grid.

Recharging a fleet of electric vehicles can be extremely expensive as it often requires upgrades to the external power grid, an option not attractive to most businesses or operators. This new system will allow UPS to increase the number of EVs operating from the central London site from the current limit of 65 to all 170 trucks stationed there without the need for such upgrades. This is achieved with a smart-grid which uses a central server which is connected to each EV charge post as well as the grid power supply and the on-site energy storage. 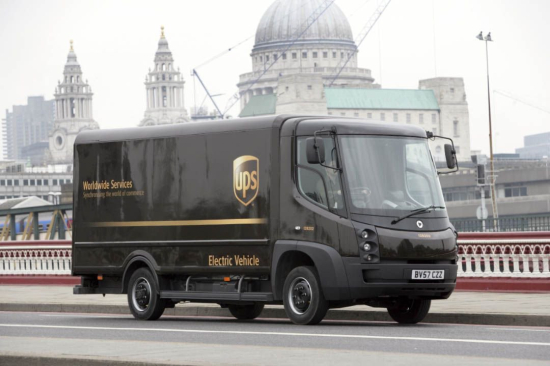 A sophisticated network capacity assessment tool takes into account time of day variation in demand. The system adopts an “intelligent” approach to charging by spreading this throughout the night so that the building can use the power it needs to run the business of logistics (lights, sortation machinery and IT) and ensure that all EVs are fully charged by the time they are needed in the morning, but at the same time never exceed the maximum power available from the grid.

As a result of this project and the learning that comes with the related investments, UPS can now tailor the lowest cost approach building by building and determine how best to adopt and charge a fully electric fleet. This will be accomplished by combining a variety of solutions including conventional power grid upgrade, smart grid, on-site energy storage with batteries and local power generation (using, for example, solar energy generated on facility roof tops).

This advance—believed to be the first time these systems have been deployed at this scale anywhere in the world—is the result of the Smart Electric Urban Logistics (SEUL) project with UK Power Networks and Cross River Partnership, with funding secured from the UK’s Office for Low Emission Vehicles. SEUL is a two-year project that commenced in April 2017.

UPS thinks this is a world first, right in the heart of a mega-city. We are using new technology to work around some big obstacles to electric vehicle deployment, heralding a new generation of sustainable urban delivery services both here in London and in other major cities around the world.

Electric vehicles are an integral component within UPS’s alternative fuel and advanced technology fleet. Our collaboration with UK Power Networks and Cross River Partnership marks a major turning point in the cost effective deployment of electric vehicles which in turn will play a key role in ensuring the global trend toward urbanization is sustainable. We are applying new technology to make the charging process smarter and our delivery service cleaner.

As a result of this initiative, combined with the advances the company announced just last month in reducing the cost of electric vehicles, UPS believes the day is rapidly drawing closer when the acquisition costs to put an electric vehicle on the road, including those associated with getting power to the vehicle, will be lower than the equivalent costs of its diesel counterpart.

This development will be instrumental in enabling electric vehicles to be deployed at scale in the world’s cities which is an essential component of tackling the air quality challenges in these urban environments.

A key part of this initiative is the use of onsite energy storage batteries. Although new batteries have been deployed at this stage, it is envisaged that in the future these could be second-life batteries that have already been used in a UPS EV. Together with the smart-grid, this will pave the way toward a UPS EV infrastructure strategy that can dynamically make use of a conventional power upgrade, a smart grid, onsite storage, and in many cases, local power generation including solar and other alternative sources.

Our previous work on electric freight vehicles has shown that local grid infrastructure constraints are one of the main barriers to their large-scale uptake. We need to find smarter solutions to electric vehicle charging if we want to benefit from the significant air quality and environmental benefits these vehicles offer, and we believe this is such a solution.

UPS has a long history with EVs, having first introduced them into its fleet in the 1930s, and, reintroduced modern EVs in 2001. Currently, UPS has more than 300 electric vehicles and nearly 700 hybrid electric vehicles deployed in Europe and the US. The company recently ordered 125 new fully-electric Semi tractors to be built by Tesla in 2019, one of the largest pre-orders to date.

Additionally, last September, UPS announced it will become the first commercial customer in the US to start using three medium-duty electric trucks from Daimler Trucks Fuso brand, called the eCanter.

These initiatives will help UPS attain its goal of one in four new vehicles purchased by 2020 being an alternative fuel or advanced technology vehicle. The company also has pledged to obtain 25% of the electricity it consumes from renewable energy sources by 2025 and replace 40% of all ground fuel with sources other than conventional gasoline and diesel, an increase from 19.6% in 2016.

It is all about smoothing out the charging power requirements across the possible charging times.
If the trucks are used 12 hours a day, then you have 13 hours to charge.
If you have a second set of batteries, you can use them in the 11 hours when the trucks are away.
This should be easy enough (!) if you have one company in charge of all the trucks, it becomes more difficult if you have a load of individuals with different (real and imaginary) charging requirements.
Ideally, people would come home from work and set the system to have the batteries charged by the time they need it next (usually work next day, or possibly later that evening). As long as people accept this, and do not insist on having the car charged at full power right away, all should work.
If you set the charging price based on the time allocated to charge, this should work out. For instance: immediate charging, 50 c / KwH, Charge by midnight, 25c / KwH, Charge by 7 am, 6 cents / KwH.

In the UPS case, it is a question as to whether it is cheaper to add batteries, or a higher capacity power input.

The really interesting part of this effort is that it implies that the power demand of the facility will be flat for much of the day.  It will go up to some level (probably minimized, to reduce demand charges) and stay there until the trucks unplug and go on the road.

This completely rubbishes the claim that "base load is obsolete".  When the bulk of the economy is managing load this way, base load plants will be the clear majority of both capacity and total generation.

There are many different ways to manage peak loads.

Where electricity is used for water and home/building heating, it is/will be possible to temporarily disconnect some of those extra loads (via current smart meters) to reduce peak loads to acceptable levels.

In many places where the majority of the e-energy used is from Hydro and Wind, it is feasible to over-equip the Hydro production plants to supply more energy for peak loads and ease off when loads are lower and/or Wind is producing more.

Of course, battery banks can also be used effectively to offset variables.

H2 electrolysers and H2 storage + FCs could do the same, specially where clean H2 would be used for FCEVs.

I know what this energy is going to be used for now, and it's not going to make practically unstorable H2 for FCEVs.  It's going to make stuff that's liquid at room temperature and can be stored for years.  That's the only way to make this work.

And no, I am not the only person who knows this.  I learned that today.