Physically, the engine is smaller and lighter than its 1.8-liter four-cylinder predecessor, which helps to lower Corolla Hatchback’s center of gravity and benefits its overall balance. The 2.0-liter is also quieter for improved Noise Vibration Harshness (NVH) with additions such as a more rigid crank case with integrated stiffener; a lighter resin cylinder head; and a ribbed oil pan.

The M20A-FKS is equipped with Toyota’s latest D-4S fuel-injection that uses high-pressure direct-injection and low-pressure PFI (Port Fuel Injection). The setup adapts its injection method based on driving conditions to optimize combustion.

The engine also features Dual VVT-i (Variable Valve Timing-intelligence), with VVT-iE (Variable Valve Timing-intelligence by Electric motor) on the intake side and VVT-i on the exhaust. VVT-iE uses one electric motor instead of oil pressure to control the variable valve timing. Together, the valve timing systems enhance power output and fuel economy, and cut harmful emissions. 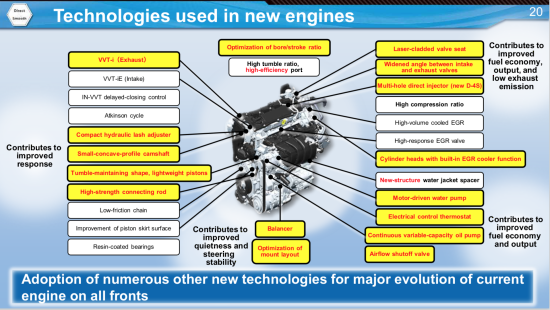 Other notable improvements to the Dynamic-Force engine include:

Having a launch gear facilitates improved transmission efficiency in lower gear ratios where belt efficiency is typically poor. The transmission system utilizes gear drive when starting from a full stop, resulting in powerful acceleration, while at the same time, resolving the momentary sluggish feeling that was previously present during accelerator operation. Both smooth and comfortable launch performance are realized. When switching from gear drive to belt drive, the transmission system uses highly responsive gear change control technologies cultivated from automatic transmission technology.

With its launch gear in place, the belt has been tuned for higher gear ratios. This new setup not only improves the efficiency of belt operation, but it also enables the adoption of wider gear ranges, thereby realizing a class-leading gear ratio range of 7.5 for the 2.0-liter class.

Another benefit of the launch gear is a reduced input load. This enables the size of both belt and pulley components to be reduced. Furthermore, the belt angle has been narrowed and pulley diameters reduced, resulting in shifting speeds that are 20% faster. Powerful and predictable acceleration is realized, as is an endearing driving experience.

But the more involved driver will be engaged by the all-new six-speed iMT with downshift rev-matching control. Compared to the existing manual transmission, the new gearbox is lighter (by 15 pounds; total weight of 88 pounds) and shorter (by 0.94 inches), making it one of the world’s smallest transmissions. Its small size contributes to improved fuel efficiency.

The gearbox also offers world-leading transmission efficiency, while the use of iMT controls, which automatically adjust engine revolutions when changing gears, ensures smooth gear shifting—free of uncomfortable recoils—for the driver.

"VVT-iE uses one electric motor instead of oil pressure to control the variable valve timing. "

Is this an entirely new concept, if so are we reducing the use of oil further. Anyway good to hear this. Engines are becoming more efficient.