The newly formed JHyM will foster the deployment of hydrogen stations throughout Japan under the guidance of the Japanese Central Government’s Ministerial Council on Renewable Energy, Hydrogen and Related Issues (“Basic Hydrogen Strategy” published in December).

In alignment with Central Government policies, the 11 founding companies joined forces to create the world’s first framework in which not only infrastructure developers and automakers but also investors are involved in collaboration, based on the common belief in the effectiveness of hydrogen and FCV for mobility and continued sustainable societal development.

To tackle the key issues raised during the beginning stage of FCV promotion, JHyM will ensure that infrastructure developers, automakers, and investors each do their part to support the successful strategic deployment of hydrogen stations in Japan, promoting effective operation, and facilitating a positive cycle of improved convenience for FCV users. The ultimate goal of JHyM is to smoothly increase the number of FCV on the road in Japan, and thus to sustainably build the hydrogen station business. 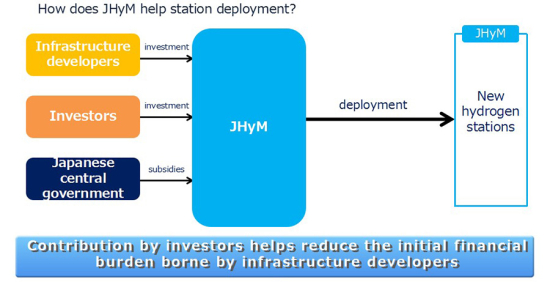 JHyM aims to complete its mission within 10 years. It intends to start building 80 stations nationwide by fiscal year 2021 in line with the Japanese Central Government’s “Strategic Road Map for Hydrogen and Fuel Cells” (revised March 2016), and to extend the network further afterward. This roadmap released by the Council for a Strategy for Hydrogen and Fuel Cells targets the completion of about 160 hydrogen stations serving around 40,000 FCV by fiscal year 2020.

JHyM will take on the following specific initiatives:

The following key roles and responsibilities are undertaken by the founding member companies of JHyM:

This may be the best way to go to accelerate the construction of 160+ new H2 stations in Japan to support the sales of more FCEVs of all sizes.

The same groups could join their efforts and resources to manufacture lower cost more efficient AWD, all weather, extended range, automated Drive FCEVs (of many shapes and sizes) in the near future.