At the Geneva International Motor Show, Volkswagen is presenting the fourth member of the I.D. Family: the I.D. VIZZION sedan. (Earlier post.) The battery-electric vehicle drives autonomously, is operated by voice and gesture control, and via artificial intelligence, will be capable of learning. Volkswagen said that the sedan will be the future top model of the I.D. Family and will reach roads by 2022 at the latest.

The I.D. Family is Volkswagen’s range of newly-developed electric vehicles with long driving ranges and visionary design that will come to market in quick succession. Three I.D. models have already been presented as concept cars: the compact I.D.; the I.D. CROZZ SUV; and the I.D. BUZZ microbus.

The I.D. VIZZION is based on the newly developed modular electrification toolkit (MEB) and underscores the technological performance capabilities of this architecture. From the outside, the VIZZION is as large as a Passat, but it offers as much space in the interior as a Phaeton. The interior has the shape and materials of a lounge.

In a vision of what may be possible by the year 2030, the I.D. VIZZION’s digital chauffeur assumes control of the vehicle without a steering wheel or visible controls. The concept car drives, steers and navigates autonomously in traffic, enabling passengers to sit back and enjoy the ride. A virtual ‘host’ knows the personal preferences of the vehicle guests and it adapts to each of them individually. Interaction with the I.D. VIZZION is possible via augmented reality and newly designed mixed reality eyewear—the HOLOLENS developed by Microsoft.

Electric all-wheel drive. The drive system components of the MEB architecture—two motors, two transmissions, the electronics that link everything together and the high-voltage battery—are incorporated into the I.D. VIZZION package.

The lithium-ion battery has an energy density of 111 kWh and is housed in the vehicle floor. This creates more interior space, lowers the center of gravity and ensures ideal weight distribution. The same applies to the two electric motors on the front and rear axles. The motor in front is a 101-hp coaxial drive, and a compact 201-hp motor is used at the rear. They develop a total system power of 302 hp (225 kW) and drive their respective axles directly. Intelligent drive control optimizes handling properties in every situation. 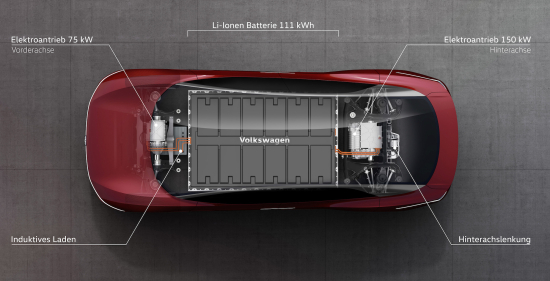 The I.D. VIZZION concept has an anticipated range of up to 650 km (404 miles) on the European cycle. The power electronics are a crucial link for controlling the flow of high-voltage energy between the motors and the battery. The power electronics convert the direct current (DC) stored in the battery into alternating current (AC). The ideal method for charging the battery is over an inductive interface. But conventional charging via a plug is also possible with the Combined Charging System (CCS), charging stations or conventional electrical sockets.

Artificial Intelligence. The I.D. VIZZION concept car has the potential of artificial intelligence incorporated into its concept. Artificial intelligence (AI) refers to programs capable of self-learning by using algorithms to recognize, evaluate and interpret patterns. Over time, these systems continue to learn more, which enables them to react to new situations.

Currently, developers define comprehensive program code that describes all aspects of system behavior. For example, Volkswagen’s Lane Assist feature uses a conventional, model-based program which precisely describes mathematical parameters for the visual recognition of lane markings. In the programing, the developers must also incorporate all sorts of deviations—such as missing or interrupted lane markings—so that they can handle all conceivable scenarios. The optical information supplied by the front camera is then compared with the mathematical description of lane markings, and if they agree Lane Assist is activated and ready to intervene.

Programs are now being trained, however, to learn very complex parameters. In this training process, they learn to deduce unknown facts based on machine learning. At Volkswagen, machine learning is being used in determining the vehicle environment by the use of peripheral cameras. For example, the cameras must recognize whether they are seeing a truck, passenger car, pedestrian or bicycle rider. To achieve this, developers feed an image recognition algorithm with thousands of pieces of training data—images of trucks, passenger cars, pedestrians and bicycle riders. It trains with images to distinguish between the different road users. This enables the implementation of new functions.

Artificial intelligence requires a program that can draw its own conclusions autonomously, which allows it to make its own decisions. The automobiles of tomorrow will operate with far fewer control elements, and with controls that can be operated fully intuitively. Assistants such as the system integrated in the I.D. VIZZION adapt more perfectly to its users from day to day.

The system recognizes their needs and tastes—such as seat and air conditioning settings and their favorite playlists—and activates them autonomously as a function of the context and situation. Hardware and software will be optimally synchronized by the Volkswagen car's artificial intelligence. For autonomous driving, this also includes the essential laser and radar sensors, cameras and electronic control units. They independently share the data and derive the right driving manoeuvre based on their own decisions.

Fully Autonomous Driving. With the I.D. VIZZION, Volkswagen is showing the maximum extension stage of automated driving. The I.D. VIZZION is designed for Level 5, so it drives exclusively as a fully autonomous vehicle. Consequently, there is no longer any need for a driver’s seat, steering wheel, dash panel or foot pedals.

The I.D. VIZZION detects its environment via inter-connected laser scanners, ultrasonic sensors, radar sensors for objects in the near-zone and radar sensors for long distances, front and rear cameras and side area view cameras. Traffic data is also continually obtained via the cloud and is compared with the data in the I.D. VIZZION. Future networking of vehicles with one another will also enable the Volkswagen car to utilize the swarm intelligence of the immediate surroundings and the larger environment (Car-2-Car and Car-2-X). In addition, the I.D. VIZZION integrates high-resolution digital maps into navigation.

Interior. Since the I.D. VIZZION is conceived for fully autonomously driving, there is no need for a traditional driver’s seat with cockpit; the space was designed create a lounge-like atmosphere. Four ergonomically balanced seats form the center of this world. Footrests invite guests to relax, and a bright atmosphere is created with large side windows and a continuous panoramic sunroof that runs from front to rear. To ensure that the transparency of the space is not too great, the glass surfaces can be darkened electronically. At maximum darkening, the privacy glass is nearly opaque.

The car has no dash panel, as the concept vehicle is primarily operated by gesture and voice control. In addition, all guests aboard the I.D. VIZZION can, if they wish, use a HOLOLENS which projects a virtual interface into the real space by augmented reality. However, there are still two rotary/pushbutton controls on the center console of the I.D. VIZZION (one front, one rear) to enable the intuitive manual control of functions such as entertainment volume control. These controls can also fully stop the concept car.

The virtual host recognizes its occupants by biometric facial recognition or electronic device, such as a smartphone, and is able to call up settings from the cloud via the Volkswagen ID, automatically adjusting the settings for individual occupants. The profile for the Volkswagen ID can control parameters such as seating, lighting, climate control, infotainment (including streaming services) and scents.

In addition, the virtual assistant reacts predictively to a wide variety of events and relevant points of interest. For example, if the car is approaching a traffic jam that cannot be avoided, the interactive assistant automatically communicates the new arrival time for the given destination. If there is a cafe along the route, which one of the guests would like to make use of, the assistant asks whether it should drive to the cafe or perhaps order a coffee to go and pay for it.

The car can also be interconnected with all conceivable digital devices, including fitness trackers. Via these and/or the HOLOLENS, the I.D. VIZZION tracks the vital parameters of its passengers. For example, if it notices that someone is too hot, it adjusts the temperature downward for the area of that passenger via indirect ventilation of the four-zone automatic air conditioner.

Three different travel modes can be activated on-board via the personal assistant: Relax, Active, and Family. In the Active mode, for example, the passenger can sit as usual, work, communicate, play and call up information on the drive. As soon as a guest activates Relax mode, a footrest extends out, relaxing music is played, and the ambient lighting switches to a warm color.

In addition, various scenarios can be called up via the HOLOLENS. They include the digital Business, Navigation, Entertain, Communication, and—especially for any children on-board—Learning modes. The projections that are customized for each mode are shown in the user’s visual field as augmented reality via the HOLOLENS. The Business mode, for example, makes it possible to participate in meetings by video chat or easily process e-mails and presentations. In Learning mode, children can call up games and learning apps.

This is getting closer to an AWD, all weather, extended range ADV BEV?Hope that it will be relatively affordable (around $40K to$45K USD). If so, the TESLA Model 3 will have serious competition?

German car companies are behind Jaguar also in electric cars. Renault Nissan are far ahead of germans

VW, BMW and Mercedes have t he resources and technical skill required to catch up fast with electrified vehicles.

The race to the first affordable, ultra quick charge (less than 10 minutes) all weather extended range (over 600 Km) automated drive EV is interesting.