Oil production growth from the United States, Brazil, Canada and Norway can keep the world well supplied, more than meeting global oil demand growth through 2020, but more investment will be needed to boost output after that, according to the International Energy Agency’s latest annual report on oil markets.

Over the next three years, gains from the United States alone will cover 80% of the world’s demand growth, with Canada, Brazil and Norway—all IEA members—able to cover the rest, according to Oil 2018, the IEA’s five-year market analysis and forecast. 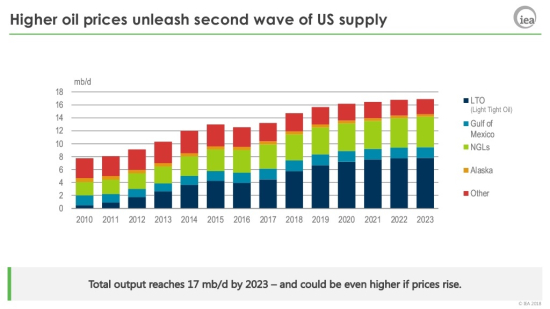 However, the report finds that despite falling costs, additional investment will be needed to spur supply growth after 2020. The oil industry has yet to recover from an unprecedented two-year drop in investment in 2015-2016, and the IEA sees little-to-no increase in upstream spending outside of the United States in 2017 and 2018.

The United States is set to put its stamp on global oil markets for the next five years. But as we’ve highlighted repeatedly, the weak global investment picture remains a source of concern. More investments will be needed to make up for declining oil fields—the world needs to replace 3 mb/d of declines each year, the equivalent of the North Sea—while also meeting robust demand growth.

Boosted by economic growth in Asia and a resurgent petrochemicals industry in the United States, global oil demand will increase by 6.9 mb/d by 2023 to 104.7 mb/d, according to the IEA. China remains the main engine of demand growth, but more stringent policies to curb air pollution will slow growth. The increasing penetration of electric buses and LNG trucks will have a bigger impact on curbing consumption of transport fuels than the electrification of passenger vehicles. 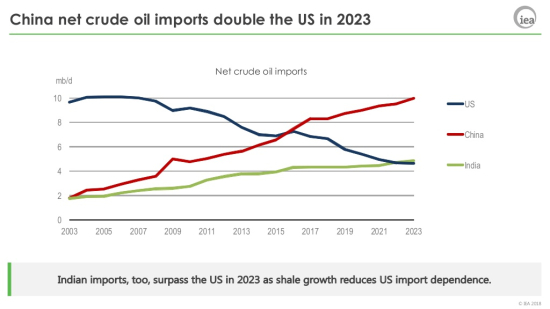 In the United States, fuel-economy standards for passenger cars will curb gasoline demand with growth coming from the petrochemical sector, which is thriving thanks to low-cost ethane. New global petrochemicals capacity will account for 25% of oil-demand growth by 2023. Meanwhile, a new marine fuel rule with lower sulfur content that will come into force in 2020 is creating uncertainty in the market.

Global oil production capacity is forecast to grow by 6.4 mb/d to reach 107 mb/d by 2023. Due to the shale revolution, the United States leads the picture, with total liquids production reaching nearly 17 mb/d in 2023, up from 13.2 mb/d in 2017. Growth is led by the Permian Basin, where output is expected to double by 2023.

The path is clear to get those additional barrels to world markets. As a result of new investments in pipelines and other infrastructure that ease the current bottlenecks, US crude export capacity reaches nearly 5 mb/d by 2020 and Corpus Christi solidifies its position as the primary North American crude-oil outlet.

Virtually all of the OPEC output growth comes from the Middle East. In Venezuela, oil production has fallen by more than half in the past 20 years, and declines are set to accelerate. Sharply falling production in Venezuela will offset gains in Iraq, resulting in OPEC crude oil capacity growth of just 750,000 barrels a day by 2023. Unless there is a change to the fundamentals, the effective global spare capacity cushion will fall to only 2.2% of demand by 2023, the lowest number since 2007.

Oil 2018 also examines a variety of other topics including crude quality issues arising from the rapid increase in US production, changing trade flows and a growing global refining capacity surplus. Global oil trade routes are moving East, as China and India replace the United States as top oil importers.

Consumption increase in China and India will/may more than offset reductions in EU and USA.

Coupled with increased use of cheap coal, environment will/may not be able to cope with associated increase in pollution and GHGs?

Recent statement by Chevron CEO says auto sales are only 25% of worldwide oil sales and EVs represent a very small reduction in the oil market.

The rest of the market is largely petrochemicals, marine and aircraft fuels. At this point EVs have made barely a dent on oil sales.