JATO: new car CO2 emissions rise for the first time in a decade in Europe; diesel down, gasoline up, SUVs up

Despite the fall in market share for diesel vehicles, BEVs have been unable to fill the gap. With the European Union seeking to reduce average CO2 emissions of new vehicles to 95 g/km by 2021, unless demand for electric vehicles rapidly increases soon, these targets could become very difficult to meet, JATO said.

With increased negative public perception towards diesels, combined with increased government regulation and scrutiny of the fuel type, the volume of diesel cars registered fell by 7.9% to 6.77 million units in 2017. In turn, diesel cars accounted for just 43.8% of total registrations in 2017, which is 11.1 percentage points lower than their peak in 2011, and the fuel type’s lowest market share since 2003, when diesels accounted for 43.4% of total registrations. 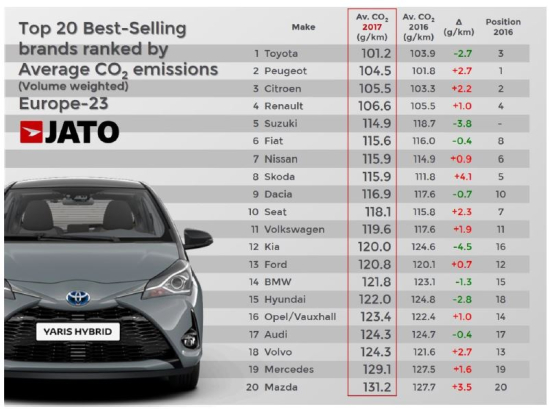 While demand for diesel cars declined in 2017, registrations of gasoline cars increased by 10.9%—the highest level since 2003. As a result, the market share of gasoline vehicles grew by 3 percentage points from 47% to 50% between 2016 and 2017.

Alternative-Fueled-Vehicles only experienced a small increase in volume. Despite the declining popularity of diesels, AFVs increased their market share from 3% in 2016 to 5% in 2017. Battery-Electric-Vehicles (BEVs) experienced meagre growth too. This could be due to consumer scepticism when it comes to the battery ranges of BEVs and the number of charging points available on the road network at present, JATO suggested. In comparison, the market share of hybrid vehicles increased by one percentage point.

The shift in fuel type from diesel to gasoline—combined with an increase in registrations in the SUV segment—is crucial to understanding the change in CO2 emissions.

The correlation between the decline in demand for diesel cars and the increase in CO2 emissions was most evident in Europe’s largest markets. Diesel demand fell by double-digits in Germany and the UK, and in France and Spain it fell by 5.4% and 8.1% respectively. As a result, average CO2 emissions increased in all of these car markets. Increased regulatory requirements, combined with higher costs for OEMs to make diesels cleaner, have helped cause this reduced demand for diesels and as a consequence increased CO2 emissions.

At a brand level, Peugeot, which led the ranking in 2016, fell to second place after its emissions average increased by 2.7 g/km to 104.5 g/km in 2017. This was mainly due to its increased presence in the SUV segment, in particular with the successful 3008, which experienced a high volume of registrations.

Toyota became Europe’s cleanest car brand amongst the top 20 best-selling brands, with its emissions average decreasing by 2.7 g/km to 101.2 g/km. This can be attributed to increased demand for its hybrid vehicle models, which represented half of all registrations for the brand, with gasoline (42%) and diesel (7.5%) cars making up the rest of its registrations. This use of hybrid vehicles by Toyota, and the drivetrain mix of the brand, implies that full hybrids may be the best alternative to diesel vehicles in the short term, as average CO2 emissions are lower, while the additional torque and power produced by electric motors when combined with internal combustion engines meet consumer demand at an acceptable consumer price point. (Earlier post.)

JATO calculates volume-weighted average CO2 emissions by multiplying the CO2 emissions rating of each car version by the volumes achieved by that version in a given timescale, totalling this product for all versions, then dividing by the total volume of all versions.