SEAT, a member of the Volkswagen Group, recently launched CUPRA as an independent, sporty, edgy brand with its own distinct identity; the brand’s first model, revealed at the brand launch event in Barcelona, was the CUPRA Ateca, an SUV equipped with a 221 kW 2.0 TSI with gasoline particulate filter mated to a 7-speed DSG.

SEAT followed this announcement less than one week later with the world premiere of the CUPRA e-Racer, a battery-electric racing touring car that is making its show debut in Geneva this week. 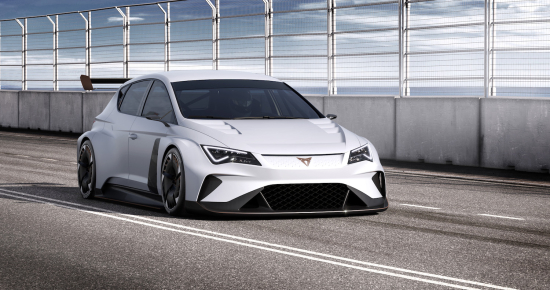 The CUPRA e-Racer is a 100% electric racing car based on the gasoline-powered Cup Racer. The CUPRA e-Racer delivers 300 kW of continuous power and up to 500 kW (680 PS) at its peak, featuring one single gear with torque vectoring and with rear wheel traction.

The 450 kg battery pack (one-third of the vehicle weight) comprises 6,072 cells, said Xavier Serra, the technical director of this project. Further, the e-Racer uses four motors, enabling “the CUPRA e-Racer to reach 12,000 revolutions, compared to the 6,500 of a petrol powered race car, and all with a single gear”, Serra said.

The CUPRA e-Racer is equipped with a new rear vision technology that is displayed within the dashboard. The vehicle uses three cameras instead of the traditional rear-view mirrors.

The CUPRA e-Racer’s intention is to exceed the performance of the conventional version to demonstrate CUPRA’s technological capabilities at all levels. Throughout 2018, specially chosen events will showcase the CUPRA e-Racer and a competition for purely electric touring cars is anticipated from 2019. The format, race duration and simply the way of experiencing these races for drivers, teams and fans will be completely different: much more active, incredibly dynamic, intense and exciting.

This is a true motorsports car. It is the first electric racing touring car in the world. By introducing a new and revolutionary car like this, we want to send to the racing world an important message: it is possible to be spectacular and also a lot of fun.