The supercar will be available for track use only and delivered to an exclusive band of customers within two years.

The modular chassis design permits a variety of powertrain configurations to provide the range and performance capabilities required by the customer. The flagship version—with a high-power 28.4 kWh Lithium-Ion Polymer battery and with two motors at the front and four at the rear—delivers maximum power of 960kW (1,287 hp / 1,305 PS) with a range of 1,170 km (727 miles) from 80 liters of diesel fuel (NEDC). The most powerful Ren RS will accelerate from 0-100 km/h in 3 seconds, onto a top speed of 330 km/h (205 mph). 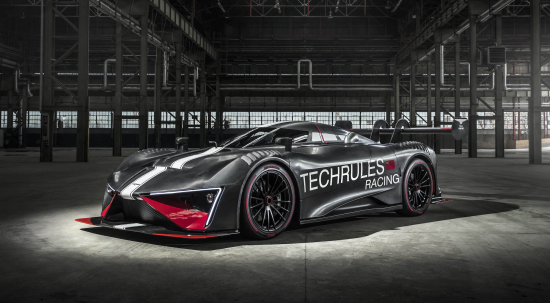 Techrules first presented its TREV technology at the 2016 Geneva Motor Show in its GT96 and AT96 concept cars. The range extender system uses a turbine to drive a generator which charges the battery pack. This in turn, provides electricity to drive the traction motors. Unlike many previously developed turbine powertrain systems, there is no direct electrical feed from the generator to the electric motors in normal operation. Only when the battery is depleted can the turbine be used to propel the car.

Air drawn into the micro turbine is passed through a heat exchanger where heat from the exhaust air is transferred to the cold intake air, and compressed before it is ignited. Ignition of the compressed and heated fuel-air mixture generates energy which is channelled at very high speeds to turn the turbine vanes. As this hot exhaust gas is expelled, it passes through the heat exchanger to ensure the heat energy is recuperated and transferred to cold intake air.

Modular drivetrain for multiple power outputs. The drivetrain can be configured with four or six axial flux, liquid-cooled electric motors manufactured by YASA in the UK. The four-motor set-up will drive all four wheels while the highest-power six-motor configuration has two motors for each rear wheel, and one for each front wheel.

Customers can choose from either one centrally-mounted high efficiency 30 kW turbine configuration, or a high-power density two-80 kW turbine set-up, with the turbines positioned either side to the rear of the cockpit.

The 28.4 kWh battery packs installed in the two lateral pods are designed and manufactured specifically for the Ren RS and incorporate battery management technologies that enable superior charging efficiency and power balancing between battery cells.

The battery management system (BMS) is integrated and designed to optimize the performance and life of the battery while ensuring absolute safety. There are three water cooling circuits for the motors, battery and inverter. A heat exchanger (radiator) pack is attached to the front aluminium chassis plate and the cooling circuits are supplied by six electric pumps also mounted on the front plate.

The resulting outputs from the various configurations available are:

Techrules is investing to grow its own research and development capabilities. Electric vehicle expert Prof Dr. Ching Chuen Chan is leading a newly established Techrules R&D center in Beijing. This facility is developing and testing core components for different types of turbines, as well as complete turbines for powertrains of commercial and passenger vehicles.

Techrules is also developing partnerships with several major China-based global corporations with interest in the micro-turbine recharging technology. Its weight-saving and range-extending capabilities making it interesting for a variety of automotive and non-automotive applications, including various industrial appliances in markets around the world.

Techrules has entered a Memorandum of Understanding (MOU) with CRRC, the world’s largest supplier of rail transit equipment. The agreement, officially signed at a ceremony during the Geneva Motor Show, will see the two companies jointly develop the TREV technology further, for use in CRRC’s environmentally-friendly Autonomous rail Rapid Transit (ART) transportation system.

In addition to the agreement with CRRC to develop the TREV technology for its Autonomous rail Rapid Transit (ART) equipment, other strategic partnerships are also in the works, the company said. These will enable Techrules to develop its TREV powertrain for use in a variety of mobility solutions, including low-emission and fuel efficient public transport and light commercial vehicles.

A partnership with new-energy bus manufacturer Wuzhoulong Motors will see buses powered by the TREV system, fueled by natural gas.

A partnership is also being finalized with Shenzhen BAK Technology Co. Ltd, a global leader in battery research and development with five percent of the global lithium battery market. The companies will jointly develop logistics vehicles powered by the TREV system, to provide a capable and cost-effective light commercial vehicle.

Design and aerodynamics. The aerospace-inspired design of the preceding 2017 Ren supercar was developed by Fabrizio and Giorgetto Giugiaro, with a unique three-seat Le Mans-style configuration. The new Ren RS has been developed further by L.M. Gianetti to create the more driver-focused single cockpit layout beneath the distinctive fighter jet-style canopy, which rises from the center of the car to allow driver access.

The depth of the front fenders above the wheels is as small as possible to reduce the frontal area, with vertical side panels and a squared-off rear minimizing drag. The side of the car is smooth and simple, and in combination with the overall aerodynamic design elements, produces a pure, flowing profile, which is punctuated only by the turbine air intakes and the turbine exhaust vent.

At the rear, the large, configurable single-foil rear wing augments the already-excellent aerodynamic function, delivering a blend of stability and variable downforce to provide optimal high-speed aero-balance during braking and cornering. The wing has been designed by L.M. Gianetti to greatly improve downforce—the aerodynamic efficiency of the Ren RS is 3.36. The other enhancements contribute to a drag coefficient of just 0.43, despite the huge downforce generated.

Engineering enhancements to boost performance. L.M. Gianetti also developed the lightweight carbon-fibre monocoque chassis to meet the demands of high-speed track racing. The overall torsional stiffness of the chassis has been increased to deliver a superior ride, superior handling and better response to driver input.

The chassis comprises a full carbon-fibre tub, similar to that used in the top echelons of motorsport, and high-strength aluminium alloy and steel components. The cockpit is topped by a protective steel motorsport-specification roll cage, chosen instead of an enclosed carbon monocoque to allow the upper structure to be specified for different race series if required.

The suspension, designed specifically for the car and manufactured by L.M. Gianetti, comprises a classic unequal length wishbone design at the front and rear. It is constructed of high strength tubular steel and Tig (tungsten inert gas) welded. The wishbones are designed to withstand the level of forces that would be experienced by GT3 racing cars.

Bespoke in-board, horizontally-mounted KW three-way adjustable coilover shock units are installed at the front and rear, and are connected to the wishbones by pushrods, similar to the configuration of a typical open-wheeled racing car.

Anti-roll bars are used front and rear and are mounted on the end plates. The front anti-roll bar system comprises an innovative geared system allowing it to be packaged into a small space.

Machined aluminium alloy side plates provide the housing for the motor reduction gearing and pickup points for the suspension. All-aluminium fittings are machined from billet 7075 grade T6 Aluminium alloy, which offers a lightweight solution and optimized resistance to corrosion.

This dedicated ECU assesses a variety of safety-related data—including speed, acceleration, steering angle and braking force—to determine what assistance is required to optimise the car’s performance.

Safety enhancements to meet FIA motorsport standards. An 80-liter FIA-certified safety fuel bladder is housed beneath the floor to store the fuel that powers the recharging turbine, positioned centrally to create a perfect weight balance. The rupture-resistant tank is foam filled and designed to prevent significant fire even when damaged.

The aluminium end plates on the front and rear of the tub incorporate mounting points for the Air Jack system, with two jacks at the front and two at the rear, to lift the car quickly and safely for pit stops or routine maintenance.

Inside, the driver sits in a protective carbon fibre race seat, manufactured by OMP to FIA-approved standards. To comply with FIA regulations, a fire extinguisher and six-point harness are also included.

To enhance driver safety further, the Ren RS is fitted with an innovative Safety Canopy Ejection system inspired by aerospace engineering. Six actuators are mounted under the cockpit bubble and controlled by the ECU through accelerometers, to automatically open the roof in case of impact or unusual yaw or pitch rate, operating at temperatures from -65° to 70°.

The actuators are electric, rather than pyrotechnic, and therefore reusable 50 times. The bubble can also be ejected manually, using safety buttons located inside the monocoque for the driver, and on the exterior for race marshals to use in an emergency.