Lexus hosted the world premiere of the new UX crossover at the 2018 Geneva Motor show. The UX marks a series of technical innovations, including the first use of the new global architecture platform GA-C, which delivers fundamental high structural rigidity and a low center of gravity, thus securing excellent ride quality and stability.

New powertrains are also deployed for the first time: a new 2.0-liter gasoline engine that reaps the performance and fuel economy benefits of high thermal efficiency; and a new mid-power, fourth-generation self-charging hybrid system. The new powertrain elements are based on the Toyota New Global Architecture (TNGA) (earlier post). 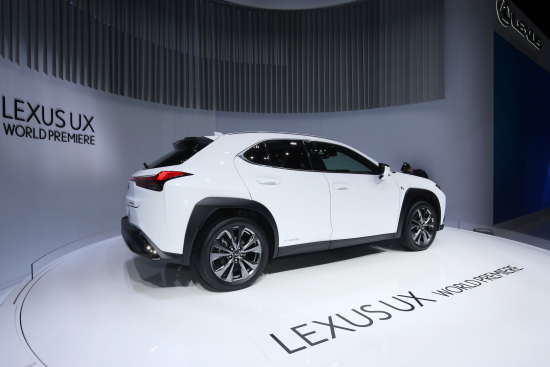 First use of GA-C. The UX is the first Lexus to be constructed using the new global architecture platform GA-C. Its development focused on giving the UX nimble and instant response to the driver’s inputs, while communicating a sense of stability and safety.

The platform allowed for an increase in rigidity, including a high-tensile and ring structure around the rear and back door openings. Highly rigid adhesive and Laser Screw Welding have been used in key locations, greatly enhancing overall rigidity.

The UX has the lowest center of gravity of any vehicle in its class, due to the design of the global architecture-C platform. This characteristic, central to the car’s fine and handling quality, is also supported by weight-saving measures in the body construction, including the use of lightweight aluminium for the side doors, fenders and hood, as well as a resin material for the back door.

MacPherson strut front suspension and a double wishbone arrangement at the rear have been designed and tuned to promote ride comfort and sharp response. Special attention has been paid to shock absorber performance and the quality of the damper oil, oil seals and friction control.

An Electric Power Steering system with a new compact and highly rigid column assist has been adopted for the UX, with a larger diameter column shaft. This supports handling with crisp, immediate response to driver inputs, with good steering feel.

Fourth-generation self-charging hybrid powertrain. The Lexus UX 250h will also use a new fourth-generation hybrid electric system that features a new 2.0-liter four-cylinder gasoline engine and continuously variable transmission (CVT). It will be available both with front-wheel drive and with Lexus’ E-Four.

The new engine is notable for its high thermal efficiency and output, with provisional performance figures for the full hybrid self-charging system (engine and electric motor combined anticipating a maximum 178 DIN hp/131kW).

The powertrain development program focused not just on outstanding fuel economy, but also on a high level of driving appeal. Particular efforts were made to reduce any rubber-band effect in the operation of the hybrid system and transmission by optimizing the level of electric motor assistance and engine rpm to generate a linear acceleration feel without the engine running at high revs.

Engine rpm are synchronized with the increase in vehicle speed to create an immediate and continuous acceleration feel, responding to the driver’s intentions and creating a pleasant driving feel.

The system has a compact and lightweight new transaxle and Power Control Unit, designed to minimize power losses through heat and friction.

A new nickel metal-hydride (NiMH) battery is used with a revised construction and more compact cooling system that allows for smaller dimensions overall. This allows the battery to be located below the rear seat, minimizing intrusion in the load space and supporting the UX's low centre of gravity.

E-Four. The E-Four system gives the UX 250h all-wheel drive capability by placing an additional electric motor on the rear axle. Power distribution between the front and rear axles is automatically optimized when accelerating, cornering, or driving on slippery surfaces. When a loss of rear-wheel grip is detected, the amount of power that can be directed to the rear of the car has been increased from 60 to around 80 per cent, at speeds up to 70km/h (43.5 mph), contributing to excellent handling stability.

Features which enable this across a wide range of driving scenarios include multi-hole direct fuel injectors, a continuously variable capacity oil pump, a variable cooling system and VVT-iE intelligent variable valve-timing on the intake side. The result is a maximum thermal efficiency of around 40%—currently a best-in-class level for a passenger vehicle engine.

Direct Shift-CVT. The new 2.0-liter engine featured in the UX 200 is matched to Lexus’ first Direct Shift-CVT, engineered to provide the smooth, fuel-efficient performance of a conventional continuously variable transmission, but with a direct driving feel.

A conventional system uses two pulleys, connected by a belt, that can change their radius seamlessly, and thus change the effective gear ratio, without any step effect.

The new Direct Shift-CVT has additional gears to achieve acceleration at start-up like a manual transmission. This gives the smooth acceleration of a CVT, but with a direct acceleration feel.

In addition, this use of gears for acceleration from start-up reduces the need for the CVT’s pulleys and belt mechanism to be used in the low gear range. This allows more room to be dedicated to the higher gear range.

High-speed, high-response gear-shifting technology, using a multiplate wet clutch developed for use in automatic transmission, is used to switch power from the gear to the belt and pulleys. This secures performance in response to different situations, from smooth and fuel-efficient driving to sporty performance with fast shifts.

The design also maintains the benefits of a CVT, which can freely adjust the gear ratio to simulate changes like multi-gear automatic transmission under heavy acceleration. This gives linear acceleration feel with synchronisation of the increasing engine revs and vehicle speed.

Safety. The UX is available with the latest version of Lexus Safety System +, including a Pre-Collision System (PCS) developed to be able to recognize pedestrians at night. Additionally, PCS radar detection has been extended to enable detection of cyclists during the day―road users who are involved in a high number of traffic accidents. The package provided on the UX also includes Lexus Co DRIVE (featuring Lane Tracing Assist and Adaptive Cruise Control), Automatic High Beam/Adaptive High-beam System, and Road Sign Assist.

A Parking Support Brake detects the risk of the vehicle coming into contact with a stationary object in its path, or another vehicle approaching from behind, and will automatically reduce drive force, initiate braking and trigger sound and visual warnings to help reduce the likelihood of a collision, or lessen the damage if an impact does occur.

The Aero Stabilizing Blade Lights in the rear incorporate fins with a distinctive design that helps prevent airflow from wrapping around the rear of the vehicle. They make a noticeable contribution to keeping the rear of the car stable when turning and driving in crosswinds.

Precise adjustments were made to the lamps’ curved profile, with each change evaluated and verified in wind tunnel and real-world driving tests.

The wheel arch mouldings have flat sides and a stepped top section, which generates an airflow that helps keep reduce roll and keep the vehicle stable when the car is cornering, changing lanes or being driven in a straight line. Millimeter-precise adjustment of this step feature kept an optimal balance between the stabilising effect and design considerations.

The UX’s aluminium wheels have a world-first aerodynamic design that helps both keep the brakes cool and reduce wind resistance. Computer simulations and wind tunnel testing produced a profile shape for the wheel’s spokes that increased the amount of airflow that could be directed to cool the disc brakes, without compromising the coefficient of drag (Cd).

Toyota is working really hard to continue selling obsolete ICEVs . Wonder why they are so wedded to maintaining the status quo and fighting the inevitable transition to EVs. Even Nissan is making headway selling an low end Electric Versa called a Leaf.