Researchers at Australia’s RMIT University have demonstrated for the first time a working rechargeable “proton battery”. (Earlier post.) The rechargeable battery is environmentally friendly, and has the potential, with further development, to store more energy than currently-available lithium ion batteries.

The working prototype proton battery combines the best aspects of hydrogen fuel cells and battery-based electrical power. In 2014, the RMIT team showed that a proton battery with a metal alloy electrode for storing hydrogen could work, but its reversibility and rechargeability was too low. (Earlier post.) Also the alloy employed contained rare-earth elements, and was thus heavy and costly.

The latest version combines a carbon-based electrode for solid-state storage of hydrogen instead of metal hydride as in the earlier work with a reversible fuel cell to provide an integrated rechargeable unit. The oxygen side of the reversible cell is similar to a PEM URFC (unitized regenerative fuel cell) with titanium felt as the gas diffusion layer (GDL) and a mixed platinum/iridium oxide catalyst. 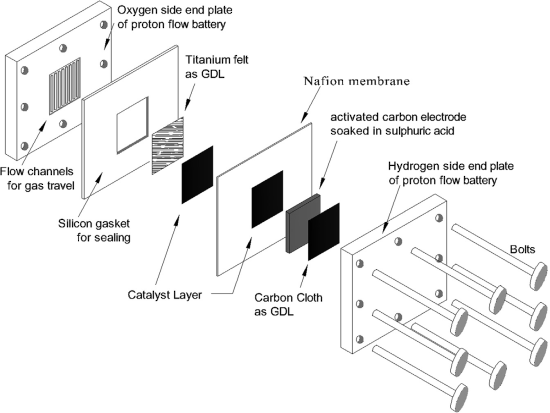 Essentially a proton battery is a reversible PEM fuel cell with an integrated solid-state electrode for storing hydrogen in atomic form, rather than as molecular gaseous hydrogen in an external cylinder. It is thus a hybrid between a hydrogen-fuel-cell and battery-based system, combining advantages of both system types.

The successful use of an electrode made from activated carbon in a proton battery is a significant step forward and is reported in the International Journal of Hydrogen Energy.

During charging, protons produced by water splitting in a reversible fuel cell are conducted through the cell membrane and directly bond with the storage material with the aid of electrons supplied by the applied voltage, without forming hydrogen gas.

In electricity supply mode this process is reversed; hydrogen atoms are released from the storage and lose an electron to become protons once again. These protons then pass back through the cell membrane where they combine with oxygen and electrons from the external circuit to re-form water.

A major potential advantage of the proton battery is much higher energy efficiency than conventional hydrogen systems, making it comparable to lithium-ion batteries. The losses associated with hydrogen gas evolution and splitting back into protons are eliminated.

The latest experimental results showed that a porous activated-carbon electrode made from phenolic resin was able to store around 1 wt% hydrogen in the electrode. This is an energy per unit mass already comparable with commercially-available lithium ion batteries, even though the proton battery is far from being optimized. The maximum cell voltage was 1.2 volt.

Potential applications for the proton battery include household storage of electricity from solar photovoltaic panels. With some modifications and scaling up, proton battery technology may also be used for medium-scale storage on electricity grids as well as powering electric vehicles.

Future work will now focus on further improving performance and energy density through use of atomically-thin layered carbon-based materials such as graphene, with the target of a proton battery that is truly competitive with lithium ion batteries firmly in sight.

RMIT’s research on the proton battery has been partly funded by the Australian Defence Science and Technology Group and the US Office of Naval Research Global.

Nothing on energy/mass, power/mass or reversible efficiency, but this seems to be early results.  Let's see how it washes out.