In February, another fleet of BYD Alexaner Dennis battery-electric buses took over operation of a fourth London bus route. Route 153, operated by Go-Ahead London on behalf of Transport for London (TfL), runs an intensive service from before 05.00 to after 23.00 six days a week (with a slightly later start on Sundays).

The Route spans many of the City of London’s most congested streets between its termini at Finsbury Park in the north to Moorgate in the heart of the financial district. 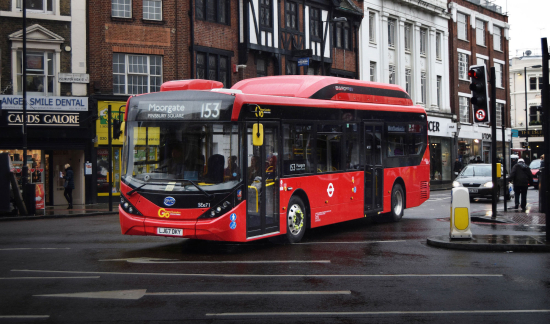 The new fleet consists of 11 of the 10.8m BYD ADL Enviro200EV single deckers, similar to others operated by Go-Ahead and now a familiar sight on London roads. The well-proven zero emission vehicles entered service successfully and operate from the Northumberland Park Garage in Tottenham, north London. The new buses marked the transfer of the route to Go-Ahead from CT Plus. BYD has supplied the depot with its own-designed and manufactured charging points.

The other three ADL BYD serviced London routes, all with Go-Ahead, are the 521 and 507 from Waterloo and the 360 from Camberwell. Other routes and operators will receive fleets of BYD ADL electric buses in the coming months following tender wins by the partnership.

The smooth switch on of our electric buses to operate another intensive London route is a testament to the strength of our overall offering—not just the proven and reliable buses themselves but of the back up and support of our partners in planning and installing the necessary equipment to make electric bus operation successful from day one.

BYD and ADL announced their alliance in 2015 with the confirmation of a £19-million (US$26.4-million) deal for the introduction of London’s first large-scale, zero-emission, single deck bus fleet—also the single largest fleet of full size electric buses in Europe.

The vehicles are built on BYD chassis and powered by BYD’s technology-leading electric drivetrain, and bodied by ADL.