In collaboration with Linköping-based energy recovery specialists Tekniska verken, Scania Engines is currently testing one of its engines using raw gas, biogas that is untreated—i.e., not cleaned or upgraded to remove wastewater, CO2 and other particles, as happens with the production of compressed natural gas for vehicle fuels. Instead, the raw gas is taken directly from the digestion chambers as fuel for the Scania engine, to see how it performs over 600 hours of tests. 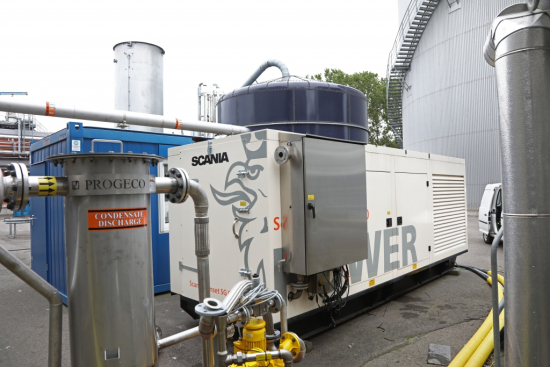 Scania’s hope is that if the engine can work with this raw gas, it will be an even quicker and cheaper process of producing biogas for power generation, and another valuable source of alternative energy from recycled material.

We have been working with Tekniska verken for the past two years, initially with compressed natural gas, and we started testing raw gas in early 2017. In September 2017 we carried out the latest round of testing and have been reviewing the results during the following months.

Tekniska verken produces compressed natural gas (CNG) to be used as vehicle fuel. Indeed, the city of Linköping, which owns the company, runs its bus system exclusively on CNG. But while Tekniska verken’s focus is not necessarily on raw gas, Erik Nordell, the Development Engineer at Tekniska verken who has been coordinating the work with Mattsson and his Scania team, says Tekniska will be taking a close interest in the results of the tests.

Scania is also set to work with Telge Återvinning in Tveta, Södertälje, a waste-recycling entity owned by Södertälje council. At Scania’s instigation, the pair run tests to see how Scania’s engines can run on simple gas—in other words, gas that is extracted directly from landfill sites.

This will mean taking the gas directly from source—without refining or upgrading—by drilling holes directly into Telge’s landfilled waste. Even though Tveta stopped taking landfill in the 1990s, the biogas by-product from the organic waste digestion process continues to be available for up to 30 years after burial.

There are landfill sites all over the world, and if we can effectively use the lower-quality gas that comes directly from these sources, there is huge potential for the market and for consumers.

This is particularly interesting because of the silane content of LFG.  Silane burns to silicon dioxide, which isn't something you want inside your engine.  I hope Scania publishes their results, and GCC writes it up.

The only clue here is that this particular site stopped taking landfill in the 1990's.

Two scrubbing techniques mentioned in the following PDF.
Laboratory analyses is required for detection and quantifying .

Siloxanes can now be found in every landfill and digester in
North America and Europe. Thirty years ago this would not
have been the case. Newer landfills are tending to show
higher concentrations of siloxanes, reflecting their expanding
use in more and more domestic products. The siloxane
problem can only worsen. Still, many older sites with lower
siloxane levels can be tolerably managed with creative
maintenance schemes and modified operating practices, but
even these solutions come at a cost – for instance, one trick
to cope with siloxanes is to reduce capacity. Xebec estimates
that approximately one third of all landfills using internal
combustion equipment to generate electricity from gas
would have very good economic reasons to consider
investing in a dedicated siloxane removal system. A

Siloxanes are non‐toxic silicon‐bearing organic compounds
that are added to many domestic products such as
deodorants to improve their texture and feel.
Siloxanes are volatile compounds that evaporate and migrate
out with the landfill and digester gases to be combusted
either harmlessly in a flare, or harmfully inside internal
combustion equipment. When methane and other
hydrocarbons burn, all the combustion products are gases
that exhaust easily from the system. Silicon‐bearing organic
compounds burn as well, but the combustion product of the
silicon part is very fine crystalline silica, which is a solid. Silica
in its granular form is better known as sand. The crystalline
silica from burning siloxanes sticks to hot surfaces inside
internal combustion equipment, coating them with a thick,
hard, abrasive layer that also insulates these interior
surfaces, allowing heat to build up where it should not. If the
concentration of siloxanes in the landfill and digester gas is
high enough, this accumulation of silica deposits can severely
affect the maintenance intervals of the internal combustion
equipment. There will be much more downtime and many
more parts to replace —operators can be faced with full head
and turbocharger change outs, or engine rebuilds after only
9000 hours of running time instead of 25,000; spark plugs
and oil changes may last as little as 400 hours

I'm surprised that refrigeration removed such a small fraction of siloxanes.  (Another study in thermodynamics, if I have time for one.)  I was curious about how they decomposed and into what under different conditions, but didn't find much.  Maybe removing siloxanes from bio-gases is another productive avenue for study and development.  If they can be decomposed into silicon dioxide pre-combustion, they could be a reductant for something else and actually function as fuel.