The Volkswagen Group Board of Management has decided that the Group's two major power stations in Wolfsburg are to be changed over from hard coal to natural gas firing. In the course of this project, several new combined-cycle systems are to be installed as replacements for the existing coal-fired boilers. About €400 million (US$492 million) is to be invested in this project and the new facilities are to be commissioned between 2021 and 2022.

The new high-efficiency gas turbines to be installed at the Wolfsburg power stations will durably reduce carbon dioxide emissions for heat and power generation by about 1.5 million tonnes per year. This corresponds to the current annual CO2 output of about 870,000 vehicles and represents a reduction of almost 60% compared with the previous emissions of the power stations at Wolfsburg.

With reference to the German plants, the reduction in CO2 emissions amounts to about 50%. The systems are to be operated by Group company VW Kraftwerk GmbH.

At the Heizkraftwerk Nord/Süd power station—a landmark of the Wolfsburg plant—Volkswagen plans to replace the coal-fired boilers by a combined-cycle (gas and steam turbine) system and three hot water boilers. In the future, these facilities will generate about 136 megawatts of electric power and about 386 megawatts of heat energy. 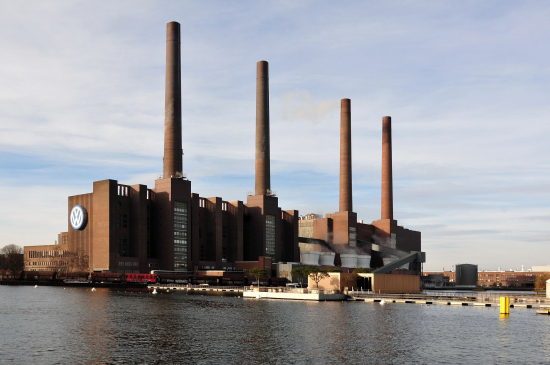 In addition, two further combined-cycle units are to be installed in the current coal storage area next to the Heizkraftwerk West power station and will then generate about 288 megawatts of electric power and about 265 megawatts of heat energy.

Provided that approval is given by the competent authorities and sufficient progress is achieved with detailed design and calls for tenders, the first construction work could already start in 2018.

The new facilities will not only reduce carbon dioxide emissions but will also drastically lower water consumption, waste volumes and other emissions – by an average of about 50 percent. This way, we also help to reduce local pollutant concentrations.

—Stephan Krinke, Head of Environmental Affairs of the Volkswagen Group

The two power stations at Wolfsburg not only supply most of the power required for the Volkswagen Passenger Cars, Volkswagen Commercial Vehicles and Volkswagen components facilities at Wolfsburg, Emden, Hanover, Kassel, Brunswick and Salzgitter. The stations also supply heat to the Wolfsburg plant as well as to the city of Wolfsburg.