MIT and a new private company, Commonwealth Fusion Systems (CFS), are partnering on a novel approach to fusion power. CFS, which has attracted an investment of $50 million in support of this effort from the Italian energy company Eni, will join with MIT to carry out rapid, staged research leading to a new generation of fusion experiments and power plants based on advances in high-temperature superconductors—enabled by decades of federal government funding for basic research.

CFS, which will continue to seek the support of additional investors, will fund fusion research at MIT as part of this collaboration, with an ultimate goal of rapidly commercializing fusion energy and establishing a new industry.

This is an important historical moment: Advances in superconducting magnets have put fusion energy potentially within reach, offering the prospect of a safe, carbon-free energy future. As humanity confronts the rising risks of climate disruption, I am thrilled that MIT is joining with industrial allies, both longstanding and new, to run full-speed toward this transformative vision for our shared future on Earth.

Everyone agrees on the eventual impact and the commercial potential of fusion power, but then the question is: How do you get there?. We get there by leveraging the science that’s already developed, collaborating with the right partners, and tackling the problems step by step.

Superconducting magnets are key. Fusion, the process that powers the sun and stars, involves light elements, such as hydrogen, smashing together to form heavier elements, such as helium—releasing prodigious amounts of energy in the process. This process produces net energy only at extreme temperatures of hundreds of millions of degrees Celsius, too hot for any solid material to withstand. To get around that, fusion researchers use magnetic fields to hold the hot plasma in place, keeping it from coming into contact with any part of the donut-shaped chamber.

The new effort aims to build a compact device capable of generating 100 MW of fusion power. This device will, if all goes according to plan, demonstrate key technical milestones needed to ultimately achieve a full-scale prototype of a fusion power plant that could set the world on a path to low-carbon energy. If widely disseminated, such fusion power plants could meet a substantial fraction of the world’s growing energy needs while drastically curbing the greenhouse gas emissions that are causing global climate change.

Thanks to this agreement, Eni takes a significant step forward toward the development of alternative energy sources with an ever-lower environmental impact. Fusion is the true energy source of the future, as it is completely sustainable, does not release emissions or long-term waste, and is potentially inexhaustible. It is a goal that we are increasingly determined to reach quickly.

CFS will support more than $30 million of MIT research over the next three years through investments by Eni and others. This work will aim to develop the world’s most powerful large-bore superconducting electromagnets—the key component that will enable construction of a much more compact version of a fusion device called a tokamak. The magnets, based on a superconducting material that has only recently become available commercially, will produce a magnetic field four times as strong as that employed in any existing fusion experiment, enabling a more than tenfold increase in the power produced by a tokamak of a given size.

Conceived at MIT Plasma Science and Fusion Center. The project was conceived by researchers from MIT’s Plasma Science and Fusion Center (PSFC), led by PSFC Director Dennis Whyte, Deputy Director Martin Greenwald, and a team that grew to include representatives from across MIT, involving disciplines from engineering to physics to architecture to economics.

SPARC. Once the superconducting electromagnets are developed by researchers at MIT and CFS—expected to occur within three years—MIT and CFS will design and build a compact and powerful fusion experiment, called SPARC, using those magnets. The experiment will be used for what is expected to be a final round of research enabling design of the world’s first commercial power-producing fusion plants. 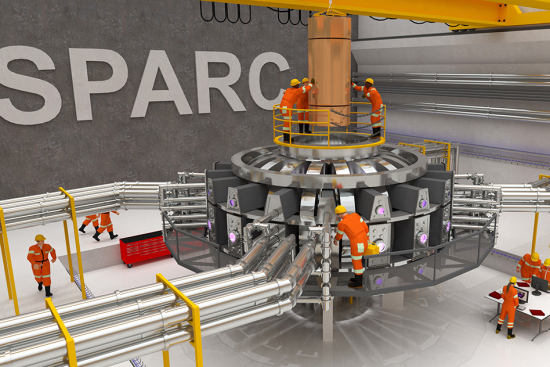 SPARC is designed to produce about 100 MW of heat. While it will not turn that heat into electricity, it will produce, in pulses of about 10 seconds, as much power as is used by a small city. That output would be more than twice the power used to heat the plasma, achieving the ultimate technical milestone: positive net energy from fusion.

This demonstration would establish that a new power plant of about twice SPARC’s diameter, capable of producing commercially viable net power output, could go ahead toward final design and construction. Such a plant would become the world’s first true fusion power plant, with a capacity of 200 MW of electricity, comparable to that of most modern commercial electric power plants. At that point, its implementation could proceed rapidly and with little risk, and such power plants could be demonstrated within 15 years, say Whyte, Greenwald, and Hartwig.

SPARC is an evolution of a tokamak design that has been studied and refined for decades. This included work at MIT that began in the 1970s, led by professors Bruno Coppi and Ron Parker, who developed the kind of high-magnetic-field fusion experiments that have been operated at MIT ever since, setting numerous fusion records.

Our strategy is to use conservative physics, based on decades of work at MIT and elsewhere. If SPARC does achieve its expected performance, my sense is that’s sort of a Kitty Hawk moment for fusion, by robustly demonstrating net power, in a device that scales to a real power plant.

Complementary to ITER. The project is expected to complement the research planned for a large international collaboration called ITER, currently under construction as the world’s largest fusion experiment at a site in southern France. If successful, ITER is expected to begin producing fusion energy around 2035.

Fusion is way too important for only one track.

By using magnets made from the newly available superconducting material—a steel tape coated with a compound called yttrium-barium-copper oxide (YBCO)—SPARC is designed to produce a fusion power output about a fifth that of ITER, but in a device that is only about 1/65 the volume, Hartwig says.

The ultimate benefit of the YBCO tape, he adds, is that it drastically reduces the cost, timeline, and organizational complexity required to build net fusion energy devices, enabling new players and new approaches to fusion energy at university and private company scale.

The way these high-field magnets slash the size of plants needed to achieve a given level of power has repercussions that reverberate through every aspect of the design. Components that would otherwise be so large that they would have to be manufactured on-site could instead be factory-built and trucked in; ancillary systems for cooling and other functions would all be scaled back proportionately; and the total cost and time for design and construction would be drastically reduced.

What you’re looking for is power production technologies that are going to play nicely within the mix that’s going to be integrated on the grid in 10 to 20 years. The grid right now is moving away from these two- or three-gigawatt monolithic coal or fission power plants. The range of a large fraction of power production facilities in the U.S. is now is in the 100 to 500 megawatt range. Your technology has to be amenable with what sells to compete robustly in a brutal marketplace.

Because the magnets are the key technology for the new fusion reactor, and because their development carries the greatest uncertainties, Whyte explains, work on the magnets will be the initial three-year phase of the project, building upon the strong foundation of federally funded research conducted at MIT and elsewhere.

Once the magnet technology is proven, the next step of designing the SPARC tokamak is based on a relatively straightforward evolution from existing tokamak experiments, he says.

By putting the magnet development up front, we think that this gives you a really solid answer in three years, and gives you a great amount of confidence moving forward that you’re giving yourself the best possible chance of answering the key question, which is: Can you make net energy from a magnetically confined plasma?

—Dennis Whyte, the Hitachi America Professor of Engineering and head of MIT’s Department of Nuclear Science and Engineering

The research project aims to leverage the scientific knowledge and expertise built up over decades of government-funded research—including MIT’s work, from 1971 to 2016, with its Alcator C-Mod experiment, as well as its predecessors—in combination with the intensity of a well-funded startup company. Whyte, Greenwald, and Hartwig say that this approach could greatly shorten the time to bring fusion technology to the marketplace while there’s still time for fusion to make a real difference in climate change.

CFS MITEI participation. Commonwealth Fusion Systems is a private company and will join the MIT Energy Initiative (MITEI) as part of a new university-industry partnership built to carry out this plan. The collaboration between MITEI and CFS is expected to bolster MIT research and teaching on the science of fusion, while at the same time building a strong industrial partner that ultimately could be positioned to bring fusion power to real-world use.

Energy startups often require significant research funding to further their technology to the point where new clean energy solutions can be brought to market. Traditional forms of early-stage funding are often incompatible with the long lead times and capital intensity that are well-known to energy investors.

Because of the nature of the conditions required to produce fusion reactions, you have to start at scale. That’s why this kind of academic-industry collaboration was essential to enable the technology to move forward quickly. This is not like three engineers building a new app in a garage.

In addition to its support of CFS, Eni has also announced an agreement with MITEI to fund fusion research projects run out of PSFC’s Laboratory for Innovation in Fusion Technologies. The expected investment in these research projects amounts to about $2 million in the coming years.