The Spanish postal service Correos is testing three-wheeled E-Cargo Bikes by Bikelecing with 48V Continental system for use in narrow or hard to access pedestrian zones, city centers or areas of limited access for motorized vehicles. 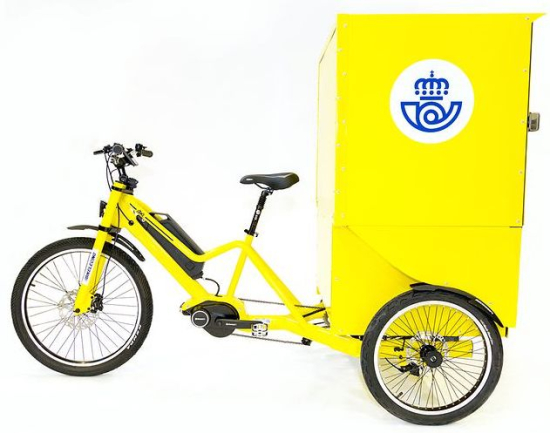 The bike features a 250-watt centrally-mounted motor and can carry around 550 liters (19.4 ft3) of packages over a distance of up to 60 kilometers (37 miles), because the integrated torque sensor ensures particularly efficient battery use.

With the cargo bike weighing a total of 38 kg, this means that delivery agents are comparatively light when on the go.

Correos is initially using the three-wheeled bikes in five Spanish cities for some three months from January 2018. Sample models are being used in Madrid, Seville, Málaga, Cordoba and Granada to test them for reliability and everyday suitability. Correos thinks that expansion to other regions and vehicles is a realistic option.

Since 2008, the company has been relying increasingly on electric vehicles with regard to its environmental policy in order to reduce CO2 emissions. The E-cargo bikes by BKL with Continental’s 48V eBike system are another stage in this development. The first pilot bike with electric drive was used in Seville back in April 2017.