Volkswagen has developed and deployed a gasoline engine that offers diesel-like fuel economy but is significantly cheaper to buy. Currently applied in the new Golf and Golf Variant (earlier post), the 1.5 TSI ACT BlueMotion delivers 96 kW / 130 PS with combined fuel consumption of 4.8 l/100 km (49 mpg US). The NEDC extra-urban figure drops as low as 4.0 l/100 km/h (59 mpg US).

The 1.5-liter engine (earlier post) is 10% more efficient than comparable gasoline engines; Volkswagen achieves this through the new TSI Miller combustion process and the use of a high-tech turbocharger with variable turbine geometry (VTG). 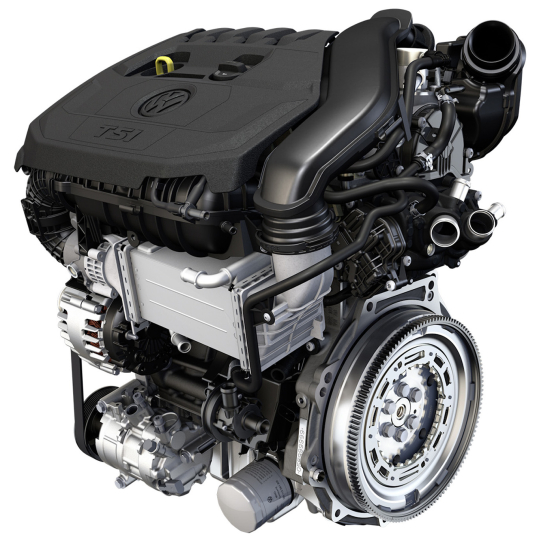 Efficient TSI Miller cycle. The TSI Miller cycle combustion process entails the use of optimized valvetrain control (early intake valve closure) combined with higher compression and turbocharging. It innovatively controls combustion of the fuel and air mixture, which leads to the improvement in efficiency of up to 10%. This enables further reduced fuel consumption and emission levels plus powerful torque even at low engine speeds.

Compared with other gasoline engines, the intake valves of the 1.5 TSI ACT BlueMotion are open for a shorter time; the intake valves are closed during the intake stroke at a time when the piston still has a little way to travel and is moving further downward. This leads to a reduction in throttling losses under partial load.

Meanwhile, the mixture also benefits from increased expansion in the knock-limited range. This expansion reduces pressure and temperature within the mixture. The ignition timing thus can be retarded for the sake of better efficiency while reducing the risk of uncontrolled combustion processes. It now becomes possible to increase in the compression ratio to 12.5:1, with an accompanying increase in efficiency.

Chargers of this kind combined with gasoline engines are usually found only in high-performance cars. Volkswagen now becomes the first manufacturer to use a VTG charger in a mainstream gasoline engine car. By way of comparison: a conventional turbo system diverts part of the exhaust gas stream needed for the forced induction away from the turbine via a wastegate valve as a function of its operating state. Energy is lost in this process.

In the 1.5 TSI ACT BlueMotion, however, it is possible to route 100% of the exhaust gas stream via the turbine at any time by means of VTG. By doing this, the combustion chamber is always optimally supplied at high turbocharger efficiency levels. Fuel consumption and emission levels go down, and responsiveness improves.

The four-cylinder engine is particularly conservative in its use of fuel whenever the Golf is being driven with good anticipation and within the partial load range. Then the new engine either deactivates some cylinders (Active Cylinder Management - ACT) or completely shuts itself off (eco-coasting micro-hybrid mode).

Interesting to see how petrol engines are catching up with diesel once the car companies put some effort into it.
Note that it is designed to be hybridised from mild, full to plug-in so we can foresee many years from this engine.
(I think the main nail in the diesel coffin was that they are looking like they will be banned from many city centers in Europe, and no one wants that.

Unfortunately this engine is not available in North America at least through the 2019 model year and there is no announced date for introduction. The 2019 Jetta soldiers on with the older 1.4L TSI EA211.

What's the thermal efficiency? They say 10% better than comparable engines, but how does it compare to, say, the Toyota A20A-FXS?

I'm impressed by the power; 96 kW is just 4 kW less than my old 2.0 TDI.  However, it's probably delivered at a rather whiny high RPM.  The thing that was great about the TDI is that you could get massive torque at low engine RPM and it was very nice and quiet while doing it.  If this little 1.5 can do the same, I'll be all in for it.

The 49 MPG looks impressive but it really depends on the driving cycle.  The EPA cycle might not play to its strong points.

I would think this 1.5 TSI is in the same ballpark.

After watching the comments on this topic it appears to me that you actually believe that a gasoline engine could have diesel-like efficiency. Why would you believe VW now? This is marketing; not the truth. The truth is that the diesel engine has the highest efficiency of all known heat engines. Note that there are several diesel cars of this size with NEDC fuel consumption in the range of 3.2-3.5 l/100 km. My own Ford Focus is rated at 3,4 l/100 km. Another example is the previous version of the 1.6-liter Peugeot 308 diesel that had FC at 3,2 l/100 km in NEDC. This is 33% less than the 1.5-liter gasoline VW Golf. Relative MPG (preferred basis for comparison in the USA) is 50 % better for the Peugeot diesel. CO2 is more than 20 % lower. Note that the yearly efficiency improvement of the engine is in the order of 0.5% per year, which implies that it would take VW 40 years (!) to catch up, if we presume that diesel engines would not improve at all in the future. If diesels will continue to improve (why not?), we could also note that is not easy to aim at a moving target.

The Miller cycle VW 1.5 as 130 hp and 200 Nm of torque. Note that Miller system, and Atkinson cycle in general, reduces power density and requires some “anti-downsizing”. The new version of the Peugeot 308 engine is reduced in size to 1.5 liter and it also has 130 hp but, at 300 Nm of torque, it has 100 Nm more (!) torque. Regarding performance, I would say that this would be an apples-to-apples comparison. The fuel consumption for the new diesel Peugeot 308 in WLTP is 3.5 l/100 km. By the same standard, the gasoline VW Golf would, most likely, be rated over 5 l/100 km.

The new WLTP test cycle (WLTC) gives more realistic fuel consumption than NEDC. We do not know what the fuel consumption for the new Peugeot 308 would be in NEDC but according to Peugeot, fuel consumption has been improved for the new engine (downsized from 1.6 to 1.5 liter). Until now, VW has refused to certify any car but one version of the VW Up! according to WLTP. WTLP was introduced as an option to NEDC in Euro 6c by September 1, 2017 for new engine families and by September 1, 2018, all models have to be certified according to this norm. The homologation department at VW will have a busy period until September 1. Peugeot has gone one step further by certifying according to Euro 6d-TEMP, which applies for all cars by September 1, 2019 and where WLTP is mandatory. Cars certified in Euro 6d-TEMP also has to meet limits for on-board emissions (RDE), something that VW also seems to avoid as long as they can .