Toyota unveiled a prototype hybrid flexible-fuel vehicle (Hybrid FFV) during an event Toyota held São Paulo, Brazil. Stakeholders including the state government, universities, and the sugarcane association (the Sugarcane Industry Union: UNICA) attended the event. The prototype is the combination of a flexible-fuel vehicle (FFV) that can be powered by both gasoline and alternative fuels such as ethanol, and Toyota’s hybrid system.

The Hybrid FFV is a new powertrain system that Toyota is developing with an aim to popularize hybrid electric vehicles in Brazil and to contribute to the environment through reduction of CO2 emissions. The prototype uses the Toyota Prius—which is currently sold and becoming popular in Brazil—as a base model. 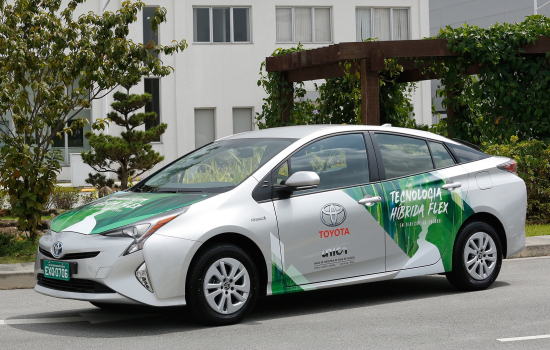 Toyota’s initial studies suggest that a Hybrid FFV has an advantage in environmental performance compared to a standard FFV on a well-to-wheels basis. If the Hybrid FFV is fueled only by sugarcane-based ethanol (E100 fuel), the results are even better.

Toyota will collect various data through real-world road testing in Brazil going forward and evaluate the Hybrid FFV system’s reliability, durability, and powertrain performance, with an eye toward commercialization.

Good, this one of the better moves Toyota has made..... a hybrid not tied to the fossil fuel industry. Needs to be a PHEV however with a decent battery range.