Air quality in major cities is a critical issue, especially with regard to road traffic and residents’ health. However, emissions do not just remain in conurbations; particles and gaseous pollutants can be transported thousands of kilometers by the wind. This scenario is particularly relevant in Asia, home to the world’s largest concentration of megacities.

From 10 March to 9 April 2018, the German Aerospace Centre (Deutsches Zentrum für Luft- und Raumfahrt; DLR) is conducting research flights from Tainan in Taiwan more closely to examine the spread and transformation of emissions from major cities such as Manila, Taipei, Seoul, Tokyo, Beijing, Shanghai and Guangzhou. 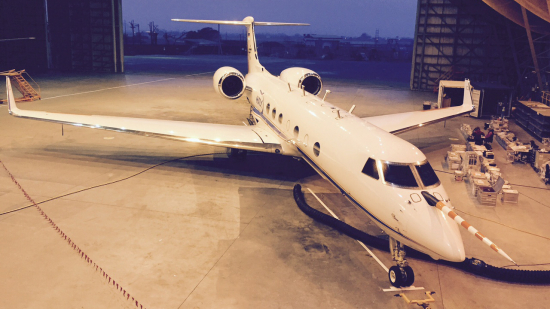 The University of Bremen is the scientific base of the international project known as EMeRGe (Effect of Megacities on the transport and transformation of pollutants on the Regional and Global scales). The aim is to better understand and predict the extent and impact of urban air pollution on Earth’s atmosphere. Previously, the researchers studied European conurbations from the air.

The transport and transformation of plumes from selected European and Asian major population centers (MPCs) will now be investigated with special focus on the rate of formation of ozone and aerosols. In EMeRGe the composition of the plumes of pollution entering and leaving Europe and leaving Asia will be measured by performing optimized transects and vertical profiling.

This strategy enables the outflow from a variety of MPCs, having different characteristics, to be studied in quasi-Lagrangian approach and therefore to identify differences and commonalities in the transport, and transformation of the outflow from European and Asian MPCs.

A total of approximately 100 flight hours are planned for the measurement flights in the emission plumes of Asian cities, said John P. Burrows, the Principal Investigator of the mission and a professor at the Institute of Environmental Physics at the University of Bremen.

The High Altitude and Long Range Research Aircraft (HALO) is equipped with a total of 20 measurement instruments to record the various gas and particle emissions of major cities and the related reaction products. 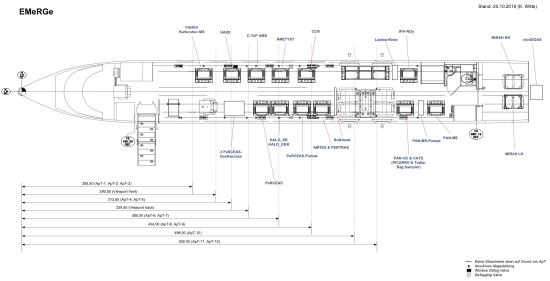 We want to gain a detailed understanding of how emissions in the atmosphere spread and transform in different weather conditions. In Asia, in particular, high temperatures, humidity, solar radiation and the frequency of storms play a major role. When it comes to the spread of emissions, for example, we are interested in how much ozone is produced from the precursor nitrogen oxides and hydrocarbons, as well as the extent of new particle formation from gaseous precursors, such as sulfur dioxide and organic compounds.

—Hans Schlager from the DLR Institute of Atmospheric Physics

The specially equipped HALO takes off from Tainan Airport in Taiwan to conduct measurement flights over the various Asian cities and conurbations.

To ensure that the researchers obtain an accurate picture of the distribution of urban emissions, HALO first flies in atmospheric layers close to the ground, before gradually climbing to higher altitudes. In Asia, some careful, long-term planning is required for the research flights because they involve air traffic control centers in many different countries, and the traffic density around the megacities is extremely high.

Since clear skies are required for the measurement flights in order to fly at low altitudes into the urban emission plumes, they are now operated in spring in relatively favorable weather conditions.

When taking the measurements, flight paths are sometimes less than one kilometer above the ground, for example, during the first local measurement flight on 17 March 2018 over the East China Sea, when emissions were recorded from megacities, such as Shanghai.

We are conducting low-level visual flights and can only fly in cloudless areas.

During the first part of the project in summer 2017, the researchers on board HALO already examined the environment over European cities and conurbations such as London, Rome, Paris, Marseilles, Barcelona and the Ruhr region, as well as the Po Valley.

EMeRGe comprises more than 50 partners from 17 different countries, including 27 partner institutions from Asia.

These partners will carry out additional measurements using other aircraft platforms and ground-based networks, in parallel to the HALO flights,” Burrows says. “For example, unmanned light aircraft are being used by the Research Center for Environmental Changes at Academia Sinica in Taipei, our partner institution in Taiwan. Ground measurements are being taken in China, Taiwan, South Korea, Japan, the Philippines and Thailand, for example. Special thanks go to our hosts, the researchers at Academia Sinica in Taiwan, including its director, Pao-Kuan Wang, and deputy director, Charles C.K. Chou, as well as the National Taiwan University, especially Po-Hsiung Lin.

In total, approximately 10 HALO measurement flights over Asia are planned within the next four weeks. DLR will provide information about the location of the flights conducted via its social media channels.

In addition to the University of Bremen, project partners in Germany are the Max Planck Institute for Chemistry, the universities of Mainz, Heidelberg and Wuppertal, as well as the Karlsruhe Institute of Technology (KIT) and Forschungszentrum Jülich. The EMeRGe project receives around €6 million (US$7.4 million) worth of funding from the German Research Foundation (Deutsche Forschungsgemeinschaft, DFG), the Max Planck Society (MPG) and DLR.

The HALO research aircraft is a joint initiative of German environmental and climate research institutions. HALO was procured with funds from the German Federal Ministry of Education and Research (BMBF), the Helmholtz Association and the Max Planck Society. HALO is operated by the German Research Foundation, the Max Planck Society (MPG), Jülich Research Center (FZJ), Karlsruhe Institute of Technology (KIT), the German Research Centre for Geosciences (Deutsches GeoForschungsZentrum; GFZ) in Potsdam and the Leibniz Institute of Tropospheric Research in Leipzig (TROPOS). DLR both owns and operates the aircraft.

Every large commercial Jet could be equipped to measure (some of) the air pollution over large cities (on every approach to adjacent airport).

The reduce total weight of measuring equipment, each aircraft could be assigned a different specific type of pollution. Total pollution could be calculated/measured at environmental labs.