At the New York International Auto Show, Nissan revealed the 2019 Altima. The sixth-generation of the best-selling mid-size sedan features two new powerplants, including the advanced variable compression unit first introduced in the Infinit QX50 (earlier post); the first available Intelligent All-Wheel Drive in a Nissan sedan in the US; and advanced Nissan Intelligent Mobility features, including ProPILOT Assist. The 2019 Altima goes on sale in the US in the fall, followed by other global markets at later dates. 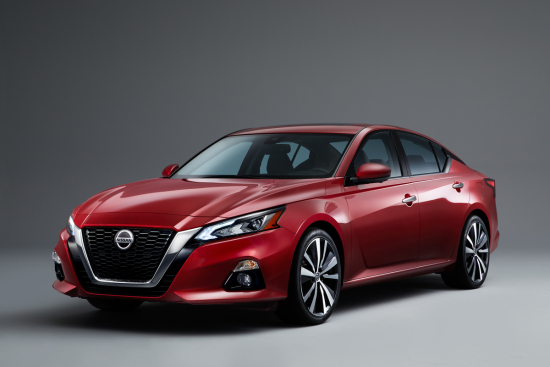 Designated as the VC-Turbo, the new technology continuously transforms the engine characteristics, providing both dynamic and efficient performance.

The VC-Turbo engine offers any compression ratio between 8:1 (for high performance, left in red) and 14:1 (for high efficiency, right in blue). As a result, the engine capacity varies between 1,997 cc and 1,970 cc.

As the angle of the multi-link arm rotates, the top-dead-center position of the pistons—and the compression ratio—changes.


The VC-Turbo engine utilizes both multi-point injection and direct injection to balance efficiency and power in all conditions. The Direct Injection Gasoline (DIG) system improves combustion efficiency and performance, and enables the engine to avoid knocking at higher compression ratios, while the multi-point injection mixes fuel and air earlier, enabling complete combustion in the chamber for greater efficiency at low engine loads. The engine also contributes to lower NVH and improved emissions (versus the previous 3.5-liter V6). The VC-Turbo engine is assembled in Japan.

Altimas equipped with the VC-Turbo (SR VC-Turbo and Platinum VC-Turbo grades) include a meter in the standard 7.0-inch Advanced Drive Assist Display so the driver can see, as well as feel, the control state of this world-first technology while driving.

In terms of fuel economy, the new 2.0-liter VC-Turbo engine is projected to have a double-digit percentage increase in highway mpg for the front-wheel drive models.

With the VC-Turbo, the driver balances the engine character through acceleration pedal operation alone. This two engines in one is another way Altima stands far apart from all other vehicles in the segment.

New standard 2.5-liter 4-cylinder engine. Reflecting the Altima’s importance to the Nissan brand, the company is also making its biggest investment ever in a new model powertrain development—introducing for the first time two completely new engines for one model change.

More than just the gains in horsepower and torque, the new engine offers improvements in noise, vibration and harshness, along with enhanced fuel economy and cleaner emissions. It also has a lower profile through adoption of a “reverse” cylinder head with integrated exhaust manifold and low engine mounting into the new platform’s engine bay for quieter operation.

All 2019 Altima models, including both engine configurations, come equipped with a standard Xtronic transmission. For 2019, the Xtronic transmission receives an expanded lock-up area for improved efficiency. Paddle shifters are available with the Altima SR grade.

Altima AWD. In response to the desires of buyers in key northern U.S. market regions, Intelligent All-Wheel Drive will be offered for the first time on the Altima. The new AWD models are projected to account for a significant share of Altima US sales in these regions.

The AWD system is available in all trim levels equipped with the 2.5-liter 4-cylinder engine. The system uses an advanced torque split control strategy that automatically redistributes torque to the wheels (0:100 front up to 50:50 front-to-rear) according to road and driving conditions.

In addition, cooperative control between the AWD torque distribution, brake limited slip differential and Hill Start Assist optimizes performance on hills starts and rough roads—adding to the sense of confidence and driving pleasure under a range of driving scenarios.

Three wheel and tire size combinations are available: 16-inch, 17-inch and, for the first time, 19-inch. The Altima SR grade, as in the previous generation Altima, features unique suspension and chassis tuning for a sportier ride and handling.

ProPILOT Assist is the foundation for the autonomous vehicles of the future, helping drivers stay centered in the lane, navigate stop-and-go traffic, maintain a set vehicle speed and maintain a set distance to the vehicle ahead. To activate the system, the driver simply pushes the blue ProPILOT Assist ON button, then sets the Intelligent Cruise Control when the desired speed is reached, as with a normal advanced cruise control system.

ProPILOT Assist is standard on the 2019 Altima SV, SL and Platinum grades.

Along with ProPILOT Assist, also new for 2019 is Rear Automatic Braking (RR-AB), which helps the driver detect stationary objects when backing up, and if necessary applies the brakes to help avoid a collision. When an object is detected while driving the vehicle in reverse at low speed, the system warns the driver with visual and audible warnings.

If the driver’s braking is not sufficient and there is still a risk of a collision, the system issues second visual and audible warnings and applies harder braking immediately before the potential collision. The new Rear Automatic Braking system is standard on Altima SV, SL and Platinum grades.

A new Traffic Sign Recognition system provides Altima drivers with the most recent speed limit information detected by a camera unit located on the windshield in front of the inside rearview mirror. The information from detected signs is displayed in the Advanced Drive Assist Display. In vehicles equipped with navigation, the speed limit display is based on a combination of navigation system data and camera recognition. 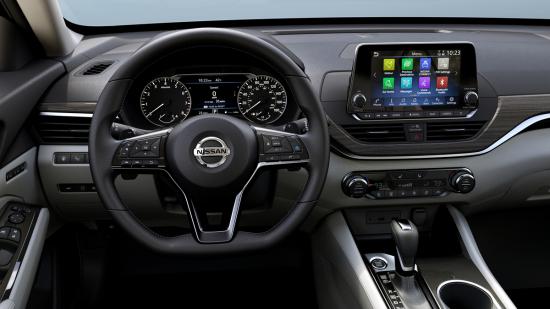 The all-new Altima’s design was inspired by the award-winning Nissan Vmotion 2.0 concept. The new Altima is lower, longer and wider than the previous generation with a highly balanced, aggressive stance that includes available 19-inch wheels and tires. Inside, the all-new premium interior features a wide gliding wing instrument panel, which accentuates the exterior's low cowl and hood, helping create an open, airy environment.

I would live this one alone; don't know why you need all this risky complicated mechanical stuff when designing in an electric motor and battery instead would work so well and is proven. This could be another Nissan failure like the CVT.