For the first time, Lawrence Livermore National Laboratory (LLNL) has published state-by-state energy and water Sankey diagrams in one location so that analysts and policymakers can find all the information they need in one place. These diagrams depict energy use and water flow during the year 2010, the latest year for which comprehensive data is available.

LLNL worked with the US Department of Energy (DOE) and the National Energy Technology Laboratory (NETL) to produce the atlas of hybrid energy/water Sankey diagrams for each of the states, such as the California estimated energy and water flow chart for 2010 (below). 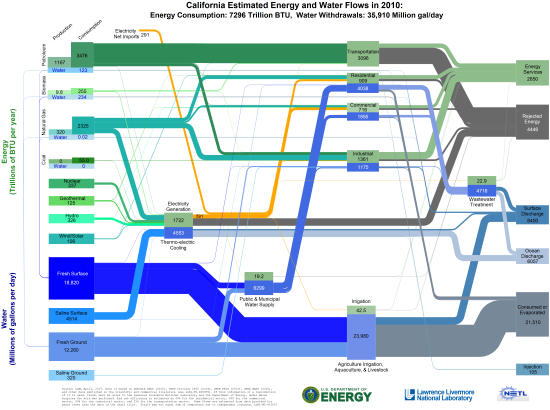 Sankey diagrams can be used to frame important discussions around energy and material resources, use and disposition. These new diagrams provide federal, state and local planners, governmental agencies, educators and nongovernmental organizations with detailed information to support decision-making about public investment in innovation and energy-water policy. 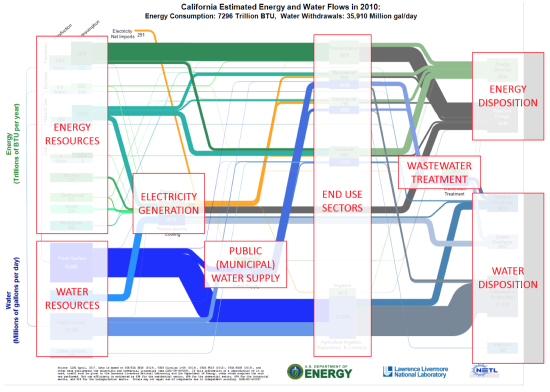 Policy intended to advance the security, affordability and sustainability of energy and water can occur at the federal, regional, state and local level. States often are responsible for instituting responsive and impactful energy and water policy. Much of the data necessary to visualize energy and water flows, and thus to inform policymakers, are collected at the state level.

There are a number of major interactions between energy and water supplies, infrastructures and disposition across the economy. The major uses of water in energy applications include:

The major uses of energy in water management include:

The analysis includes a combination of diverse sources of background data and builds upon the methodology used by DOE to create a national energy/water diagram.

The methodology and assumptions used to create these charts is described in an accompanying report, and the data depicted in the charts is publicly available for download. The diagrams, data and report are a toolbox for technologists, policymakers and educators to explore the structure of energy-water systems at the state level.