In April 2017, Buick introduced the Velite 5, its first extended-range electric vehicle, in a global debut in Shanghai. (Earlier post.) The VELITE 5 is based on the Chevrolet Volt.

The new models will leverage electrification and connectivity technology from GM and its partners, including Buick’s newest eMotion electric propulsion technology. They are based on the VELITE Concept new energy vehicle that was unveiled in November 2016. (Earlier post.) 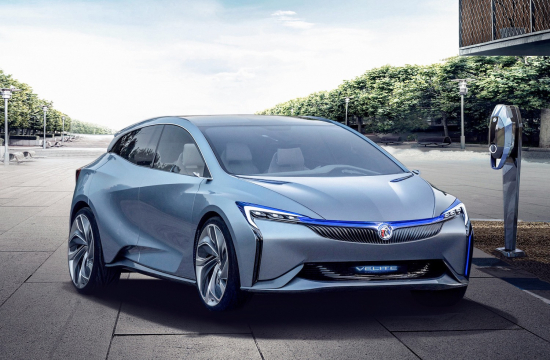 As part of the Buick Blue new energy vehicle strategy, the two models will play a key role in addressing GM’s vision of zero emissions and providing more intelligent options in its largest market.

Buick is focused on offering its customers worldwide a range of electrified options – from mild hybrids to all-electric vehicles. The new models will join the Regal Hybrid, VELITE 5 extended-range electric vehicle and LaCrosse Hybrid in Buick’s electrified lineup in China.

Well done. The Chinese market gives sine viewpoint on the BEV versus PHEV wars somewhere else. In China, the best producer offers the two kinds. The development from PHEV to BEV will be a moderate and regular process. Can i pay someone to do my assignment

I’m in person curious about the Velite 6 with the Bolt powertrain. The Bolt as most recognize may be a nice car and buyers whom I spoke to all like it. the first grievance (Superchargers aside) is that the seats and low cost feeling interior, one thing Buick will higher than chevy. If they thought of the us market, it can be marketed as an expensive Bolt.

Great ! GM displays two Chinese Buicks, a wagon and a SUV. The Buick Velite 6 will be the next model scheduled for production later this year.

Well done. The Chinese market gives sine perspective on the BEV versus PHEV wars elsewhere. In China, the best maker offers the two sorts. The improvement from PHEV to BEV will be a moderate and standard process. Assignment Writing Service

Join the best level students of your class by basically asking qualified and experienced writers to compose essay by Best Essay Help UK. They will furnish you with the heavenly nature of 100% unique and edit chip away at time at reasonable costs incorporating broad research alongside various references and references from real and tenable sources.

This is great news from the Buick that will develop the new model's China portfolio the VELITE that is a useful thing for the new energy vehicles. Day by day Chinese Buicks doing good work and launching a different kind of thing who is useful for everyone. As an assignment expert, I always support those organization and countries who do a good job for the country,

The Chinese market gives sine perspective on the BEV versus PHEV wars elsewhere. In China, the best maker offers the two sorts. Just request Pro Assignment to provide you with their Law assignment help UK and you will receive spectacular quality of 100% original and proofread work on time at affordable charges.

The Bolt as most perceive might be a great car and purchasers whom I addressed all like it. the primary complaint Superchargers aside is that the seats and minimal effort feeling inside, one thing Buick will higher.

Write My Assignment For Me in UK

Truly I appreciate the effort you done to share the information. The topic now I found keep on effective to the matter which I continued exploring for a long time you can also get help through procurepod. thanks for sharing that’s post.
Bachelor of Law

UKET is the portal who is always looking forward to providing Best Essay Help in the UK at good and amazing rates with 100% customer satisfaction and the quality of our academic writing is just outclassed.

DissertationPros is the website who is offering Best Dissertation Help UK at good rates with 100% plagiarism free all of our services are high-quality just because our first priority is client work, not money.

I don't have any idea but I like cars. so that I m here and that's fantastic regarding cars. liked it.
Thanks & Cheers!!

The new models will use zap and availability innovation from GM and its accomplices, including Buick's freshest eMotion electric drive innovation. They depend Custom Dissertation Help on the VELITE Concept new vitality vehicle.

This is good and really love it!
help with dissertation

What a great design of the car and Green Cars is the future and a great initiative for a cleaner environment. We can expect more affordable and reliable vehicles with the hybrid technologies. Those looking for a professional UK essay writing service can get reliable help with us.

I am really inspiring with this site specially this site always provide a best info!
top gogoanime

Hey, admin love to read your article and get so much data from
your blog and learn new things. You write in a good way, and i
am amazed at your blogging, you will definitely achieve success.
Please give some more information about
make google homepage in chrome

I am glad that I found this. kahoot sign up
It would be a great help for me in solving some hotmail sign in
queries if I could get research document of this forum. download kik for pc

Buick announces two new models specifically for China. It's really a piece of master and updated with new technologies and features. As a student of Mechanical Engineer and automobiles, I need to create an assignment on the new release of Buick and it will be surely done with the assistance of Best Assignment Help In UAE who are academic assignment experts company.

I hope they will bring that clean tech down to the normal Link TDI diesels asap.