Lightning Systems, a global developer of zero-emissions solutions for commercial fleets, is taking its new Ford Transit LightningElectric model (earlier post) on the road, showcasing the recently released vehicle efficiency ratings of 61 MPGe on in-town routes and 66 MPGe on highway. 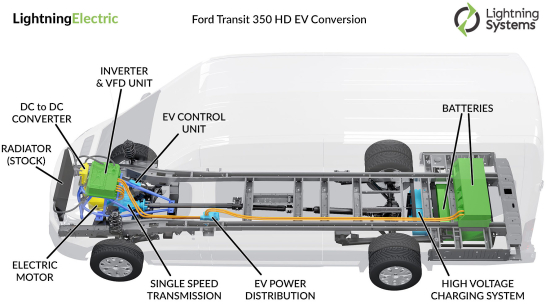 The LightningElectric is a battery-electric drivetrain package for the heavy-duty Ford Transit, a product used extensively by commercial and government fleets. Lightning was one of the first to test under the newly released 2018 CARB efficiency and range validation test procedures for medium-duty vehicles, performed at the SGS Environmental Testing Center. The all-electric Lightning product features a liquid-cooled Li-ion battery from a volume-ready world-class battery supplier that can be fast-charged in 30 minutes on DC fast charging and in six hours with Level 2 charging. Depending on battery option and drive cycle, LightningElectric has a payload capacity of up to 4,000 pounds.

Last month, Lightning Systems announced that it has developed a hydrogen fuel cell version of the LightningElectric developed in partnership with several industry partners that will extend the range of the vehicle to more than 200 miles. The fuel cell uses hydrogen to charge the electric batteries for a longer-range zero-emissions fleet solution. This product will be available in summer 2018 with a focus on the California market where significant vouchers for fuel cell vehicles and infrastructure are available.

LightningAnalytics, a new cloud-based analytics system that provides drive, route and predictive vehicle health scoring for maximum range and efficiency, is available as an option with every Lightning Systems vehicle. The analytics system provides fleets with real-time information to operate their fleet at peak efficiency.

LightningElectric is available for the Ford Transit as part of Ford’s eQVM program. The product, which went on sale earlier this year, is available for heavy-duty Ford Transits with a 10,360-pound gross vehicle weight rating (GVWR). Ford’s vehicle warranty covers the base chassis for vehicles with the Lightning drivetrain. Ford QVM dealers and upfitters perform installations and service.

The road trips are starting at Lightning Systems’ headquarters in Loveland, Colorado. One will go westbound to California and throughout that state (Sacramento, San Francisco, Fresno, San Diego, Los Angeles, Long Beach), while the other will travel eastbound through Detroit to New York (Kansas City, Detroit, Albany, New York City). The westbound tour will end at the Advanced Clean Transportation (ACT) Expo in Long Beach, California, while the eastbound tour culminates at the 30th Annual Equipment & Vehicle Show in Queens, New York.

At the end of the eastbound and westbound tours, Lightning Systems will make deliveries of the LightningElectric to Halo Event Group, a FedEx Ground contractor in New York City, and to XPO Bus Sales in Los Angeles.

This BEV would produce a lot less pollution/GHG than the liquid fuel version?

What is the max average range on batteries ONLY?

The FC extended range (up to 200 miles) is also very limited?

No need for this in the US anymore, Trump has solved the problem

I would like to see kits offered for converting select automobiles to BEVs. A BMW 3 Series car would be a good candidate.

We can backtrack the usable battery size from the statement that it will charge in 6 hours with a Level 2 charger. A Level 2 charger generally means 40 amps give or take at 240 volts, i.e. 9.6 kW (most are less, but let's use the higher number since it gives a shorter charging time). That means 57 kWh useable ... about the same as a Chevrolet Bolt battery pack. A Bolt battery pack in a Bolt is good for 200 ish miles. A Bolt sized battery pack in a Transit will give ... a lot less.

Judging by the "mpge" it's using around twice the electricity of the cars, which makes sense given the size of the vehicle, so the range is probably 100 ish miles.

Local deliveries only, at that range.

A quick glance at the system architecture sketch shows that roughly 5 times more battery volume could be put in place, provided that they are taken into account sufficiently early in the engineering.

This boosts the claim of many, including myself, that vans and trucks are actually better equipped to accommodate an adequate battery pack than passenger cars.

Electrified vans/delivery trucks doing an average of 61/66 empg instead of 13/15 mpg for liquid fuel units, are not only much cleaner but up to 4+ times more efficient, making them ideal for postal services, UPS/FedEx/Amazon and other delivery service vehicles, mass produced school buses etc.

The empg can be increased with larger or more efficient near future on board batteries and/or with greener Hydro/Wind/Solar electricity grids?

I hate the "MPGe" notation; just give me kWh / 100 km ... The prime-mover thermal efficiency is already baked into the electricity supplied to the vehicle but it's not baked into fuel consumption ratings using normal combustion-engine powertrains, and it's not correct to compare them directly.

The Transit's chassis layout isn't the best for shoving batteries underneath; the driveshaft up the middle is a nuisance which this retrofit has evidently kept. The Fiat Ducato (front wheel drive!) doesn't have that issue, and it could be addressed on the Transit by integrating the drive motor and gear reducer into the rear axle or placing it further back in the chassis with a short drive shaft, but evidently Lightning did not go to that much re-engineering of the base vehicle (probably the budget was limited). As with cars, the outcome will be best when the vehicle has the space for the battery pack designed in from the outset. The new Sprinter will have an electric version from Mercedes, which they will certainly have designed in.

I did not see a price for the Fuel Cell option but I would guess that it is much, much more.

Brian: How about Kilo or Mega Joules per kilometer? Then the units would be completely rational.

Sooner or latter, all manufacturers should demonstrate and advertise the energy used by their vehicles to go from A to Z or simply kWh per Km or how far (in Km) it can travel with one (1) kWh.

Why not both ways? That type of information is not costly to collect. Miles per gallon is no longer adequate nor very useful.