GWU research team C2CNT advances to the final round of the Carbon XPRIZE; CO2 to carbon nanotubes

Stuart Licht, a chemistry professor at the George Washington University, and his team of researchers are among the finalists announced today in the $20-million Carbon XPRIZE competition. The team’s technological process C2CNT—Carbon dioxide to Carbon NanoTubes (earlier post)—is one of ten finalists advancing to the final round in the $20M NRG COSIA Carbon XPRIZE.

The C2CNT team uses low-energy, low-cost technology developed in the Licht lab located at GW’s Virginia Science and Technology Campus to transform carbon dioxide into widely useful and highly valued products—carbon nanotubes. These lighter weight alternatives to metals have remarkable properties including strength and conductivity, and are now being used in airline bodies such as the Boeing Dreamliner, high-end sports cars, nanoelectronics, and to store energy in electric vehicle batteries.

Previously, there was not a cost-effective method for preventing and eliminating greenhouse carbon dioxide emissions from the burning of fossil fuels, which is causing global warming. We have solved that problem by inexpensively transforming the CO2 into a valuable product.

The product, carbon nanotubes, worth about a quarter million dollars per ton, should be viewed as valuable materials for companies to consider using in their products. We are already seeing that the market for such carbon composites increasing in a comparable manner to the market for plastics at the start of World War 2. CNTs have 30-fold higher strength than steel or aluminum. As each ton of these metals releases over five tons of carbon dioxide during their production, each ton of C2CNT CNT used to replace these metals avoids mover 160 tons of CO2.

The C2CNT process can utilize CO2 captured directly from the air or from an industrial smokestack. The carbon dioxide is bubbled into, and dissolved in, a molten carbonate bath. The CO2 is split by electrolysis at electrodes immersed in the molten bath into oxygen (O2) at the anode, and into carbon, as pure carbon nanotubes, at the cathode.

In addition to developing economically viable products that utilize CO2 emissions from power plants, the XPRIZE contest aims to scale up these technologies to a point that can truly impact climate change. The conversion of CO2 to pure carbon nanotubes provides the most compact and stable form to capture carbon dioxide, and diminish its greenhouse effect to mitigate climate change. 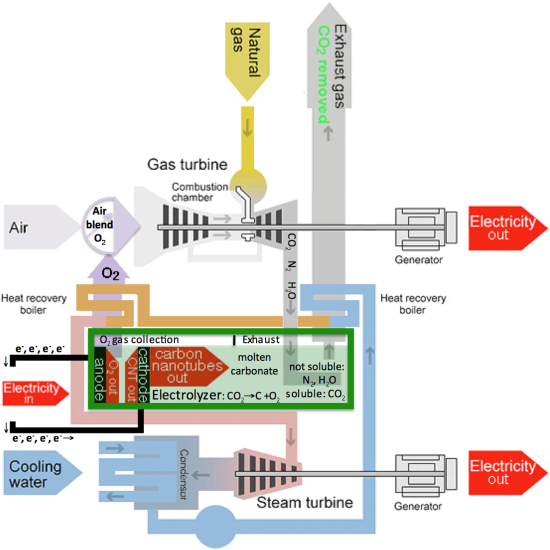 In the semifinal round of the contest, teams were judged on how much CO2 they were able to consume, the size and value of the markets for their CO2-based products, and their efficiency in using energy, materials, land, and water.

In the finals, teams must demonstrate at a scale that is at least 10 times greater than the semifinals requirements at a purpose-built industrial test site. For this final round of the competition, which runs until 2020, Licht and the C2CNT team will convert CO2 emissions from a natural gas-fired power plant in Alberta, Canada for a chance at winning the grand prize. 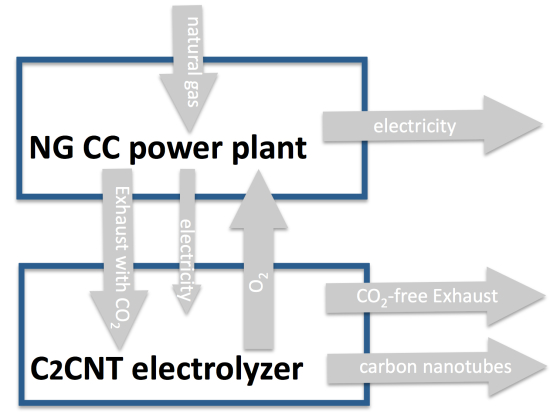 There is building consensus that unchecked climate change can lead to a planetary extinction event. Scale-up of our C2CNT process is progressing. Climate change is a consequence of the massive, accelerating buildup of greenhouse gases during the industrial age. A massive scale of operations is required to reverse this buildup. C2CNT operating with an area equivalent to less than 10% of the area of the Sahara Desert is projected to be sufficient to heal the atmosphere to pre-industrial atmospheric CO2 levels in a subsequent ten years.

The C2CNT path started in 1987 with the team leader’s theory and experiment for the efficient use of solar energy to drive simultaneous electrical and chemical production and new room and high temperature electrochemistries to store energy. The C2CNT process is the culmination of 30 years ongoing development of a technical solution to a sustainable future.

Using harmful CO2 from the air, coal and NG power plants to mass produce competitive carbon nanotubes may be what USA (and others) need to continue the use of ICEVs, NG and coal without increasing GHGs above acceptable limits?

Recycling CO2 into useful materials may be what the world requires, specially if it can be done with clean solar energy?