Mechanical engineers at the University of California, Riverside, have successfully used inexpensive materials to produce thermoelectric devices that transform low-level waste heat into electricity. While thermoelectric generators have been highly dependable—for example powering space probes such as the Voyager spacecraft for decades—their use has been limited by the expense and complexity of the materials required.

Now, researchers led by Assistant Professor of Mechanical Engineering Sandeep Kumar, have reported achieving significant thermoelectric energy conversion using a combination of a nickel-iron alloy and silicon. A paper on their results is published in the journal Physica Status Solidi Rapid Research Letters. Co-authors of the paper were graduate students Ravindra Bhardwaj and Paul Lou. 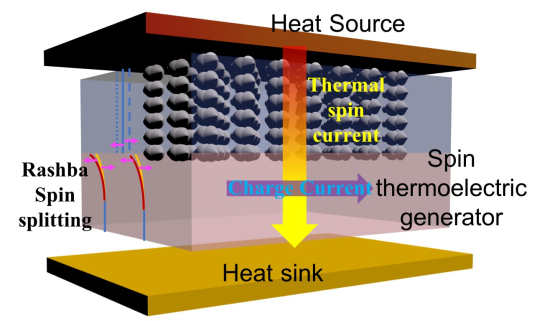 When the researchers applied heat to the Permalloy layer, they were able to produce an electrical voltage in the sandwich, due to a recently discovered physical phenomenon known as the spin-Seebeck effect (SSE). In this effect, a temperature gradient generates a spin current from the ferromagnetic substance, producing an electrical voltage in the silicon. The enhanced voltage produced in the device was due to a mechanism called the “Rashba spin-orbit coupling.”

The SSE is an interface effect that generally occurs between a spin polarized ferromagnet (FM) and a normal metal (NM). In SSE, the thermal transport takes place due to the two-step spin dependent process. In the first step, the thermal gradient leads to generation of heat current from the phonon-magnon or phonon-electron interactions. The heat current leads to generation of spin currents in the spin-polarized material. Spin current is in the form of either magnons or spin-polarized current due to electron or combination of both. In the second step, spin current is injected across the interface from FM into NM due the spin potential gradient between FM and NM at the interface. The spin to charge conversion takes place in the NM (usually heavy metal) due to inverse spin-Hall effect. The FM is spin source and the NM is the spin sink. Thus, the advantage of SSE compared to conventional thermoelectric effect is that it uses the properties of two or more materials that can be independently optimized.

… Rashba spin-orbit coupling (SOC) relies on the charge potential due to structure inversion asymmetry (SIA), which can be controlled by reducing the thickness of the sandwiched layer. The Rashba effect mediated spin-Hall magnetoresistance has also been reported in Ni81Fe19/MgO/p-Si and Ni81Fe19/MgO/n-Si thin films as well. The spin-Hall magnetoresistance arises due to ISHE [inverse spin-Hall effect], which is essential for SSE. We hypothesize the reduction in thickness of p-Si will increase Rashba SOC, leading to efficient spin to charge conversion.

To explore the thickness dependent SSE behavior, we fabricated three specimen having p-Si layer thickness of 5, 25, and 100 nm while keeping the thickness of NiFe at 25 nm. In this work, we demonstrate giant enhancement in spin mediated thermoelectric energy conversion due to efficient spin to charge conversion from Rashba SOC.

The researchers achieved one of the largest such voltages yet measured in the device with the 5 nanometer-thick silicon layer.

Such devices will be able to generate electricity in any situation in which there are small gradients in temperature. For, example, a computer chip typically heats up to about sixty degrees Centigrade, while the surrounding temperature may be twenty-five degrees. So, such spin-thermoelectric generators integrated into computer chips could generate significant amounts of electricity from heat that would otherwise be wasted.

Also, photovoltaic solar panels become quite warm, so integrating thermoelectric generators into such panels could generate additional electricity from that waste heat. Thermoelectric generators could also be integrated into automobiles, where engine temperatures can reach a hundred degrees centigrade, compared to an ambient temperature of twenty-five degrees. In such an application the generated electricity could power the car’s electronics and even provide cooling.

The latest experiments constitute only the beginning of development of the new thermoelectric technology, said Kumar, who added that a provisional patent for the discovery has been submitted.

We have only just scratched the surface of the possibilities. We believe we can generate even more energy from the same temperature gradient by using multiple layers, just as putting batteries together increases energy output. And, we are exploring other earth-abundant, inexpensive materials that could prove effective in spin-thermoelectric devices.

Good work we can use these.