Audi has launched the new Audi A6 Avant station wagon equipped with a standard 48V mild hybrid system (MHEV) for the four- and six-cylinder TDI (diesel) and TFSI (gasoline) engines. The new eight-generation A6 sedan, introduced in February this year, also features the 48V MHEV system as standard. (Earlier post.) 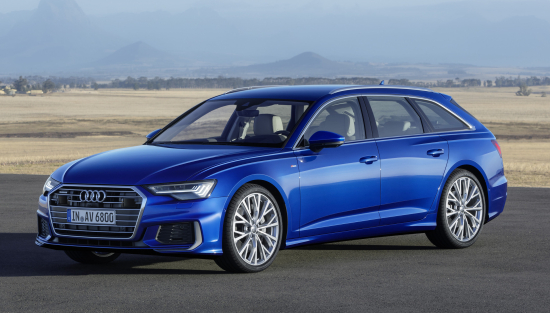 Audi offers two variants of MHEV drive systems. For the four-cylinder engines, they are based on the familiar 12-volt electrical system. However, the six- and eight-cylinder engines are equipped with a new 48-volt system that serves as the main vehicle electric system.

The lithium-ion battery with a capacity of 10 Ah that supplies this system is housed in the luggage compartment. A water-cooled belt alternator starter (BAS) is mounted to the combustion engine’s front end. A heavy-duty V-ribbed belt connects it to the crankshaft. The BAS generates a recuperation power of up to 12 kW and 60 N·m (44.3 lb-ft) of torque.

With the engine switched off, the new Audi A6 Avant can coast between 55 and 160 km/h (34.2 – 99.4 mph); the start-stop already kicks in at 22 km/h (13.7 mph). The drive management system utilizes information from the navigation map and on-board sensors to evaluate whether coasting is more fuel-efficient or recuperation. It selects recuperation, for instance, if the efficiency assistant detects a vehicle driving ahead. In the braking phases, the BAS assists in braking and can feed the recovered electrical energy into the 48-volt storage unit or use it directly for electrical consumers.

When the driver presses the accelerator pedal again after a coasting phase or a stop, the BAS restarts the combustion engine. The conventional pinion starter is only used for the initial starting operation when the engine oil is still cold and a higher starting torque is required. The BAS start is controlled based on load demands by the driver.

For example, if the air conditioner is activated and requires an engine start while the vehicle is stopped, the engine is restarted. The same is true if the driver releases the brake pedal in a start-stop phase to rejoin other vehicles in traffic. If the driver presses the accelerator pedal further, signaling a wish for significant acceleration, the engine start is executed as quickly as possible.

In addition, there is what is known as the predictive convenience start. Here, the engine is started as soon as the car ahead starts moving, even if the driver is still pressing the brake pedal.

The new 48V architecture enables more power and torque, with innovative functions leading to greater fuel savings. Over the mid-term, Audi plans to convert ancillary units such as compressors to 48 volts; they will then lend themselves to more precise need-based control as well as lighter and more compact construction.

The same applies to large static convenience consumers such as window heating and sound systems. Small consumers such as control units and lights, on the other hand, will remain in the 12-volt system well into the future.

The engines in the new A6 Avant put their power onto the road with a seven-speed S tronic or an eight-speed tiptronic and the quattro all-wheel drive. An optional sport differential actively distributes the power between the rear wheels when cornering at speed.

Audi offers dynamic all-wheel steering as an option, which makes the A6 Avant highly maneuverable. At speeds up to 60 km/h (37.3 mph), the rear wheels turn as much as five degrees in the opposite direction. This reduces the turning circle of the nearly five-meter long (16.4 ft) Avant by up to one meter (3.3 ft) to 11.1 (36.4 ft) meters.

The dynamic all-wheel steering also increases agility in corners and driving stability at higher speeds above 60 km/h (37.3 mph). In this situation, the front and rear axles steer in the same direction to enhance stability.

The driver can adjust the settings for all controlled suspensions in the Audi drive select dynamic handling system—in the modes comfort, auto and dynamic. The dynamic all-wheel steering varies its ratio and the degree of feedback, for example.