This strategy, which represents the first global climate framework for shipping, includes quantitative GHG reduction targets through 2050 and a list of candidate short-, mid-, and long-term policy measures to help achieve these targets. ICCT’s marine program director, Dan Rutherford, and senior marine researcher Bryan Comer participated in the talks over the past two weeks in London during the 72nd session of the MEPC (MEPC 72).

The strategy implies that international shipping would consume between 3.8% and 5.8% of the world’s remaining carbon budget under the Paris Agreement, up from 2.3% in 2015. Meeting the strategy’s 2050 target will require near-term policies to significantly improve the fuel efficiency of the global fleet and to promote the development and deployment of low- and zero-carbon fuels and propulsion technologies. 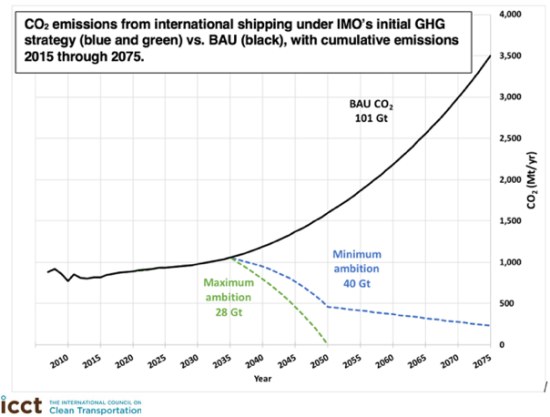 The ICCT team reports that the IMO strategy includes quantitative carbon intensity and GHG reduction targets for the international shipping sector, including:

IMO’s initial GHG strategy includes a list of measures that could be implemented to meet its emission targets. Measures are distinguished as either short-, mid-, or long-term, meaning they would be finalized and implemented from 2018 to 2023, 2023 to 2030, and 2030 or after.

Now that the initial strategy has been finalized, IMO will consider which, if any, of the short-term measures should be made mandatory, the ICCT said. An additional intersessional working group (ISWG-GHG 4) is planned for later this year, focused on developing an implementation plan for short-term measures.

MEPC 72 also addressed the implementation of the 0.50% sulfur limit. From 1 January 2020, the limit for sulfur in fuel oil used on board ships operating outside designated emission control areas will be reduced to 0.50% m/m (mass by mass). This will significantly reduce the amount of sulfur oxides emanating from ships and should have major health and environmental benefits. MEPC 72 considered for approval, with a view to adoption at MEPC 73 (22-26 October 2018), draft amendments to MARPOL Annex VI to prohibit the carriage of non-compliant fuel oil.