HEI: 95%+ of world’s population live in areas of unhealthy air

Air pollution is the leading environmental cause of death worldwide according to the State of Global Air 2018, the annual report and interactive website published by the Health Effects Institute (HEI).

Comparison of 2016 annual average PM2.5 concentrations to the WHO Air Quality Guideline. State of Global Air 2018

Worldwide exposure to PM2.5 contributed to 4.1 million deaths from heart disease and stroke, lung cancer, chronic lung disease, and respiratory infections in 2016, according to the report. Ozone, another important component of outdoor air pollution, whose levels are on the rise around the world, contributed to 234,000 deaths from chronic lung disease. 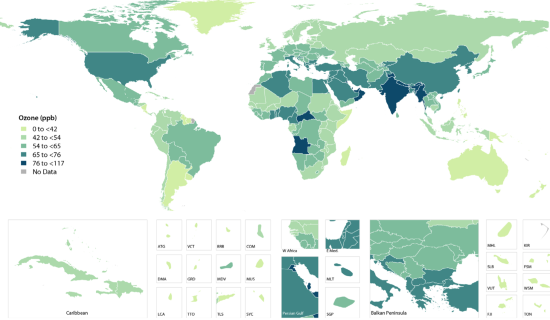 Millions of people around the world are also exposed to air pollution in their homes arising from the use of solid fuels (e.g., coal, wood, and dung) for cooking and heating.

All told, long-term exposure to outdoor and indoor air pollution contributed to 6.1 million premature deaths from stroke, heart attack, lung cancer, and chronic lung disease. That makes air pollution the 4th highest cause of death among all health risks, exceeded only by high blood pressure, diet, and smoking. 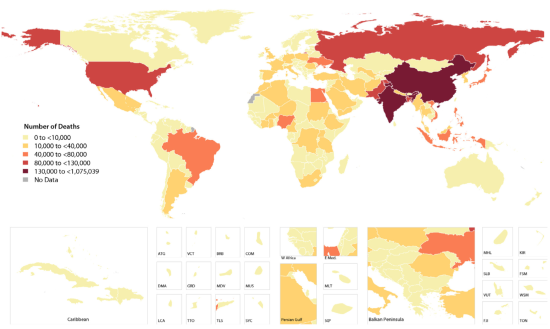 For the first time, this year’s report and website include worldwide estimates of exposure to and health burdens of burning of solid fuels in their homes. In 2016 a total of 2.5 billion people—one in three global citizens—were exposed to household air pollution from the use of solid fuels (for example, coal, wood, charcoal, dung, or other biomass) for cooking and heating.

Most live in low- and middle-income countries in Asia and Africa, and face a double burden: exposure to both indoor and outdoor air pollution.

Household air pollution can be a major source of impact in outdoor air: with indoor pollution emitted to the outdoor air the largest cause of health impacts from among all sources in India, contributing to 1 in 4 air pollution related deaths India, and nearly 1 in 5 such deaths in China.

The analysis found that China and India together were responsible for over half of the total global attributable deaths. The study also finds that increasing exposure and a growing and aging population have meant that India now rivals China for among the highest air pollution health burdens in the world, with both countries facing some 1.1 million early deaths from outdoor air pollution in 2016.

In China in 2013, the leading source contribution to deaths attributable to PM2.5 was industrial coal; transportation followed as a close second. In India in 2015, however, the leading source contribution by far was residential biomass burning, followed by anthropogenic dust, powerplant coal, industrial coal and open burning. Transportation was a distant 7th.

China has made initial progress, beginning to achieve air pollution declines; in contrast, Pakistan, Bangladesh, and India have experienced the steepest increases in air pollution levels since 2010.

The State of Global Air 2018 annual report and accompanying interactive website are designed and implemented by the Health Effects Institute in cooperation with the Institute of Health Metrics and Evaluation (IHME) at the University of Washington and the University of British Columbia.

IHME is an independent population health research center that coordinates the annual Global Burden of Disease (GBD) study, a systematic scientific effort to quantify the magnitude of health loss from all major diseases, injuries, and risk factors in populations across the world. Its results are published each year in the international medical journal, The Lancet.

HEI provides leadership for the air pollution portion of the GBD; HEI’s State of Global Air is the only report and website where all of the estimates of exposure to air pollution and their burden of disease included in the GBD air pollution analyses are made available for full public access.

The Global Burden of Disease leads a growing worldwide consensus—among the WHO, World Bank, International Energy Agency and others—that air pollution poses a major global public health challenge. Nowhere is that risk more evident than in the developing world, where a third of the world’s population faces a double burden of indoor and outdoor air pollution.

The Global Burden of Disease is an international effort to estimate the number of deaths and lost years of healthy life due to about 300 diseases in 195 countries, and how much of this burden is caused by 84 different risk factors, including diet, high blood pressure, tobacco smoking and air pollution.

The Institute for Health Metrics and Evaluation (IHME) leads an international team of more than 2000 scientists from 130 countries in conducting the analysis. The latest estimates of deaths and lost years of healthy life from air pollution, diet, smoking, and other risk factors for all countries can be found in the latest GBD analysis, published in 2017.

Wonder how many years we will need to seriously harm close to 100% and kill 50% of all living creatures with polluted air, polluted ground water, polluted seas, GHGs and deadly chemicals used on farms/produce and animal feeds?

Stopping recent disaster/diseases on Florida oranges, bananas, corn, bees and many edible products are and will be major chalenges in the near future. Producing safer foods will be more difficult and costly?