The Australian, Japanese and Victorian governments and a consortium of companies have launched the pilot of an innovative supply chain that will deliver liquefied hydrogen from the Latrobe Valley in Australia to Japan.

The Hydrogen Energy Supply Chain (HESC) project will convert brown coal from the AGL Loy Yang mine into hydrogen at an adjacent site and then transport the gas by road in high pressure tube trailers to a liquefaction terminal at the Port of Hastings. 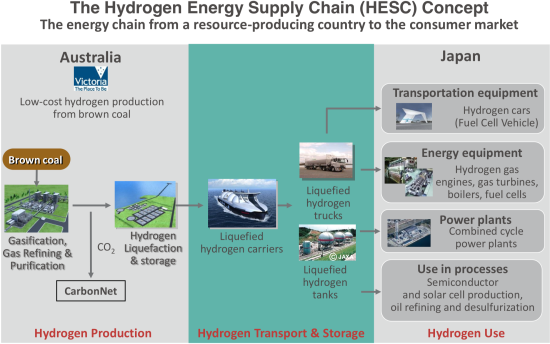 The amount of hydrogen being produced for the pilot is small and the emissions released are expected to be minimal.

The Port of Hastings facility is expected to:

The pilot phase specialized marine carrier is expected to:

To mitigate any impact, carbon offsets will be purchased by the consortium. If the project is expanded in the future, the project partners recognize the need for carbon capture and storage.

The HESC Project brings together industry leaders in Australia and Japan and is led by Kawasaki Heavy Industries (KHI). It includes Australia’s AGL, the operator of the country’s largest electricity generation portfolio, as well as Japanese energy and heavy industries corporations, J-Power, Iwatani, Marubeni Corporation and global energy company Shell.

To date, the HESC project team has completed the Front End Engineering and Design work. Construction of the pilot facility in Australia is expected to commence in early 2019, following planning approvals.

Will this produce less or more pollution (per e kWh) as Alberta's Tar Sands. How and who will use all the excess CO2 produced?

CO2 can be stored in empty fossil wells for later use.

It's just a political fix. The 50+50 m($100,000,000 .au) from state and federal govt's will make a few hardliners and gullible fools as well as the technocrats at C.S.I.R.O. happy for a few minutes as they wil have a bucket of money to play with.
It will Make the Japanese politicians look good for possibly the rest of their term in office. It WILL help Kawasaki develop their H2 transport technology and possibly be a proving ground for the CSIRO Ammonia /Hydrogen transport concept. Almost everyone will look very pleased with themselves and the media attention they seek.
But it isn't likely to be low carbon compared to just about any of the alternatives being considered globally.
The low carbon bondoogle is simply tha tthe .au and .vic gov'ts can claim 0 carbon and the Japanese as well. So It would seem to be just what the doctor ordered for solving international carbon emission targets while satisfying the climate skeptics demands for fossil fuel industry assistance from taxpayers.
Lets not pretend this has anything to do with either low carbon , low cost reducing global warming, or even providing long term employment.
It'simply politically expedient to defraud the ignorant while looking good and lining your pockets.

I think we are led on these deceptions by lobbyists or advertising people that have vested interests in seeing companies profit margins either retained or increased.
We live in a world where half of inventions are obsolete before they hit market.
That is a worrying thought. But the coal gasification and carbon storage technologies are not new technologies and they have a terrible failure rate.
They haven't got a succes rate in terms of carbon reduction or sequestration at any scale.
Kawasaki H.I. may well be in the buisness of transporting renewable hydrogen according to the glamour postings and spruking aimed at investers and public relations but when they get involved with this behaviour it transgresses credibility.
Linc energy tried this (underground ) in Queensland a few years ago and the resultant mess has caused permanent serious damage. The taxpayer is once again left to pay for the clean up.