Hubject and Daimler pilot Plug&Charge via ISO 15118 on smart EQ fortwo/forfour; no card or app needed

Drivers of plug-in electric vehicles have needed to have the right charging card or smartphone app to gain access to public charging stations. To simplify this process, Berlin-based emobility specialist Hubject has developed a solution which enables customers to access charging stations by means of a digital certificate: Plug&Charge via the international standard ISO 15118.

Daimler and Hubject have now concluded the pilot phase of the system in cooperation with the charging point operator ebee smart technologies. With the new smart EQ fortwo/forfour, Daimler now has the first electric vehicle in series production that integrates support for Plug&Charge.

Hubject’s ISO 15118-compliant PKI (public key infrastructure) is a first-of-its-kind: based on the latest ISO 15118 standard, including the usage of X.509 v3 certificates, TLS and cipher suites. 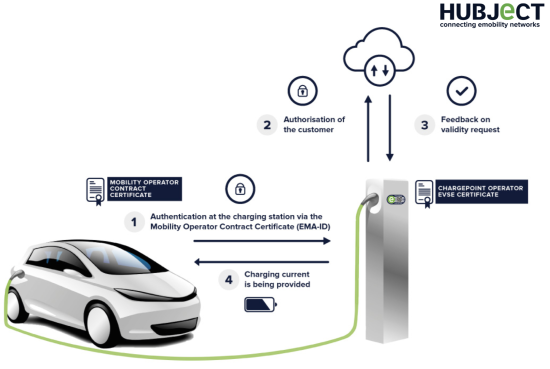 The Plug&Charge communication and charging process can be divided into four steps. Source: Hubject.

ISO 15118 governs the automated, secure exchange of information between the vehicle and the charging infrastructure based on digital certificates.

Once the connection between the vehicle and the charging station is established, the authorization data from the driver is transmitted and compared in encrypted form. After the check has been completed, the charging process starts automatically and the payment process is then carried out without any further action.

Plug&Charge via ISO 15118 thus enables secure authentication and authorization of a charging process for the first time, also available offline, where all that is required is to plug in the charging cable: Plug&Charge.

Daimler AG has been a shareholder of Hubject GmbH since 2012, along with the BMW Group, Volkswagen Group, Bosch and others. In addition to the shareholders of Hubject, all market players worldwide across all industries can now join Hubject’s ISO 15118 ecosystem.

The ISO 15118 standard also describes further types of applications such as the future integration of electric vehicles in the energy grid (smart charging), thus laying the foundations for a secure, sustainable charging infrastructure.

Blue tooth protocol and firmware can do it all.