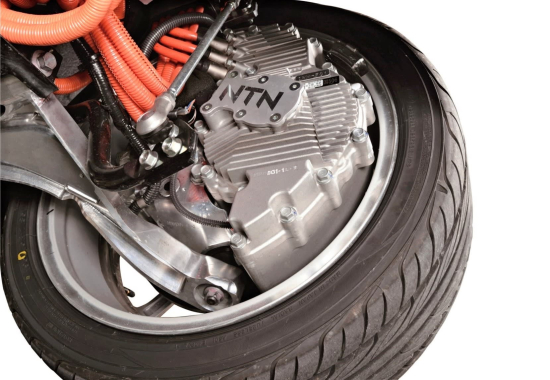 NTN began work on in-wheel motors in 2003, deploying and testing successive iterations on different types of compact, lightweight EVs. In 2016, NTN provided five prototypes of converted EVs with its latest in-wheel motor drive system to both Mie Prefecture and Kuwana City in Japan.

The thickness of the 30 kW in-wheel motor part was reduced by using a motor shaft with an offset layout to the vehicle shaft and by keeping its width within the wheel, allowing it to be mounted without changing the vehicle’s suspension or steering structure. This can be expected to enable reduction in cost and time of development. 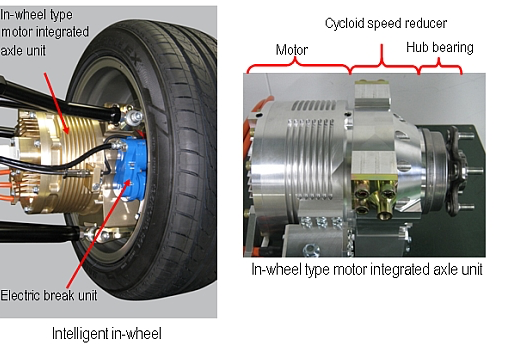 With an increasing focus on the electric vehicle market, NTN has also developed a two motor e-axle that consists of motor drive units with an inverter. 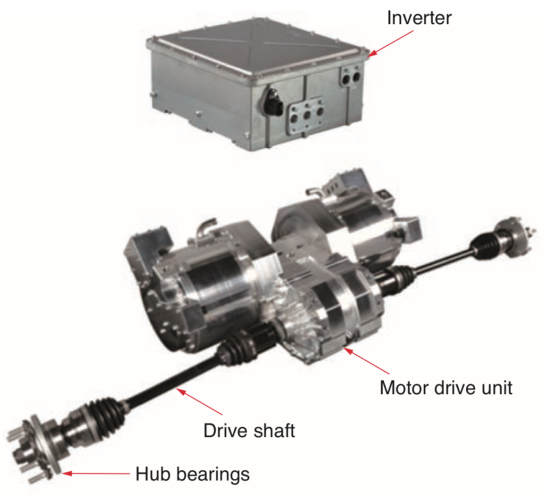 The down side is the unsprung weight which will affect handling and is a reason this approach isn't popular among light passenger vehicles, and is never used in race cars(ha).

You want motors inboard of the wheel bearing blocks.

There are lots of problems with the hub/ wheel motors including cables movement following suspension that need more work. I think it should possible to bring the power through structural electrically insulated route effectively eliminating that part of the cable run.

Love the twin motor pic.
Note the twin motors integral to the suspension pivot that should enable power cable connection opportunities. One possibility gleaned from the pic is to have the motors fixed and the gear train (motor drive unit) pivot on the intermediate or idler gear axis. It is easy to see how the basic layout is giving benefits to fixed wiring, motors on seperate axis allowing more size and ratio options and the outputs are narrow so smaller dropshaft angles.
The 3 axis would be motor, idler/suspension pivot and output drivesaft/wheel.

The wheel motor cables have a lot movement to deal with .

It is a whole lot easier and less troublesome in most applications to do what's shown in the bottom illustration: Have the motor and gear reducer assembly fixed to the chassis (generally as part of a subframe that also hangs onto suspension attachment points) and run the shaft power out to the wheels through halfshafts and CV joints. This way the motor doesn't have to move relative to the chassis, so there is no flexing of the high-power cables, it doesn't add unsprung weight, it doesn't try to share space with suspension and brake components, and the space between the wheels is generally more or less available due to suspension components anyhow so you might as well use it. Halfshafts and CV joints are very efficient and there is essentially no downside to doing it this way ... which is why all current EVs from volume manufacturers do it this way.

Whether you use a single motor and an open differential, or two separate motors and drive units to give built-in "limited slip" and "torque vectoring", is a cost versus benefit decision. Installation of the powertrain components on a subframe that in turn bolts to the bodyshell means that it is even possible to have both arrangements, i.e. lower end models can be single motor and open diff and higher end versions of the same vehicle can be dual motor.

'Course, doing it that way (which is conventional) means there would be no subject for this article ...