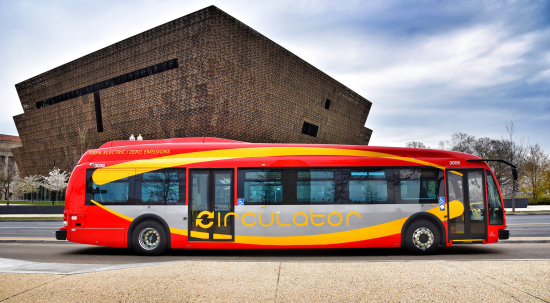 Currently, the Circulator provides door-to-door transportation to more than 25 museums, monuments and memorials along the National Mall. Providing more than five millions trips each year, the Circulator only costs $1 to ride, ensuring that residents, commuters, and visitors alike have access to fast and affordable transportation.

With 14 Catalyst E2 buses, the D.C. Circulator will displace more than 88,900 gallons of diesel per year, and eliminate more than 243,980 pounds of CO2 emissions annually. Over their 12-year lifetime, the 14 Proterra buses will result in fuel and maintenance cost savings of more than $6 million. The Catalyst E2 also holds the world record for an electric vehicle travelling 1,013.76 miles on a single charge.