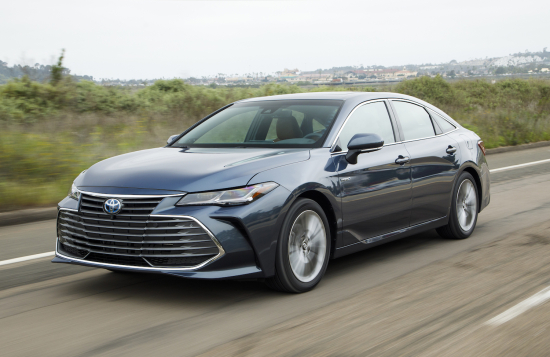 New for 2019, the highly compact battery pack now resides under the rear passenger seat (instead of the trunk), as a result of improved TNGA packaging and for the betterment of a lower center of gravity.

Efficiencies on many levels are seen with the implementation of the new PCU. Energy loss in the conversion efficiency of the transaxle and electric motor is reduced by approximately 20%, and its cooling system’s energy loss is cut by approximately 10%. 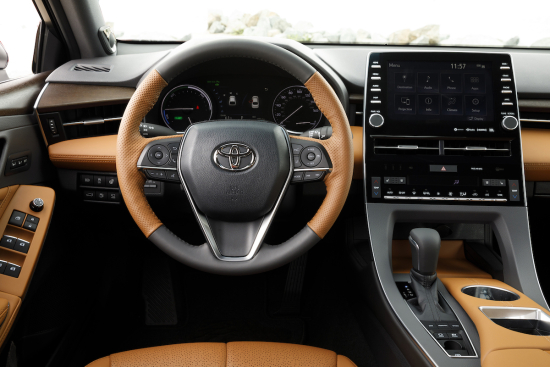 Auto Glide Control (AGC), yet another of Avalon’s fuel-saving technologies, automatically calculates efficient coasting. When driving normally, engine braking will slow the vehicle down when the driver lifts off from the accelerator pedal. However, to avoid aggressive engine braking, AGC limits the loss of vehicle speed through an automatic drive setting that acts more like a neutral gear, allowing the vehicle to coast to the stoplight.

A light indicating “AGC” is illuminated on the Multi-Information Display (MID) when AGC is active to alert the driver that less deceleration torque than normal is currently being used. AGC can only be activated when the vehicle is being operated in the ECO drive mode setting.

Adding more than a sprinkle of spark to Avalon HV’s sporty skillset is the inclusion of a new Sport drive mode and Sequential Shiftmatic technology. The new Sport drive mode applies power from the hybrid system for improved acceleration and, as a bonus, all drive modes, including Sport, can each be used while EV mode is activated. With Shiftmatic technology, XSE drivers can “shift” through the Continuously-Variable Transmission’s six simulated gears via steering-wheel mounted paddles or the gearshift.

The VVT-iW system is employed on the intake cycle, with VVT-i (Variable Valve Timing - Intelligent) activated on exhaust. With VVT-iW in place, engineers ensured optimal torque creation at all engine speeds, and minimized pumping losses during the closing of intake valves, which furthered fuel efficiency. The use of Atkinson cycle, too, reduces the V6’s fuel appetite, particularly in cold climates or during wide-open throttle (WOT) situations.

A new torque converter provides a wider range of lock-up operation (versus the outgoing 6-speed automatic transmission) to imbue a more enveloping and direct driving feel. The converter contributes to low fuel consumption and passenger comfort, since engine revving is kept to a minimum.

Design. Using the adaptable TNGA core, the Calty team penned Avalon’s exterior to be longer, lower, and wider than before. Unique stamping methods also aided in the deep draw panels that express distinguishable sculpted forms. Complex surfaces could now be shaped, such as at Avalon’s door handles that coincide with its profile’s bold character line. A distinct, carved lower rocker panel behind the front wheels visually exemplifies the design opportunities of TNGA.

Toyota has run out of ideas on designing front ends. Looks like a larger Ford Focus.

They have changed the Camry a lot to make it look more sporty.
As long as Camry and Avalon hybrids get over 40 mpg that is beautiful.