The “classic” high-energy capacity Lithium-sulfur battery is predicated on the use of a sulfur-based cathode and a Lithium-metal anode. Among the issues hampering the commercialization of this attractive technology are the safety and performance issues associated with the use of the lithium-metal anode. Accordingly, a number of different approaches have been taken to try to address these issues.

Now, a team from Spain, Italy and Germany reports an efficient lithium‐ion battery using an enhanced sulfur–carbon composite cathode that exploits graphene carbon with a 3D array (3DG‐S) and a silicon oxide‐based anode (LiySiOx–C)—i.e. avoiding the use of a Li metal anode entirely.

In a half-cell, the 3DG-S electrode showed capacities of 1200 and 1000 mAh g−1 at C/10 and 1C rates, respectively. The LiySiOx–C/3DG‐S battery showed a capacity of approximately 460 mAh gS−1 delivered at an average voltage of approximately 1.5 V—yielding a theoretical energy density approaching 700 Wh kgS−1—over 200 cycles, suggesting that the characterized materials would be suitable candidates for low‐cost and high‐energy‐storage applications. A paper on their work is published in the journal ChemSusChem. 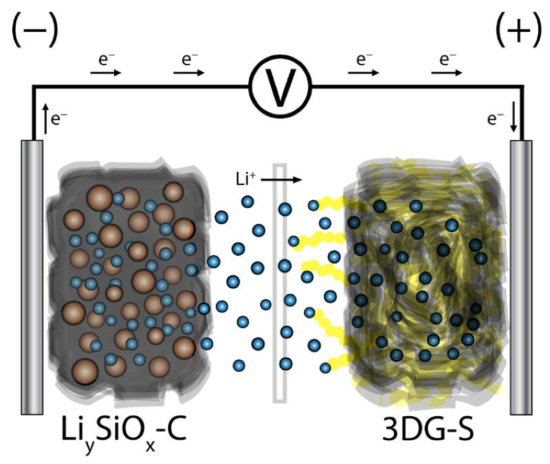 Despite the appealing features of the Li/S battery in terms of cost, environmental impact and performance, its commercialization has been limited so far owing to issues related to the lithium-metal anode. Indeed, the use of lithium metal at the negative side may lead to safety issue associated with possible lithium dendrite growth, short circuit and thermal runaway. Therefore, the lithium-ion configuration may improve the cell cycle life, and performances by avoiding the lithium dendrite formation and by decreasing the interfacial resistance, thereby increasing the cell reliability. Indeed, the lithium-ion anodes are typically characterized by a higher chemical stability than the lithium-metal electrode, yielding to high-energy, safe, and low-cost lithium-ion sulfur cells. Accordingly, safety and stability of the sulfur cell may be increased by replacing the lithium-metal anode by graphite, amorphous carbons and lithium-alloying materials.

Following this trend, we report in this study a new promising battery formed by combining a sulfur-3D graphene composite cathode and a nanostructured silicon-carbon anode. The lithium-ion sulfur cell is investigated in terms of electrochemical characteristics in view of possible use as an advanced system for high energy storage application.

The sulfur-carbon composite cathode material was synthesized by reduction step and microwave-assisted solvothermal technique. The Li-alloying anode was prepared by the sol-gel method and lithiated by surface treatment.

Good, this is better.

The price of batteries should drop fast if sulfur can be used; the oil industry produces mountains of sulfur especially now that it is being extracting from fuels to clean up the air.

Sion has had lithium sulfur for years. You either get cycles or capacity, but not both. I think they may conquer this soon enough to make a difference.

SJC:
Let's hope so because it looks as if Li-ion batteries in the U.S. are stuck at a high price because of increasing demand.