DOE: nearly two-thirds of US plug-in vehicles were assembled in the US

Nearly two-thirds of the US plug-in vehicle (PEV) population—battery-electric and plug-in hybrid light vehicles—were assembled in the United States, according to the US Department of Energy (DOE). 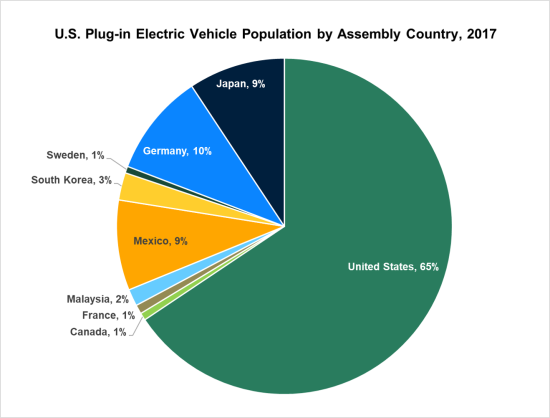 Ten percent of US PEVs were assembled in Germany, with 9% each coming from Mexico and Japan. Each of the other countries represented less than 4% of the US PEV population.

Electric vehicle population was based on vehicle sales. Assembly country may be different than the country where some vehicle parts were manufactured.

Those stats are relevant/restricted to PEVs sold in USA only.

China manufactured and sold about 66% of all PEVs in the world.