In Beijing, INFINITI Motor Company announced it is developing an all-new electrified vehicle platform influenced by the Q Inspiration concept car. (When INFINITI unveiled the Q Inspiration at NAIAS this January, the concept was powered by a VC-Turbo variable compression ratio engine powertrain. Earlier post.) 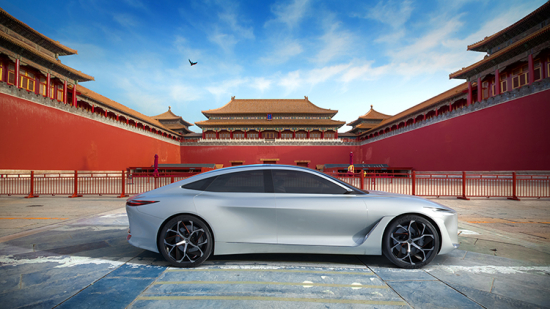 Q Inspiration before the Meridian Gate at the Forbidden City in Beijing.

INFINITI will produce an electrified vehicle in China—one of five new vehicles it will build in China over the next five years—on this new platform at a site still to be announced.

INFINITI is developing a new platform for electrified vehicles inspired by the Q Inspiration concept car, which shows the new design language for the age of autonomy and electrification. We very much had China in mind when designing the Q Inspiration, which shows a very sporty, performance-oriented electric concept, with a much bigger interior space.

The Q Inspiration cabin follows a minimalist approach. Advanced powertrains have liberated INFINITI’s designers from the constraints of traditional powertrain architecture to realize a spacious interior.

Prototype 9 started as an after-hours idea and grew into a fully fledged prototype. Our teams have proven skills in manufacturing, engineering, design and advanced powertrains, yet they wanted to bring their own traditional craftsmanship to the project. They made Prototype 9 a reality, a result of their ingenuity. Prototype 9 blends modern technology and hand-crafted details paying tribute to the forebears of INFINITI.

INFINITI operates in China via a partnership with Dongfeng Motor Company Ltd. (DFL), China’s largest automotive joint venture. In 2017, INFINITI sold a record 48,408 vehicles in China, a 16% increase from the prior year.