EEA: no improvements on average CO2 emissions from new cars registered in 2017 in Europe

Efforts to improve the fuel efficiency of new cars sold in the European Union (EU) stalled in 2017 compared to 2016, according to provisional data published today by the European Environment Agency (EEA). While past years have seen steady declines, new passenger cars registered in 2017 emitted on average 0.4 grams (g) of carbon dioxide (CO2) per kilometer more than in 2016.

According to the provisional data, the average CO2 emissions of a new car sold in the EU rose by 0.4 g/km last year to 118.5g/km. Since 2010, when monitoring started under current EU legislation, official emissions have decreased by 22 g CO2/km (16 %). Further improvements need to be achieved by manufacturers to reach the 2021 target of 95 g CO2/km . 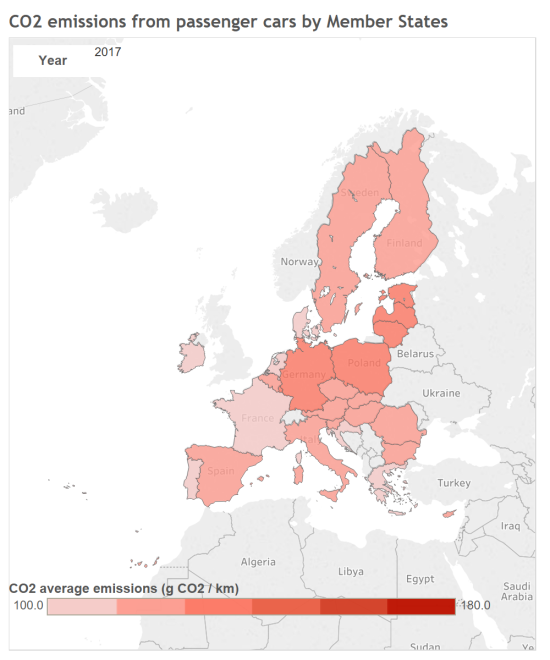 According to the EEA:

The estimate based on NEDC is way out of reality. According to this study average diesel is emitting 117.9 g CO2/km, that means that average diesel in EU is consuming 4.5 l/100 km, what a joke.

Manufacturers have been cheating NEDC more and more, every new car had lower consumption on paper but not in reality, but now before WLTP and RDE this game has stooped, because every one want to make the transition with as little diference as possible, so my guess is they stooped "tuning" NEDC 2 years ago, when dieselgate broke loose.

Study based on NEDC new car data has nothing to do with reality.

Latest ICEVs sold in USA and Western Canada are heavier, have higher emissions and consume more fuel that previous year.

The increase use of heavy SUVs and Pick-ups may be the main reasons?