By joining CMC, Autotalks becomes part of an industry-wide effort to have motorcycles be a part of the C-ITS conversation which will significantly contribute to their safety on the road.

CMC is a collaboration between manufacturers, suppliers, researchers and associations to make motorcycles part of the future connected mobility. The founding members of CMC include BMW Motorrad, Honda and Yamaha, and other member motorcycle manufacturers include Ducati, Kawasaki, KTM and Suzuki.

Autotalks’ 5.9 GHz band DSRC-based V2M solution, launched in June 2017, is based on a second-generation V2X chipset developed by the company which allows motorcyclists and other drivers to receive alerts on life-threatening situations in order to avoid road accidents.

Autotalks’ V2M solution enables detection of motorcycles that are not visible to the human eye, cameras or any other sensors. Autotalks says that the advantages of its solution include, among other things, simple integration, low power consumption, the smallest form factor, highest range of operating temperature and smallest physical size, which results in its resistance to the strong vibration and challenging environmental conditions of residing on a motorcycle. 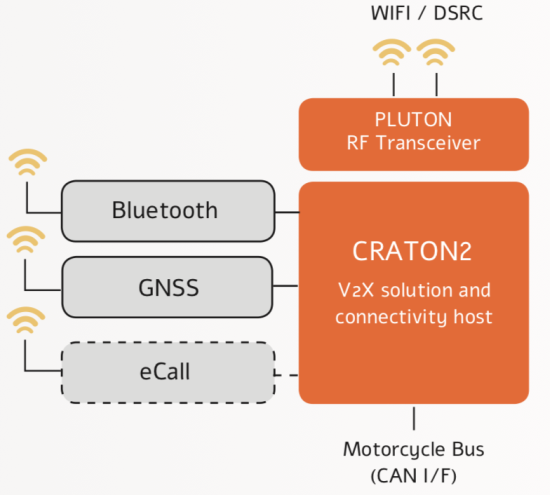 Autotalks also offers flexibility in the content of V2X applications. Some solutions will just transmit the location of motorcycles to warn the drivers—i.e., “Here-I-am” modules. Some solutions may run a full safety application suite, alerting the motorcyclist to dangers. Both can be supported with Autotalks smallest size solution at a cost-optimized price.

According to World Health Organization data from 2015, 23% out of 1.25 million traffic fatalities were motorcycle riders. A 2013 study conducted by the US National Highway Traffic Safety Administration (NHTSA) indicated that motorcyclists have a 26-fold higher risk of death than those who drive other vehicles.

According to studies, V2M communication will reduce road accidents by 80%. Motorcycles have higher chances of being involved in a car crash which is highly likely to end up in a fatality. Studies show that in approximately one third of motorcycle accidents the motorbike is not visible to the car driver. This is one of the reasons why motorcycles are at a greater risk to end up in a crash. Autotalks is committed to minimizing motorcycle accidents until there will be zero accidents on our roadways.