Researchers at Zhejiang University of Technology in China have fabricated magnesium borate (of the form Mg2B2O5) nanowire-enabled poly(ethylene oxide) (PEO)-based solid-state electrolytes (SSEs) for solid-state lithium-ion batteries (SSLIBs). As reported in their paper in the ACS journal Nano Letters, these SSEs have enhanced ionic conductivity and a large electrochemical window.

When these multifunctional SSEs were paired with LiFePO4 cathodes and lithium metal anodes, the SSLIBs showed better rate performance and higher cyclic capacity than batteries with solid-state electrolytes without the nanowires: 150, 106, and 50 mAh g–1 under 0.2 C at 50, 40, and 30 °C. 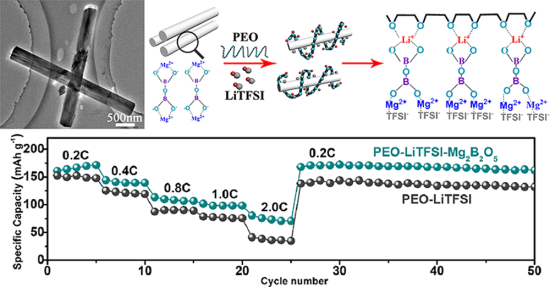 Distinguished from the leakage and combustion of organic liquid electrolyte, solid-state electrolytes (SSEs) including sulfide, oxide, and polymer with relatively satisfactory safety have thus have caught people’s eyes as promising next-generation battery technology.

… Mg2B2O5 nanowires, which have cheap fabricating cost and a facile preparing process, are also lightweight, high-tenacity, have high wear resistance, and are flame-retardant.

… Considering all of these outstanding characteristics, we fabricate Mg2B2O5 nanowires with excellent performance and originally employed them in the poly(ethylene oxide) (PEO)-based SSEs as additive, which effectively improves the ionic conductivity, increases the mechanical properties, and enhances the flame-retardant performance of the SSEs. In addition, we investigate the mechanism of improved lithium ion transport in SSEs. When the multifunctional composite SSEs are used, the SSLIBs cycled at 30−50 °C with different current densities could deliver enhanced rate performance and cyclic stability. Hence, this novel multifunctional additive and the Li migration mechanism within these nanowires embedded system may provide SSEs design criteria for constructing high-performance SSLIBs with satisfactory security.

Xinyong Tao and colleagues had previously made magnesium borate (Mg2B2O5) nanowires, which had good mechanical properties and conductivity. They wanted to see whether these properties would also be imparted to batteries when these nanowires were added to a solid-state polymer electrolyte.

The team attributed the increase in conductivity to the improved motion of PEO chains and the increased Li migrating pathway on the interface between the magnesium borate nanowires and PEO-LiTFSI.

The group also tested the flammability of the electrolyte and found that it barely burned.

Li, Mg, Mn, and Al have been identified as candidates for battery anode material because of highly active valence electrons. The Argonne Labs, which runs on taxpayer funding, have been researching these elements for the last 5-6 years. Breakthroughs?...none known yet!