The project is a first step toward realizing the 2030 vision of a low-carbon hydrogen supply chain formulated by the Aichi Low-carbon Hydrogen Supply Chain Promotion Association, a body which includes the Aichi prefectural government, companies operating within the prefecture, municipal authorities, and experts. The goal of all entities is the realization of a hydrogen-based society spanning the entire region through mutual coordination and all-inclusive efforts.

Background. The Association was established in October 2017 to promote the commercialization of a low-carbon hydrogen supply chain and to bridge entities including industry, academia, and government throughout the prefecture in order to achieve this.

Hydrogen is a useful energy source for realizing a low-carbon society. Without emitting any CO2 during use, hydrogen can be produced from renewable resources (including wind power, solar power, and biomass [sewage sludge]) and can be stored and transported for use in various fields. Hydrogen has the potential to support the transition to a low-carbon society, not only in the transportation field, but also in various fields including industrial fields.

To further promote measures to combat global warming, the low-carbon footprint of the hydrogen supply chain as a whole, through use of renewable resources and the concept of “production, transportation, and use (of hydrogen),” has been promoted in Aichi Prefecture. In line with this, the Aichi Low-Carbon Hydrogen Supply Chain Promotion Association authored the 2030 Vision, which envisions an Aichi Prefecture in 2030 that makes active use of low-carbon hydrogen in 2030, as well as a roadmap to achieve this. 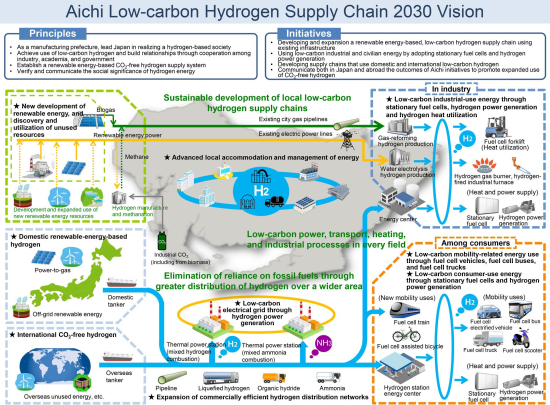 Main points. Building on Japan’s Strategic Roadmap for Hydrogen and Fuel Cells as well as the Basic Hydrogen Strategy, the 2030 Vision aims to achieve a hydrogen-based society ahead of the rest of country, leveraging the prefecture’s experience and expertise in monozukuri (all-encompassing approach to manufacturing).

The three pillars of the 2030 Vision are:

The project. The project is designed to construct a subsistent low-carbon hydrogen supply chain to produce, supply, and use hydrogen generated from renewable resources within the prefecture, as the first step toward achieving the 2030 Vision.

In this project, Toho Gas is expected to produce city gas using biogas generated from sewage sludge at the Chita City Southern Sewage Treatment Center, which is then transported to Toyota’s Motomachi Plant through existing city gas pipelines. The city gas derived from biogas is passed through gas reformers at the Motomachi Plant, whereby low-carbon hydrogen, which is used to power the Toyota Industries fuel cell forklifts (FC forklifts) in the plant, is produced, compressed, and stored. 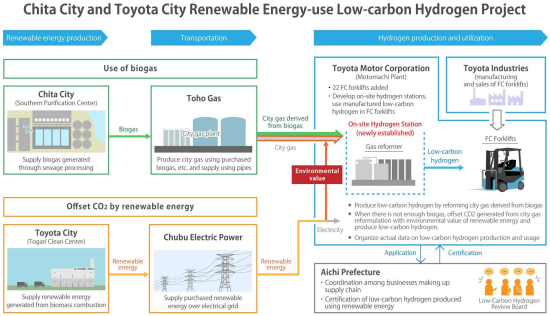 Additionally, by supplying Toyota with renewable energy from Chubu Electric Power generated at the Toyota City Togari Clean Center through heat from waste incineration (biomass incineration heat), CO2 emissions from city gas that would be used when there is a biogas shortage can be offset.

In order to increase awareness of this supply chain, Aichi Prefecture has established a Low-Carbon Hydrogen Certification system that certifies hydrogen produced using renewable energy as “low-carbon hydrogen.” The project is the first such to be certified.

The project is designed to transport renewable energy—such as biogas used for hydrogen production—through the existing energy infrastructure of city gas pipes and the electrical grid to produce and supply hydrogen near where it is used. This will allow costs to be reduced by eliminating the amount of capital investment necessary for the facilities required to compress and transport hydrogen, as well as their maintenance expenses, and to achieve early commercialization through the use of existing energy infrastructure.

In the future, in addition to discovering and using biogas and developing new renewable resources, such as biomass power generation and wind power generation, the partners intend to expand the deployment of fuel cell forklifts and the use of hydrogen through the early introduction of industrial-use fuel cells and small-scale hydrogen generation inside plants.

Low carbon hydrogen seems to be a real oxymoron as long as you are burning fossil fuel to generate electric power. The wind and solar power could more efficiently be used to displace the electricity being generated by fossil fuels. Unfortunately, Japan closed most of their nuclear power facilities after the tsunami and increased their dependence on coal.