Home About Contact RSS GCC Twitter Newsletter
DOE awarding $60M to 13 projects for advanced nuclear technology development; $40M of that to NuScale for SMR
EIA: US exported a record amount of fuel ethanol in 2017

Shell Offshore Inc., a subsidiary of Royal Dutch Shell plc, made its final investment decision for Vito, a deep-water development in the US Gulf of Mexico with a forward-looking, break-even price estimated to be less than $35 per barrel. This decision sets in motion the construction and fabrication of a new, simplified host design and 2subsea infrastructure.

In 2015, Shell began to redesign the Vito project, reducing cost estimates by more than 70% from the original concept. Vito’s cost savings are due to the simplified design, in addition to working collaboratively with vendors in a variety of areas including well design and completions, subsea, contracting, and topsides design. 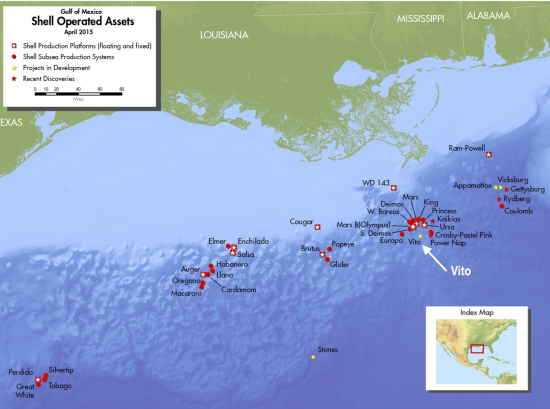 Located over four blocks in the Mississippi Canyon area of the Gulf of Mexico, the Vito development will consist of eight subsea wells with deep (18,000 feet) in-well gas lift.

With a lower-cost developmental approach, the Vito project is a very competitive and attractive opportunity industry-wide. Our ability to advance this world-class resource is a testament to the skill and ingenuity of our development, engineering and drilling teams.

With global production progressing to more than 900,000 boe per day, Shell has deep-water projects and opportunities in the US, Brazil, Nigeria, Malaysia, and Mexico.