EIA: plug-in vehicles displaced 216 million gallons of gasoline in US in 2017

When gasoline consumption of conventional internal combustion engine (ICE) vehicles is compared with similar sized plug-in vehicles operating on electricity, plug-in vehicles on the road displaced 216 million gallons of gasoline in 2017, according to the US Energy Information Administration (EIA). Gasoline displacement from plug-in vehicles is about 39% more than it was in 2016 and about twice as much as 2015. 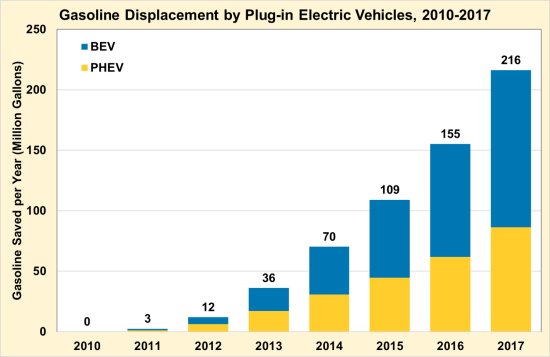 See my critique of this study published today on Seeking Alpha: https://seekingalpha.com/article/4207799-argonne-wrong-gasoline-consumption-reduction-evs-united-states-2010minus-2017