US tight oil production increased in 2017, accounting for 54% of total US crude oil production, in part because of the increasing productivity of new wells, according to the US Energy Information Administration (EIA). Since 2007, the average first full month of oil production from new wells in regions tracked by EIA’s Drilling Productivity Report (DPR) has generally increased. 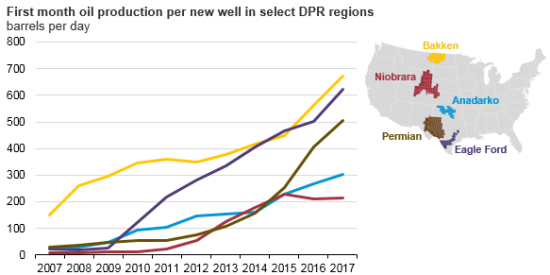 These growing initial production rates have helped tight oil production to increase despite slowdowns in drilling activity when oil prices fell. The average new well in each DPR region in 2017 produced more oil than wells drilled in previous years in those same regions, a trend that has persisted for nearly ten consecutive years.

More effective drilling techniques, including the increasing prevalence of hydraulic fracturing and horizontal drilling, have helped to increase these initial production rates. In particular, the injection of more proppant during the hydraulic fracturing process and the ability to drill longer horizontal components (also known as laterals) have improved well productivity, EIA said.