Meritor will supply high-efficiency and lightweight axles, drivelines and brakes that maximize system efficiency, extend range and increase payload. Electric drivetrain power and control systems, as well as batteries and accessories, will be supplied by TransPower, a California-based manufacturer of integrated drive systems, full-electric truck solutions and energy-storage subsystems. Meritor has a strategic investment in TransPower and is the exclusive commercial distributor of these systems.

(At WasteExpo 2017, Peterbilt displayed a Model 520 refuse truck equipped with the Transpower ElecTruck drive system, which has accumulated over 80,000 miles of Class 8 heavy duty use in a variety of commercial applications since 2013. The ElecTruck system uses high-power electric motors, inverters and batteries to power commercial trucks weighing as much as 80,000 lb.)

The electric drivetrain systems utilized by these trucks is specifically tailored to the needs of drayage and refuse applications. The flexible design of the system allows it to be customized for many other duty-cycles and vocations.

This collaboration with Peterbilt reinforces the viability of our advanced technology and electrified solutions that are adaptable for a wide range of applications. We look forward to getting these vehicles on the road this summer.

Testing will last approximately one year and is designed to prove out the ranges, operating hours and charging requirements of vehicles operating in real-world service conditions alongside conventional diesel-fueled trucks. The 80,000-pound, short-haul Peterbilt 579 drayage trucks will support operations at ports throughout California, including Los Angeles, Long Beach, San Diego, and Oakland. Two 520 refuse haulers will be tested by Sacramento County and a waste hauler will operate one truck.

The deployment of 12 Peterbilt 579 trucks is being funded by the California Air Resources Board and a consortium of California’s regional air quality districts, including the South Coast Air Quality Management District, Bay Area Air Quality Management District and San Diego Air Pollution Control District. Funding for the Peterbilt 520 deployment was provided by the California Energy Commission.

UQM for e-axles. After a successful development program, Meritor has chosen UQM as its strategic supplier for the 14Xe full electric axle system for the medium- and heavy-duty commercial vehicle market. Electric axles integrate electric motors into differentials or wheel-ends. Meritor and UQM have worked together for more than a year in a strategic alliance (earlier post) to develop this new technology that includes integrated mechanical drivetrain components from Meritor with electric motor, controls, and software from UQM. 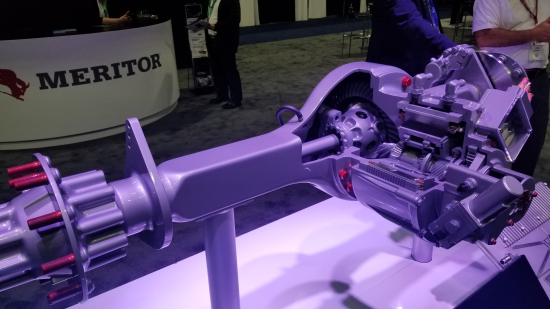 Functional testing has begun in 2018 with anticipated production beginning in 2019. UQM and Meritor are supporting prototype deliveries for testing, as well as initial pilot electric axles.

The development program between the two companies was initially announced in February 2017. Meritor unveiled its electric axle at the 2017 NACV Show in Atlanta as part of its electrification platform rollout (earlier post), and has begun trials with key customers. The benefits of the 14Xe axle application will allow customers in the medium- and heavy-duty EV commercial markets to improve on component packaging requirements, realize cost savings from integration and increase vehicle performance.

It has been a long and rewarding process to unveil this electric axle, and we are looking forward to the on-going development of this long-term relationship in support of Meritor’s 14Xe axle strategy. This announcement falls in line with UQM’s overarching strategy of focusing on design and development and serving the market with a proven Tier 1 OEM.

Looks like Tesla is driving innovation as expected. Great to see it!

This has nothing to do with Tesla. If you read the article, aspects of this have been in real-world proving (something Tesla doesn't seem to realize that they need to do) since 2013 and the production components were revealed last year with production starting next year.

Meritor being involved in this, is huge, given the number of on-highway trucks in North America that use Meritor suspension and brake components.

I am sure the outcome of this will be functional and reliable, will be offered with realistic performance expectations, and will actually be available on the market roughly on the stated timeline.

Waste-collection trucks are a good application for this due to relatively short daily mileage but a tremendous number of starts and stops.

UQM motors are expensive, they are used to government contracts.

Brian P:
Disagree; I don't think any of the truck makers or part suppliers would bother releasing electric drive related data or announce any EV type products unless they are pushed to do it. Business as usual and continuing the status quo is too much to an legacy truck industry incumbent's advantage.

Tesla's semi is a clear and present threat to truck industry profits.

Perhaps the existence of Tesla as a competitor gives some motivation, but this will be commercially available before Tesla gets theirs in production. It also remains to be seen if Tesla's system lives up to its promise in the real world.

All of this is contingent upon the availability of suitable batteries in large enough quantities and low enough cost, and that threshold is somewhere near being crossed right now.

Electric powertrains are already on the market in buses, and trucks in the next smaller class (MitsubishiFuso Canter). MercedesBenz has been quite a bit more conservative in their performance promises ...

It's one thing for it to be available, quite another to get actual customers to buy into the concept.

All electric/battery units would need tons of slow charge batteries for the same 1200+ miles range.