Hamburger Hochbahn AG has ordered 20 of the new Mercedes-Benz battery-electric Citaro city buses. (Earlier post.) The first two units will be handed over before the end of this year. 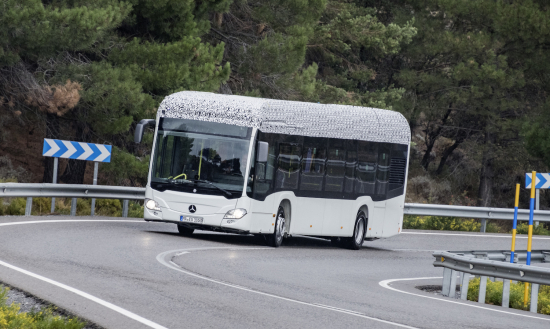 The first major order for our fully electrically powered, emission-free Citaro has been received even before the official premiere, demonstrating the confidence transport operators have in our concept for electromobility in urban public transport. With the Citaro, we are bringing a major component on the way to locally emission-free bus traffic to market.

—Till Oberwörder, Head of Daimler Buses

The new, fully electrically powered Citaro will enter series production before the end of this year. The drive system of the new all-electric Citaro is based on the ZF AVE 130 electric portal axle with electric motors at the wheel hubs, as previously deployed in other variants of the Citaro. Peak motor output is 2 x 125 kW, while torque is 2 x 485 N·m. 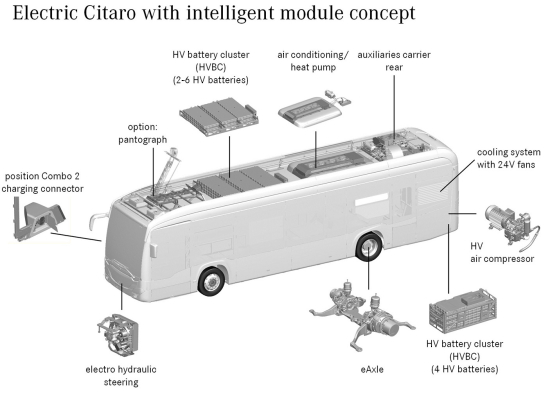 The modular battery packs offer a total capacity of up to 243 kWh. The batteries are cooled to the ideal temperature for maximum charge, maximum usable capacity and a long service life. The batteries are charged at a connector in the bus depot. After the series start-up of the Citaro, further variants for intermediate charging en route will become available.

The new, fully electrically powered city bus is based on the globally best-selling Mercedes-Benz Citaro. This has now notched up sales of more than 50,000 units over two generations, is in operation in almost all major western and central European cities.

Hamburger Hochbahn AG services 111 routes and 1,327 bus-stops with around 1000 buses. These carry around 212 million passengers each year.

In 1997 the Hamburg-based operator was one of the premiere customers for the first generation of the Mercedes-Benz Citaro low-floor city bus. To date Mercedes-Benz has delivered more than 1,000 Citaro buses to Hamburg.

Together with high cost of fuel, drivers salaries are pushing operation cost upwards year after year.

Driverless units could help to solve half the problem and more but it may not be around much before 2030 or so.

Could variable size articulated e-units, (going from 2 or 3 units to one unit to match passenger loads) solve the other half of the growing operating cost problem?

Prior to the '50s, many U.S. cities were served by electric trolleys, trains and buses, using overhead wires; Driven by fossil fuel special interests, internal combustion engine(ICE) transportation replaced these devices. Now, experience has proven ICE vehicles were the wrong path to take and continue.

Electric mass transit is now roaring back; only this time it's here to stay, especially with the flexibility BEVs provide.

I positively loathe low-floor buses, including in particular the Mercedes Citaro.

The interior is cramped and like a 3D maze. In winter operation with huge jackets and school bags, it is nearly impossible to get around.

The windows are so high that your elbow is below the window sill. This sounds like a minor thing but is actually a major inconvenience and space- and comfort-reducing factor. Having the elbows, which is typically the widest point of the body of a person, above the window sill effectively gives 2'' extra seating width.

If the buses didn't have to be low-floor, you'd naturally place all the heavy, bulky equipment low, improving the handling of the bus and the serviceability.

I'm wondering why a 12 tonne bus should have less power than a Tesla..? A bit more zip to the buses (with CPU-controlled acceleration profile to minimize the jerkiness of the bus) would improve their operation and adapt better to the other city traffic.