Eurostat estimates that in 2017, CO2 emissions from fossil fuel combustion increased by 1.8% in the European Union (EU), compared with the previous year. CO2 emissions account for around 80% of all EU greenhouse gas emissions and are influenced by factors such as climate conditions, economic growth, size of the population, transport and industrial activities. 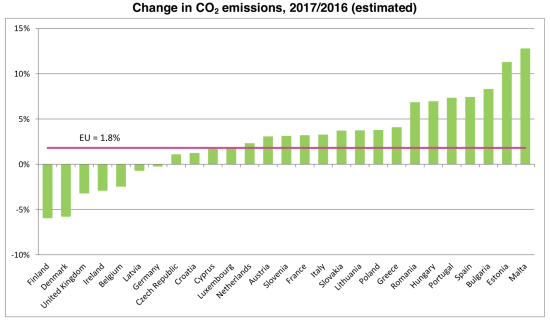 Eurostat computes early estimates of CO2 emissions from energy use based on monthly energy statistics and using a harmonized methodology. These data may slightly differ from those published nationally. Eurostat is the statistical office of the European Union.

Surprise: Germany the largest and most productive country in EU, often accused of burning to much coal and using to many diesels by many posters, is doing better than 66% of all other EU countries.

Obviously - if you can diesel, you can expect CO2 to go up in the short term UNLESS you can afford Norway level subsidies for hybrids and EVs.

+ Norway gave free use of bus lanes and tolls and parking - who could resist such a bribe set.