Velocys plc, a developer of microchannel Fischer-Tropsch (FT) biorefineries, has received a “notice to proceed” action to commence manufacturing the FT reactors and catalyst for the Red Rock Biofuels LLC (RRB) biorefinery that will be located in Lakeview, Oregon. RRB has begun construction of the biorefinery, which will incorporate Velocys’ technology, and produce low-carbon, renewable diesel and jet fuel. Velocys’ role will be as a licensor for its technology to the project.

The contract represents Velocys’s second commercial license, the first being to ENVIA for a gas-to-liquids plant. (Earlier post.)

RRB is a subsidiary of IR1 Group LLC, which has 325 million gallons of installed biofuels capacity. The biorefinery in Lakeview will convert 136,000 tons of forestry residue into 15 million gallons per year of renewable transportation fuels including diesel and jet fuel. Enough jet fuel will be produced by the plant to fuel 1,800 round trips per year from Portland, Oregon to San Francisco.

By using forest and sawmill residues, RRB’s biorefinery will not only avoid competition for agricultural resources, but also reduce the risk of catastrophic wildfires by removing waste biomass from overgrown forests. It will also help to regenerate the local forestry industry.

RRB has in place contracts from several airlines (Southwest Airlines and FedEx as offtake partners) to purchase 100% of the jet fuel produced each year.

RRB’s Lakeview project is expected to deliver around $15 million revenues to Velocys during the construction and early operation stages of the plant, and an additional $30 million or more over the life of the biorefinery. More than $6 million has already been invoiced and received from RRB.

With broad international agreement in the aviation industry for carbon-free growth beyond 2020, airlines are actively seeking low-carbon jet fuel to reduce their greenhouse gas emissions. The civil aviation industry alone will require around 1.5 billion gallons per year of new renewable jet fuel production capacity to meet this commitment.

This is a very important milestone for Velocys, our second commercial license sold; our first licence being ENVIA. Our technology positions us at the forefront of this huge market opportunity. RRB’s success is a significant milestone for the sector, one that further demonstrates the market’s appetite for renewable transportation fuels. The successful funding of this project is a validation of the commercial viability and bankability of Velocys’ technology. The licensing of our technology to RRB is complementary to our strategy to develop our own biorefineries, the first of which will be located in Natchez, Mississippi.

Conventional FT plants are only economically viable at large scales—30,000 barrels per day (bpd) or more. Velocys’ microchannel FT technology is commercially optimal at capacities of as low as 1,400 bpd (around 19 million gallons per year), making it an ideal choice for biorefineries using low density woody feedstock that would be uneconomic to transport over long distances to a large scale central processing facility. 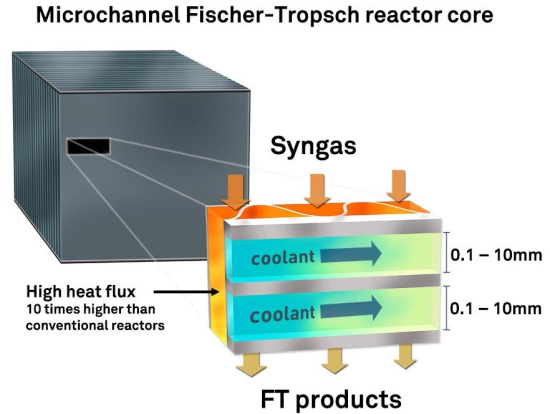 In Velocys’ microchannel FT reactors, thousands of process channels with dimensions in the millimeter range and filled with catalyst are constructed immediately adjacent to water-filled coolant channels. The small-size channels dissipate heat more quickly than in conventional FT reactors. As a result, more active catalysts can be used. 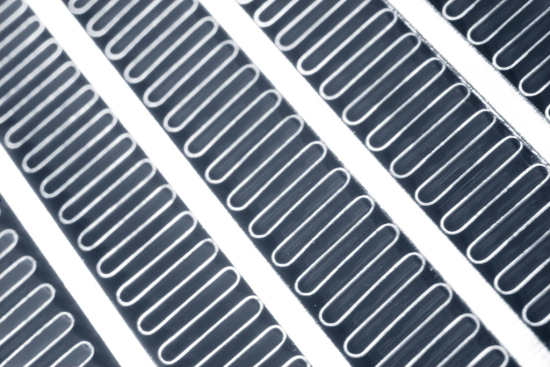 Channels in an FT microchannel reactor.

The figures pencil out to about 110 gallons per ton.  At perhaps 3 kg of fuel per gallon, this is a mass-conversion ratio of around 30-35%.  Even if the products are pure hydrocarbons, that still means lots of carbon loss in the process (biomass feedstocks are 40-45% carbon by dry mass, depending whether they're woody or herbaceous).

The high heat release in FT synthesis means energy is being thrown away.  That should be suspect.

Unless the application requires high energy density or other properties, hydrocarbons are probably not a good choice of product.  We need to be aiming for commodity products which (a) contain as much of the feedstock carbon as possible, and (b) embody the most energy per unit carbon.  Right now the winner is methanol, at 726 kJ/mol carbon.  Ethanol is more than 10% worse, and F-T hydrocarbons are way worse than EtOH.

Some FT systems can be configured to co-produce electricity from the waste heat generated from the process. Not sure if this particular system is conducive to the co-production of electricity, but it would be a good way of utilizing the waste heat if it is.

Some say bio can not provide all the fuel, so forget it.

Using the waste heat for high temperature electrolysis of H2O to H2 and of CO2 to CO could improve conversion rates further with relatively low electricity use.

Even now, those are impressive results to convert waste to fuel.
Not only forestry waste but also municipal waste should be converted.

SJC, if you'd bother to do the math you'd easily confirm that there is nowhere near enough biomass to "provide all the fuel".  Not even the "Billion-Ton Vision" papers say biomass can provide it all.  They don't even say it can provide a majority of gasoline.

The fact of the matter is that there isn't enough biomass for biofuels to do the heavy lifting.  Something else has to take that role.  Biofuels can take the niche applications where the heavy-lifters don't work well, like aircraft and off-road.

Good points by EP. I have heard the RRB process will also produce naphtha, which improve the numbers a bit.

Since carbon is the limiting factor, the figure of merit has to be useful energy out per unit carbon in.  Naptha is way down the list.  Naptha made via autothermal gasification of biomass... way, WAY down the list!