With the market launch of the new A-Class (earlier post), the new diesel engines from Mercedes-Benz are now available from the compact class to the luxury class. With these engines, Mercedes-Benz vehicles achieve average NOx emissions of between 40 and 60 mg/km over many thousands of kilometers of driving on the road under the conditions of the Real Driving Emissions (RDE) measuring method. These emissions are significantly below the RDE limit of 168 milligrams per kilometer.

This is made possible by an innovative package of combining engine technology and exhaust-gas aftertreatment, which has been introduced consistently over the past two years as part of the new generation of engines and is continuously being developed further. Mercedes-Benz’ goal “is to arrive at average NOx emissions of around 30 milligrams per kilometer in RDE Stage 2 tests by 2020,” http://media.daimler.com/marsMediaSite/en/instance/ko/State-of-the-art-diesel-technology-from-the-A--to-the-S-Class-Latest-Mercedes-Benz-diesel-technology-with-NOx-emissions-significantly-below-certification-limits.xhtml?oid=40361757&ls=L2VuL2luc3RhbmNlL2tvLnhodG1sP29pZD00ODM2MjU4JnJlbElkPTYwODI5JmZyb21PaWQ9NDgzNjI1OCZib3JkZXJzPXRydWUmcmVzdWx0SW5mb1R5cGVJZD00MDYyNiZ2aWV3VHlwZT10aHVtYnM!&rs=1 Ola Källenius, Member of the Board of Management of Daimler AG, responsible for Group Research and Mercedes-Benz Cars Development. “And we are determined to achieve averages approaching 20 milligrams in the following years.”

Mercedes-Benz’s new generation of engines already demonstrated two years ago, how the NOx-challenge in Diesel cars can be solved technically. We are fully committed to modern diesel engines as part of the drive mix for the future. 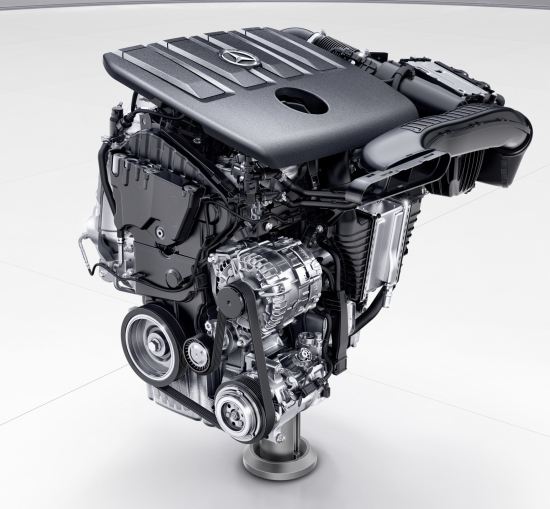 As is already the case with the OM 654 and OM 656, the OM 608 engine features a compact exhaust-gas aftertreatment system close to the engine as well as multiple exhaust gas recirculation (EGR) with high- and low-pressure EGR, which ensures that average NOxnitrogen-oxide emissions are significantly below the current legal limits of the new RDE test method. For the first time, this model series also features an SCR catalyst with AdBlue exhaust fluid. Mercedes-Benz now offers this technology in all current vehicle classes.

In the coming months, many more Mercedes-Benz models will be launched that are certified in accordance with Euro 6d-TEMP. By September 2018, more than 30 of the currently available models and more than 200 variants are to be changed over to Euro 6d-TEMP Norm (RDE Stage 1)—a full year before this is mandatory for all vehicles.

Current Mercedes-Benz vehicles equipped with the latest diesel technology can achieve NOx emissions in a very low double-digit and sometimes even single-digit range in some RDE-measurements on the road. For example, the technical inspection company TÜV Hessen tested a wagon version of the new C-Class with a new 1.6-liter four-cylinder OM 654 engine according to the currently applicable RDE regulations, and measured nitrogen-oxide emissions below 10 milligrams per kilometer in the overall cycle, both with and without cold starts.

When a sedan version of the new C-Class with the same engine was tested in accordance with the RDE method, NOx emissions of approximately 10 milligrams per kilometer were measured.

However, average emissions over many thousands of kilometers under different conditions are much more meaningful than individual measurements, the company said. Mercedes-Benz diesel engines of the new generation (OM 654, OM 656 and OM 608) already achieve average NOx emissions of about 40 to 60 milligrams per kilometer on RDE journeys—also in city traffic. These NOx emissions are thus well below the current RDE limit of 168 mg/km and even below the laboratory limit of 80 mg/km. Organizations such as Dekra, TÜV and auto magazines have confirmed that very good results are achieved in road tests.

At low levels of engine load—e.g., while driving slowly—the effectiveness of exhaust-gas aftertreatment can be substantially enhanced due to the close proximity of the system to the engine and further developed exhaust-gas temperature management, thus significantly increasing the system’s effectiveness in the city.

Mercedes-Benz has already had the crucial innovations in the further development of diesel technology in series-produced cars for two years. The four-cylinder diesel engine OM 654 with a combination of exhaust-gas aftertreatment close to the engine, stepped combustion bowls and further developed multiple exhaust gas recirculation was already introduced in the Mercedes-Benz E-Class in April 2016. Since then, Mercedes-Benz has systematically adapted its product portfolio to the new generation of diesel engines. For that purpose, the company has invested approximately €3 billion (US$3.6 billion) in research and production.

It is now also the turn of the C-Class, the company’s strongest-selling model series. With the changeover to the OM 654 diesel engine, the all-new 1.6-liter version is used for the first time. In the future, a diesel plug-in hybrid will also be added.

The diesel fightback continues: first Bosch, now this.
We can expect BMW as well - Audi seem to have new egg on their face, but they'll get over it.
The problem is what to do with all the existing diesel vehicles in cities; can they be cleaned up, or do they need to be replaced (or converted to natural gas).
If they have to be replaced, can we get a rational sequence for retiring them, or do we just do it by model year.
The main thing is to get the worst polluters off the roads soonest.

There is really no new hardware presented by Bosch, as many on this site seem to believe. Bosch has just optimized a concept that has been used for a couple of years. VW introduced this technology in 2014 (presented in a paper in the MTZ journal) for the heavier vehicles (smaller cars use only LNT, i.e. no SCR). Note that this was a later engine generation the one that got caught in the USA and also later than the Euro 5 engines that were in the grey zone and needed recall. In a most generous assessment, one could say that Bosch concept represents the second generation of this concept and that they have developed this to perfection by improvements in detail and better software control under all operating conditions. A few hardware features:
• Multi-way EGR (both high-pressure and low-pressure EGR). In the VW case also VVT that give some internal EGR (presumably, the engine used by Bosch does not have this).
• Clouse-coupled aftertreatment. This gives a 30 deg. C increase in exhaust temperature compared to underfloor SCR, according to a paper by Mercedes.
• SCR on DPF (instead of a separate underfloor SCR catalyst)
• LNT catalyst before DPF)
Apparently, Mercedes does not use an LNT. Perhaps they do not need it. Moreover, they claim in an MTZ paper that they need no catalyst heating strategy at cold-start, i.e. no fuel penalty.

Besides Mercedes, and VW group to some extent, the best on-board emission results come from BMW. In contrast to Mercedes, BMW use LNT plus separate underfloor SCR. The disadvantage is lower SCR temperature but perhaps they use the LNT to avoid this problem. I presume it requires much software calibration to perfect the system. Surprisingly, BMW does not use long-route EGR on their newest engines. Perhaps they do not need it. Instead, they use twin-turbochargers also on the lower rated engines. This improves transient behaviour and also reduces NOx spikes and, in combination with LNT, LR-EGR is not needed.

All-in-all, improvement of SCR catalysts (lower “light-off” temperature) over the last years has led to that urea hydrolysis is now a limiting factor; not the SCR catalyst itself. You have to make ammonia from urea and this cannot be done under a certain temperature threshold. Off-line treatment of urea via a heated catalyst could be one way of further improvement, or else, storage of ammonia in a different way than urea (e.g. Amminex). In a recent article in ETI, Loughborough University claims they can come down to 60 deg. C but perhaps this number should refer to a decrease in light-off temperature rather than absolute number. A break-through of one of these concepts might drastically reduce NOx emissions further.

Besides the improvement above, there is also additional potential in both internal and external EGR that has not yet been exploited. Thus, engine-out NOx can be reduced, most likely without any fuel penalty. An additional advantage is lower urea consumption.

For increasing exhaust temperature, the most obvious improvement is downsizing. Instead of a 4-cylinder 1.6-liter engine, a 3-cylinder 1.2-liter engine could do the job. A mild hybrid system plus additional e-compressor can increase power and facilitate good drivability. 150+ hp is not impossible from such a small engine or ~120 hp with a single turbo from a lower rated engine. Extended engine stop periods (over conventional start-stop) will avoid cooling of the catalysts due to low exhaust temperature at low engine loads.

If nothing of the above helps, an electrically heated catalyst can increase exhaust temperature and shorten warm-up. Also, an additional underfloor SCR catalyst with second urea/ammonia injection after the SCR/DPF could further reduce NOx under some operating conditions.

The emission problem of diesel cars has never been a technical issue. Of course, SCR technology was new in this application and need some time to mature but mostly, the car manufacturers have not done their homework properly and they have also exploited loop-holes in the current regulation. State-of-the-art technology today goes beyond potential Euro 7 limit (assuming ~35 mg/km in WLTP and ~50 mg/km on-road). A level of <20 mg/km is certainly possible in a couple of years for all cars since some cars today already reach this level. This would be a substantial improvement over the on-road limit of 168 mg/km that comes into force in September 2018.

I would like to add a reservation regarding very low on-board NOx levels. In general, on-board instruments are not as “good” as laboratory instruments. On-board instruments must be much smaller than laboratory instruments and the (instrument) manufacturers have to cut some corners somewhere. As an example, Horiba’s laboratory NOx instruments have a 10-fold lower range and, presumably, corresponding detection limit than their on-board instrument. If you are at, or close to, the detection limit, only a small error in instrument calibration against the calibration gases (as you have to do prior to any measurement) will give a small offset; low or high. This means that the average level over the test cycle might be a little higher; or lower. I would assume that at ~20 mg/km you are close to the detection level for current on-board instruments. In an extreme case, and taking all other variation into account, you could one day get 30 mg/km and the second day you could get 10 mg/km, since you might have up to +/- 10 mg/km in scatter. Therefore, I am cautious when people start to talk about single-digit NOx levels from on-board measurements. For sure, it will be possible to improve on-board instruments further in the future but perhaps we should only say that a level below ~50% of the Euro 6d “final” RDE limits of 120 mg/km (diesel) and 90 mg/km (gasoline), let’s say <50 mg/km, is just “very low” and not try to distinguish between different cars below this level. Moreover, if we cannot measure the levels, we should be happy and conclude that the cars are clean.