Researchers from Virginia Tech developed an in vitro artificial enzymatic pathway that can produce hydrogen at extremely high rates by splitting water energized by carbohydrates (e.g., starch). As reported in a paper in the RSC journal Energy & Environmental Science, the pathway delivered up to a 1,000-fold enhancement in volumetric productivity of hydrogen, achieving a milestone of more than one gram of hydrogen per liter per hour. 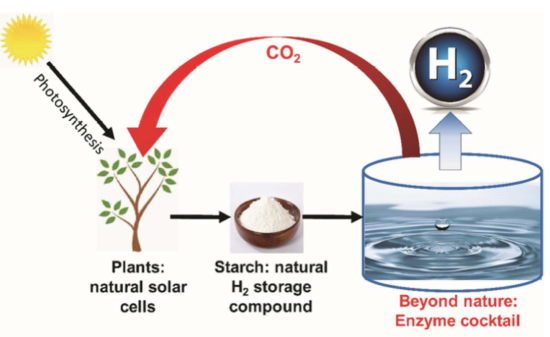 With a volumetric productivity of more than 1.0 g H2/L/h achieved, an anaerobic bioreactor of 62.5 m3 could produce 1,500 kg H2 per day, the researchers concluded.

It is highly expected that green, cost-competitive, distributed H2 will be produced via water splitting powered by solar energy directly or indirectly. Hydrogen production via high-speed water splitting may be energized by renewable carbohydrates (e.g., starch and biomass, a point energy source) with in vitro artificial enzymatic pathways other than nonpoint energy sources (e.g., insolation with an average energy flux of ~200 W/m2), along with other benefits, such as low H2 transportation costs, easy H2 harvesting, and low capital expenditure of distributed H2 generation bioreactors.

… the theoretical H2 yields of dark fermentation are two or four H2 per glucose, called the Thauer limit, depending on the catabolic pathways and fermentation conditions. Although intensive efforts in H2-producing microorganisms by metabolic engineering and synthetic biology they cannot break this limit due to the basic bioenergetics and thermodynamics of living organisms.

… In vitro enzymatic H2 production systems have been demonstrated to split water energized by carbohydrates and catalyzed by enzymatic pathways comprised of more than ten enzymes. This approach is one of the most promising means for distributed H2 production because it achieves the theoretical yield of hydrogen generation, i.e., 12 moles of H2 from one mole of hexose along with water, with potentially-high volumetric productivities. Because carbohydrates are produced through plant photosynthesis, this indirect water splitting energized by carbohydrates is nearly carbon-neutral in terms of the whole life cycle. Recent efforts have expanded the types of carbohydrates, such as, glycogen, starch, and biomass sugars. These efforts have also led to great increases in volumetric productivity, as well as decreases in biocatalyst costs through utilization of thermostable enzymes with facile heat treatment purification, enzyme immobilization, and replacement of costly coenzymes.

However, these in vitro enzymatic pathways are based on prohibitively expensive and unstable NADPH, which is generated from the pentose phosphate pathway (PPP). A major breakthrough urgently needed to replace NADP with the much more stable and less costly NAD, and that was one of the goals of this study.

The latest work, led by senior author Yi-Heng Zhang (now at the Tianjin Institute of Industrial Biotechnology) represents an evolution of work in which he and his colleagues demonstrated in vitro synthetic enzymatic biosystems to generate theoretical yields of hydrogen energized by numerous carbohydrates. (Moustafa et al. 2016)

Despite the results, the approach faced barriers to scale-up, including enzyme production cost; enzyme stability; coenzyme cost and stability; (slow) reaction rates; and scale-up feasibility. The latest work address those issues at the laboratory scale.

The highest reaction rate of 530 mmol H2/L/h was accomplished at 80 °C. Two NAD-conjugated dehydrogenases were further applied to enable nine-day hydrogen production with a total turnover number of NAD of more than 100,000, along with hyperthermophilic enzymes.

The researchers attributed the very significant increases in volumetric productivity to numerous factors, including the use of hyperthermophilic enzymes that allow increased reaction temperatures, thereby increasing enzyme activities and decreasing H2 solubility and H2 inhibition and the introduction of biomimetic NAD-based ETC to facilitate electron transfer.

Other factors included optimizing fast electron transfer, optimization of the enzyme ratios by mathematical modeling, and the use of highly active enzyme BioBricks.

It is anticipated that volumetric productivity of H2 could be enhanced by another order of magnitude in a few years by 1) developing more efficient enzyme complexes, including SHI and dehydrogenases, 2) the use of small and more stable biomimetic coenzymes for better mass transfer) the use of enzymes with higher specific activities, for example, the replacement of [NiFe]-hydrogenase SHI with a more active [FeFe]-hydrogenase, and 4) the construction of thermostable multiple-cascade enzyme machines such as the Krebs cycle metabolon.

Cost analysis. The team performed an economic analysis using the H2A production model from the US Department of Energy (DOE). The hypothetical 1,500 kg H2/day of the plant will be produced from 10,125 kg of starch and 7,875 kg of water catalyzed by 15 kg of enzymes needed.

This study was mainly supported by the Department of Energy, Office of Energy Efficiency and Renewable Energy, Fuel Cell Technologies Office under Award Number DE-EE0006968.

Posted on 09 May 2018 in Biotech, Hydrogen, Hydrogen Production | Permalink | Comments (0)