Purdue engineers have used upcycled low-density polyethylene (LDPE) plastic to boost the lifespan of lithium-sulfur batteries. They first prepared porous sulfonated carbon (PSC) from LDPE plastic via microwave-promoted sulfonation. The microwave process not only boosts the sulfonation reaction of LDPE but also induces huge amounts of pores within the sulfonated LDPE plastic.

When a PSC layer was utilized as an interlayer in lithium–sulfur batteries, the sulfur cathode delivered an improved capacity of 776 mAh g–1 at 0.5C with cycle retention of 79% over 200 cycles. In a paper in ACS Applied Materials & Interfaces, the team attributes these results to two materialistic benefits of PSC: (a) porous structure with high surface area and (b) negatively charged conductive scaffold. 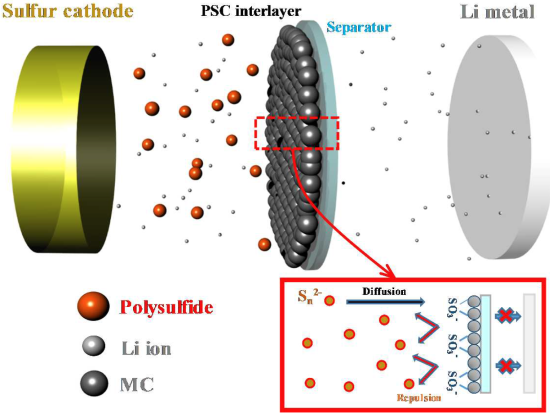 They found that these two characteristics not only facilitate the improved electrochemical kinetics but also effectively block the diffusion of polysulfides—a major issue with lithium-sulfur cells.

Elemental sulfur, as one of promising cathode materials, can offer a theoretical capacity of 1672 mAh g-1 and high energy density of 2600 W h kg-1 at a low cost, when it is coupled with metallic Li anode. However, systemic problems of lithium sulfur (Li-S) batteries are associated with polysulfide shuttling effect and poor Coulombic efficiency. In addition, insulating nature of elemental sulfur deteriorates the fast electron transport and thus leads to the poor utilization of sulfur electrode. These main challenges plague the practical utilization of sulfur cathode in commercial battery market.

In order to tackle fundamental issues mentioned above, two main approaches have been intensively attempted by a) putting sulfur into meso-/microporous carbon, and b) optimizing carbon scaffold with functional polymers or hydrophilic functional groups. These two strategies have shown promising results in inhibiting the polysulfide shuttling effect and enhancing the electrochemical reactions. However, each process to optimize the carbon scaffold with functional polymers and carve functional groups on the surface of carbon is too complicated and requires expensive and elaborate techniques. In addition, since nonpolar carbon itself has no chemical affinity with polar polysulfide, it is vulnerable to locally anchor the polysulfides within pores over cycles. In these regards, the development of carbon materials, which have high porosity and chemical interaction with polysulfides, at a rational price has become a crucial part of advancing the practical utilization of Li-S cell.

… Low density polyethylene (LDPE), which is predominantly used as a packaging film and takes a big portion of total plastic waste, also increasingly employed and disposed without recycling and reuse. In order to exploit the resource abundance of LDPE plastic waste and change it into more valuable materials, many attempts have been approached by converting LDPE plastic into carbon materials via a sulfonation process. Pristine LDPE itself cannot produce any carbon residue or char after pyrolysis, due to its poor thermal stability and low melting temperature. On the other hand, sulfonated-LDPE which obtains infusibility from being cross-linked with sulfonate groups can yield amorphous carbon after pyrolysis.

In this study, we first present an effective strategy of preparing porous sulfonated carbon (PSC) from LDPE plastic via microwave-promoted sulfonation and demonstrate its materialistic potentials to Li-S batteries.

The researchers soaked a plastic bag into sulfur-containing solvent and put it in a microwave to cheaply provide the quick boost in temperature needed for transformation into low-density polyethylene. The heat promoted the sulfonation and carbonization of the plastic and induced a higher density of pores for catching polysulfide. The low-density polyethylene plastic was then made into a carbon scaffold to divide the lithium and sulfur halves of a battery coin cell. 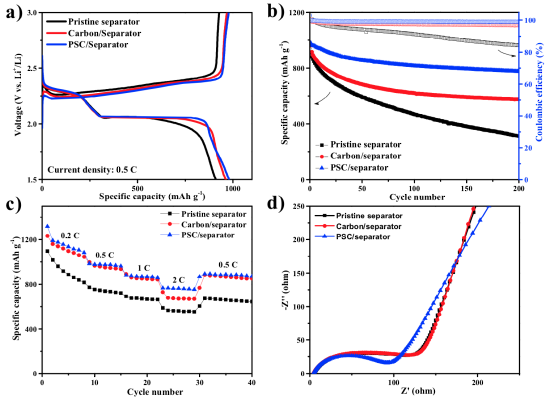 Electrochemical characterization. The performance of sulfur cathode electrode with a pristine separator, a carbon/separator, and a PSC/separator were evaluated. (a) Initial voltage profiles; (b) cycle performances; (c) rate capabilities; (d) Nyquist plots of each electrode. Kim et al.

The next step for the team is fabricating a larger battery utilizing this concept.

This research was funded by the Naval Enterprise Partnership Teaming with Universities for National Excellence Center for Power and Energy Research at Purdue.

EVs with small batteries and daily recharges may have to change this battery every 7 months or so?

Not yet suited for BEVs?

If they can make it work, ,we can start using the mountains of sulfur produced as a byproduct of refining oil into fossil fuel.

They found carageenen from sea weed makes a good cathode binder, if they can find out why they might be able to synthesize an even better material.